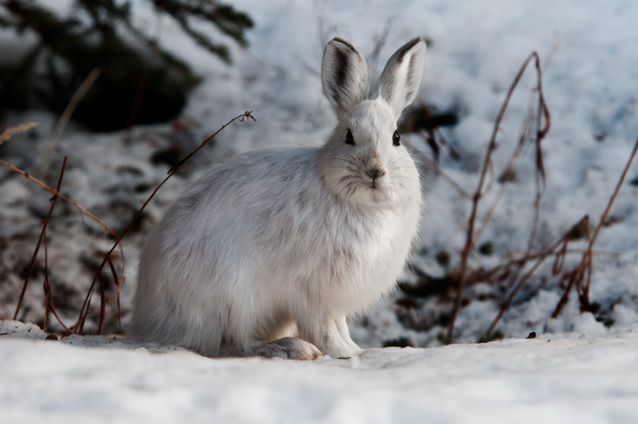 The Snowshoe Hare (Lepus americanus) is a resident of upper North America from Alaska across Canada and stretching south along mountainous areas of California, New Mexico and the Appalachians. Also called a Varying Hare or (erroneously) a snowshoe rabbit the Hare’s name is readily apparent do to its very large hind feet.

As their name says their large feet enabled the hares to walk on top of snow just like a person wearing snow shoes does, their weight being spread out over a larger area. Long hairs on the bottom their feet also aid the Snowshoe Hares to walk on the cold snow by offering insulating protection and traction. 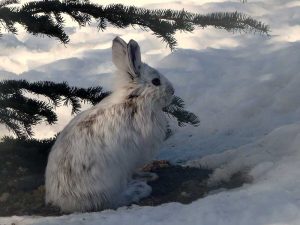 Snowshoe Hares do not hibernate so they have several other characteristics to help them tough it out through the winter. Their three layer fur coat provides plenty of warmth in Winter and changes color with the seasons going from a mottled brown and gray in the warm months to all white in the winter except black spot one their eyes and at the top of their ears. These black spots are handy to confuse predators as to which way the Hares are looking. Their ears are also shorter than most other Hares as a way to regulate heat loss.

In both Winter and Summer the Hares prefer younger tracts of forest or riparian areas where there is plenty of undercover to hide among. The dense brush doesn’t allow snow on the ground also helps further by retaining heat since the Hares do not burrow like rabbits do. 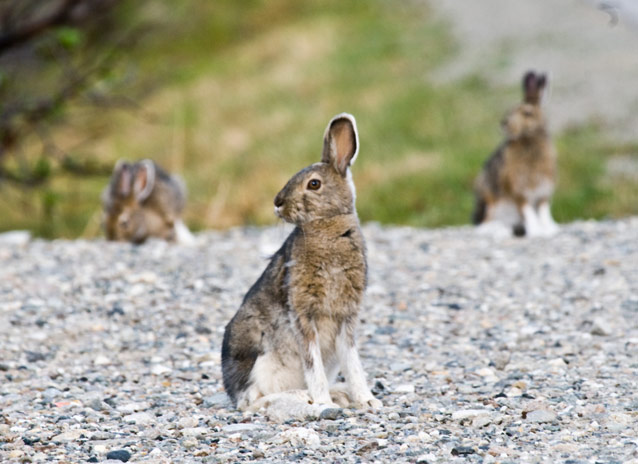 The Hare’s diet also follows the seasons. In summer they dine on berries, dandelions and green leaves. In Winter the Hares forage on top of the snow pack eating twigs and branches of young trees and will even chow down on pine needles if necessary. You can spot where a Hare has been grazing in winter by observing the “Hare Line” about a foot off the ground where they have removed bark and twigs along lower part of the trees. When food is scarce the Hares will even dine on carrion.

When the Hares aren’t eating they are probably trying to avoid being eaten by several varieties of predators. Lynx and Bobcats are the Snowshoe Hare’s main nemesis and their populations usually coincide with one another. Besides the smaller cats the Hares are also on the menu for Mountain Lions and several flying predators such as Owls, Hawks and Eagles.

Luckily, besides their great built in camouflage the Hare’s can rely on their big feet to escape trouble either by running up to 27 miles an hour, leaping 12 feet in a single bound or even swimming to safety using their big feet like swim fins. 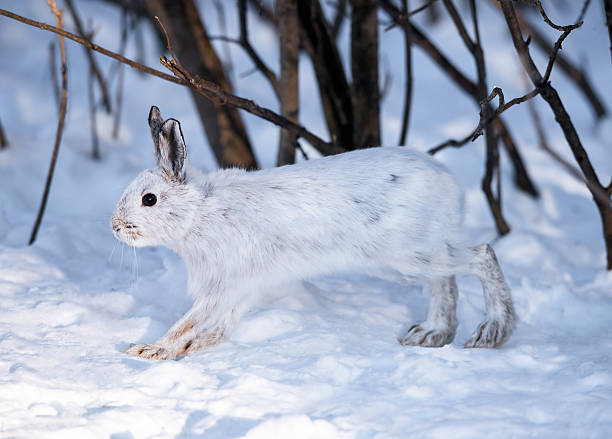