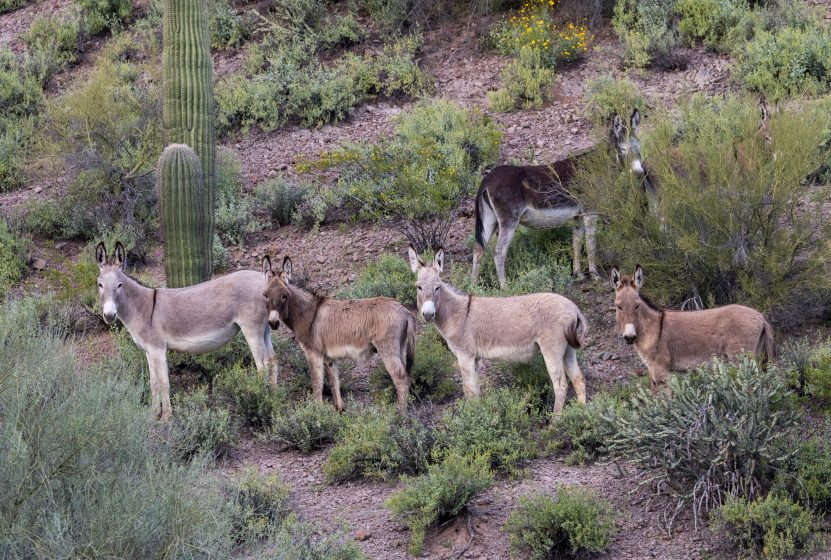 The wild burro (Equus asinus asinus) is a resilient member of the horse family that has evolved to thrive in hot, arid climates. While some biologists assert the burro is an invasive species, this stout and intelligent creature has survived in harsh desert conditions for more than 400 years.

The term “burro” is derived from the Spanish word “borrico,” meaning donkey. The donkey evolved from the wilds of northern Africa and was domesticated as a pack animal. Donkeys were revered for their ability to carry cumbersome supplies and trade goods through barren terrains throughout Africa.

Around 2,000 years ago, the donkeys were used to transport goods across the Middle East, Greece, and Italy. Their ability to carry heavy loads and sure-footed agility in mountainous terrain led to the Roman army utilizing them in their campaigns to conquer Europe.

Centuries later, Spanish explorers brought their borricos to South, Central, and North America. By the early 1500s, the modern burro’s direct ancestors had stepped foot on the American continent.

Modern wild burros vary in coat color, from dark brown to gray. They have a distinctive dorsal stripe that resembles a cross covering their shoulders and back. Burros have dark earmarks and a lighter color around their muzzle and eyes. Most have a white or lighter-colored belly and inner legs.

To thrive in warm climates, the burro’s ears are almost twice the size of a horse’s to help dissipate heat. In comparison, their body is only about half the size of a wild horse. A wild burro averages 11 hands high (44 inches) and weighs about 500 pounds.

Similar to wild horses, burros form herds with a dominant male called a Jack. On the other hand, the lead mare in the group is called a Jenny. Female burros give birth to one colt each year. While births can take place year-round, most occur in May, June, and July.

Unlike wild horses, burros tend to evaluate a potential danger instead of fleeing. Even though they can run nearly as fast as wild horses, burros tend to stand their ground. This trait is somewhat due to their stubbornness but is more likely a result of their high intelligence. Burros prefer to understand any potential threats and then perform the necessary action. If the burro needs to run, it can cover ground at around 15 mph. If the burro needs to defend itself instead, the animal can stand on its front or rear legs to deliver a devastating kick.

The wild burro’s American ancestors were initially used as work animals on ranching and farming operations. Along with oxen and horses, they also acted as pack animals during the Westward Expansion. Since a burro can carry up to 150 pounds of equipment, ranchers, prospectors, and miners relied on them to transport supplies. In their migration to the American West, travelers needed to relocate large amounts of water, machinery, ore, and any personal belongings.

Over the years, burros escaped or were turned loose and have been meandering through America’s western arid landscapes ever since. Today, approximately 10,000 wild burros roam rangeland across Oregon, California, Nevada, Utah, and Arizona. They can even be found along the Spring Mountain Range in Nevada, about 20 minutes from the Las Vegas Strip.

To survive these harsh conditions, burro populations tend to gather around dry lake beds where there is usually a natural cold or warm spring nearby. The burros will dig groups of wells in dry streambeds to reach drinking water. Some of these holes can go as deep as five feet to make it to groundwater.

Once the burros move on and abandon the wells, they become germination nurseries for cottonwood and willows. The reservoirs are also transformed into water resources for native insects, amphibians, and mammals.

The wild burro can endure losing as much as 30 percent of their body weight in water and replenish that loss after five minutes of drinking from one of these wells. For reference, humans will typically require medical attention if they lose 10 percent of their body weight to dehydration. To recover from this dehydration, a full day of intermittent fluid consumption is needed.

Wild burros feed on grasses, palo verde, and Mormon tea (Ephedra nevadensis). They will forage for food throughout the day, except during the summer months when they will scavenge at night and in the early morning when it is cooler.

The wild burro has no natural predator or competitor. However, recent research has revealed that mountain lions are now adapting and adding burros to their menu. Most foals will reach maturity and can live as long as 25 years in the wild.

Around 150 miles west of Las Vegas, wild burros have the dubious distinction of being the largest wild animal living in Death Valley National Park. Due to a lack of predators and disease, their population grows exponentially, increasing at an annual rate of nearly 20 percent.

This dramatically growing population combined with the burro’s consumption of scarce water supplies and vegetation — crowding out other native species — has compelled the National Park Service to label the wild burro as a nuisance.

On the other hand, the Bureau of Land Management seems to have taken a liking to the rugged creatures. They established the Marietta Wild Burro Range in 1991 as America’s first formally recognized haven for these descendants of Spanish equine immigrants. The 68,000-acre range is located in west-central Nevada along State Route 360 and is home to approximately 80-100 wild burros.

One Response to The Wild Burro