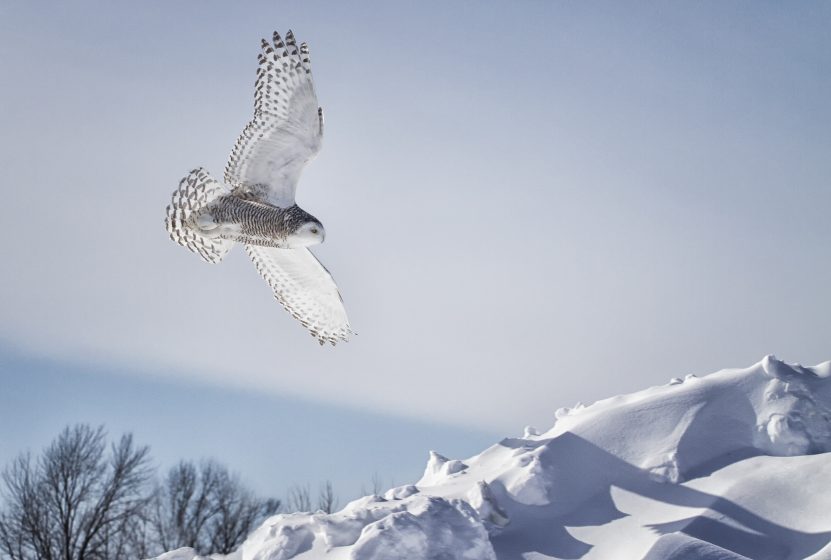 The Snowy owl (Bubo scandiacus) is the largest bird species in the Arctic, with an average wingspan of 67 inches and a weight of about 3.3 pounds. Females are slightly larger and heavier than males.

This owl has the perfect camouflage for its wintery environment. The bird is covered with white feathers imprinted with brown spots, bars, and striations. Females typically have more markings than males.  The Snowy owl also has small ear tufts, a black bill, and bright yellow eyes. Legs and feet are covered in white feathers to protect them from the cold weather.

The snowy owl also has a rounder body and thicker plumage than most other owl species. These adaptations help them preserve 95 to 104 degrees Fahrenheit body heat even when the ambient temperature is -50 degrees.

When snowy owls are not delivering mail and hanging out with Harry Potter at Hogwarts, they can be found in polar regions worldwide in northern Canada, Alaska, Russia, and Europe.

This owl will sometimes travel long distances outside of its normal range when food supplies are low, or the owl’s population density is too high. Both scenarios create fierce competition for food.

When this happens, the snowy owl heads south from its far north habitats. These Arctic birds have been spotted as far south as Oklahoma, Alabama, Texas, and even central California. In 2011, one snowy owl even made its way to Hawaii.

While most owls hunt at night, snowy owls are active in the daytime hunting in open meadows and fields. The bird’s keen eyesight helps them locate their favorite prey like lemmings and voles. Since many of these small mammals tend to tunnel beneath the snow, the snowy owl uses their sharp hearing to pinpoint the rodent’s exact location under the snow.

Snowy owls will also kill foxes, weasels, and other birds if lemmings are not easily found.

Like other owls, the snowy owl’s feathers are soft and covered with tiny serrations at the edges. These serrations break up the airflow into smaller flows that reduce air noise through the feathers. Any remaining aerodynamic noise is absorbed by the fluffy down feathers on the bird’s wings and legs.

Snowy owls are monogamous, although two females may mate with one male if there is an abundant food supply.

Breeding pairs form in late winter when the owls are at least two years old. The male starts the courtship with an aerial performance. This often involves carrying a lemming in his talons or beak and flying in a low, up, and down pattern in front of the female. Once he lands near her, he begins a dance of bobbing, bowing, and ruffling up his feathers.

As soon as the female chooses her mate, she begins building the nest. The snowy owl nests on the ground, with the female scraping a small depression in the tundra. Prime nest locations are slightly elevated to allow the pair a good vantage point to watch for predators.

The number of eggs laid depends on the amount of available food during the breeding season. Female snowy owls will lay anywhere from one to nine eggs, with each egg laid between two to five days apart. She will sit on the clutch between 31-33 days to keep the eggs warm while the embryos develop.

Since the incubation starts as soon as the egg is laid, the owlets will hatch at different times. This means the siblings can vary significantly in size and age.

The newly hatched outlets are born covered with an insulating, white fluffy down. Due to the short Arctic summers, the young owls start leaving the nest after three weeks but cannot fly until they are about eight weeks old.

Both parents will care for the owlets for approximately four months. At that time, the young owls can hunt and survive on their own.

Snowy owls can live to nine years in the wild. The oldest known captive owl lived to a ripe old age of 28.