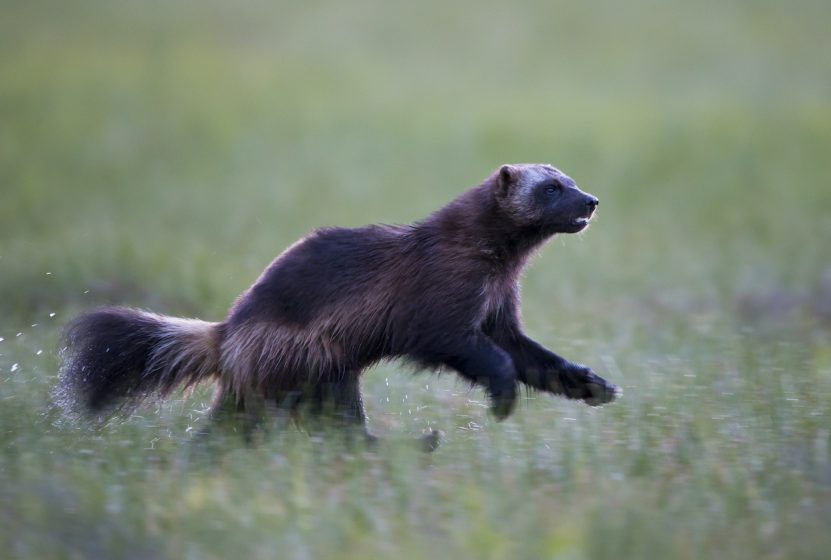 As the largest member of the weasel family, the wolverine(Gulo gulo)is an adept apex predator. Despite its “glutton” nickname, this solitary and reclusive animal is a wiley strategist and fierce hunter.

Resembling a small, squat bear, the wolverine is closely related to other Mustelids, including weasels, otters, ferrets, minks, and badgers.

Wolverines have short, bowed legs with hairy soles, and their five-toed paws are armed with crampon-shaped semi-retractable claws. These allow them to effortlessly traverse icy terrain or mountains as well as climb trees and cliffs.

The wolverine’s long blackish-brown coat has a light brown stripe along each side of the neck that extends to the tail’s base. The oil in its fur allows for snow and frost to easily brush off. This, in addition to the fur’s density and durability, has made it a highly coveted pelt for trappers and hunters.

Wolverines range in size from 25 to 36 inches long with an additional 10-inch bushy tail and weigh between 20 to 65 pounds. Males can weigh up to 30 percent more than females. At the shoulder, wolverines are about 15-18 inches tall.

Wolverines are solitary animals found in northern latitude forests, tundra, and mountain ranges with abundant snowpacks. Females have a home range between 50 to 100 square miles, while males may have a territory of nearly 250 square miles with several female ranges encompassed within.

In North American, wolverines primarily live in Alaska and Canada, with small, isolated populations in the mountain ranges of Washington, Idaho, and Wyoming. Although Michigan State is coined “The Wolverine State,” a wolverine has not been spotted there since the 1860s.

This combination of low population density in remote locations makes determining the wolverine’s population difficult. Researchers estimate that there are between 25 to 300 wolverines in the lower 48 states.

While the mating season is in the summer, the embryo remains dormant until early winter. Once the fetus becomes active and begins to develop, gestation is approximately 30 to 45 days.

In the spring, females typically give birth in snow dens that provide shelter from predators and harsh temperatures. Litters will contain two or three “kits” that fathers will visit until they are weaned around 10 weeks of age.

Although female young may continue to live in their home range for up to three years, males will leave to find their own territory around one year of age. Wolverines have an average lifespan between 8-10 years.

Wolverines are excellent hunters. Their outstanding sense of smell allows them to locate prey buried under 20 feet of snow. While they primarily feed on rodents, rabbits, bird eggs, and other small game animals, they have also been known to attack caribou, elk, and sheep. Being both always hungry and extremely strong for their size, it isn’t uncommon to see a Wolverines dragging a carcass much larger than themselves home for leftovers.

Wolverines are also consummate opportunists. In the summer, they can be found eating fruits and berries as well as roadkill and carrion. They also have a reputation for following and cleaning out traplines and raiding cabins to devour food stocks.

Like other Mustelid family members, wolverines have a specialized upper molar that is rotated 90 degrees toward the inside of their mouth. This tooth design enables these animals to tear off frozen meat from carcasses.

The Wolverine has also been a central mythological figure among the Algonquian tribes and the Innu people in Labrador and Quebec. In both cultures, the wolverine is considered to be a trickster and thief.

Called Kuekuatsheu in Innu folklore, the wolverine once built a large boat for all the animal species to seek shelter in when the land was flooded. After several days of floating on the boat, Kuekuatsheu instructed a mink to jump into the water and bring back mud and rocks. The mythological wolverine then used these materials to build the island that all living creatures now inhabit.

Luckily, today’s wolverine no longer faces epic natural disasters in a fight for survival. Aside from isolated reports of wolf, cougar, and occasional brown bear attacks, the wolverine’s primary nemeses are humans. For centuries, the Wolverine’s fur was treasured as a trimming for winter coats. The animal was pressured through hunting and trapping and is still considered a game species in Russia, Canada, and Alaska.

Human encroachment has also played a critical role in shrinking the wolverine population in the lower 48 states of the United States. Over the last 150 years, human development has pushed the wolverine’s natural distribution farther and farther north into more remote and colder regions. Despite these unfavorable circumstances, there has been little success in getting the wolverine listed as an endangered species when all the Wolverine really want is to be left alone so they can be awesome all day.