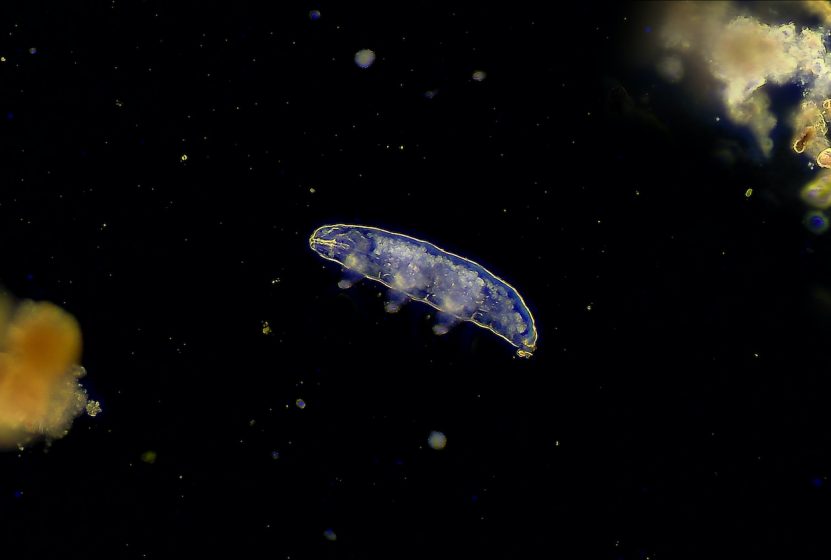 The Water Bear (phylum Tardigrada), also affectionately known as a moss piglet, is a tiny animal that looks like it belongs in a science fiction movie.

Actually, the Water Bear should be the star of any space movie.

These near-microscopic-sized creatures are nearly indestructible and can survive the extreme cold and oxygen-less vacuum of outer space.

Water Bear is the nickname given to any one of more than 1,300 species of small invertebrates in the phylum Tardigrada. About 0.04 inches long, they live in a wide range of environments such as moss, flowers, sand, freshwater, saltwater, and even the deep sea and mud volcanoes.

While tardigrades can live about anywhere, they prefer life swimming through the sediment at the bottom of a lake.

Closely related to insects and crustaceans, the water bear has a short body comprising four fused segments. Each segment has a pair of short unjointed limbs terminating in four to eight sharp claws.

Tardigrades have no specialized organs for circulation or respiration. Instead, their body cavity is filled with a fluid that transports blood and oxygen to its cells.

A Water Bear’s diet is made up of the juices it siphons from plants, animals, bacteria, and even other tardigrades. It uses the spear-like structures (stylets) near its mouth to pierce the plant or animal’s individual cells. Once attached, the water bear sucks out the cellular contents.

But what makes Water Bears so fascinating is their remarkable superpower for surviving hostile environments.

During extremely arid conditions, the water bear transforms its body into a living mummy. Its body dries up, and the water bear looks like a lifeless ball. This is a state of suspended animation known as the “tun” state. The tardigrade’s metabolism slows to 0.01 percent of its normal rate, and it can survive in this condition for decades until water returns.

Staying alive while desiccated is one thing. Surviving in space-like conditions is another.

Scientists put water bears into a low Earth orbit where they were exposed to a space vacuum and radiation. They survived for 10 days.

Another experiment kept tardigrades in a vacuum for eight days. The animals were then transferred to a chamber filled with helium gas at room temperature for three days. After that, they were exposed for several hours to a temperature of -458 degrees Fahrenheit. When the tardigrades were brought back to room temperature, they all came back to life.

In experiments, tardigrades have survived boiling liquids, radiation, and pressure up to six times the pressure measured at the bottom of the Mariana Trench. To put that last figure in perspective, water pressure at the trench’s bottom is a whopping eight tons per square inch.

Outside of the scientist’s lab, individual Water Bears have a lifespan between three to four months. But their species may just outlive humans.

In fact, their fossil record goes back to the Cretaceous period (145 to 66 million years ago). That means tardigrades have survived all five mass extinctions.

Odds are the mighty little Water Bear will survive a few more.