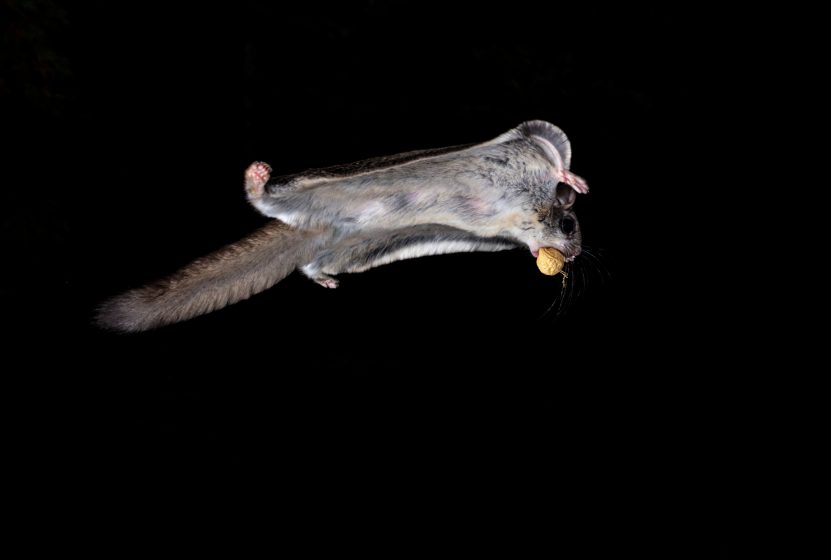 The flying squirrel (Glaucomys) is the daring wingsuit jumper of the mammalian world. Armed with built-in night vision capabilities, this tiny aerialist glides through the night skies, hurling itself from tree to distant tree.

Belonging to a family of more than 50 species of gliding squirrels, flying squirrels can be found in temperate and tropical forests around the globe.

They fall with style.

To avoid predators on the ground and move from tree to tree, the flying squirrel leaps from high branches and uses its skin as a canopy to control its descent. This loose fold of skin, called a patagium, extends from the front to hind feet. When the squirrel stretches out all four limbs, the patagium pulls tight to form a canopy that allows the squirrel to glide as far as 150 feet.

The squirrel uses slight leg movement to steer. Lowering one limb shifts the airflow while a specialized piece of minuscule cartilage not found in other gliding mammals supports the patagium’s tautness. A tail with feather-like fur allows the squirrel to make sharp course corrections, including 180-degree mid-flight turns to avoid flying predators.

Unlike other squirrels, flying squirrels are nocturnal and have large eyes to enhance their night vision.

With its glossy, greenish-brown fur and white undersides, today’s flying squirrel is thought to have evolved from tree squirrels dating as far back as 31 to 25 million years ago.

The southern flying squirrel is about the size of a chipmunk, measuring nine inches long and weighing two ounces—about as much as 20 ping pong balls. In comparison, the northern variety is slightly larger at a length of 11 inches and a weight of three ounces. In each species, the tail is approximately 5-6 inches long.

Flying squirrels live in tree cavities and rock crevices. Some also build round nests high in trees where branches attach to the trunk. While flying squirrels do not hibernate in the winter, they will slow their activity and sometimes nest in groups of up to 20 squirrels to stay warm.

Flying squirrels spend most of their lives in trees but will descend to the ground to forage and catch food. Their diet includes a wide variety of fruits, nuts, fungi, insects, eggs, and even small birds.

In 2019, researchers discovered that all three North American flying squirrels turn a bright pink when under ultraviolet light. While ultraviolet fluorescence is common in marine creatures, insects, and some birds, it has rarely been observed in mammals.

Scientists have yet to reach a consensus on why these squirrels display a pink color. Still, many believe it has to do with confusing predators like owls. Ultraviolet rays are abundant during dawn and dusk, so animals exhibiting fluorescence should be visible to other organisms. Birds of prey fluoresce in the same pink hue, so the flying squirrels might appear to be another owl.

While flying squirrels are a favorite food source for the spotted owl, they are also preyed on by hawks, foxes, coyotes, and weasels.

Flying squirrels can live up to five years in the wild and up to a decade in captivity.

One Response to The Flying Squirrel