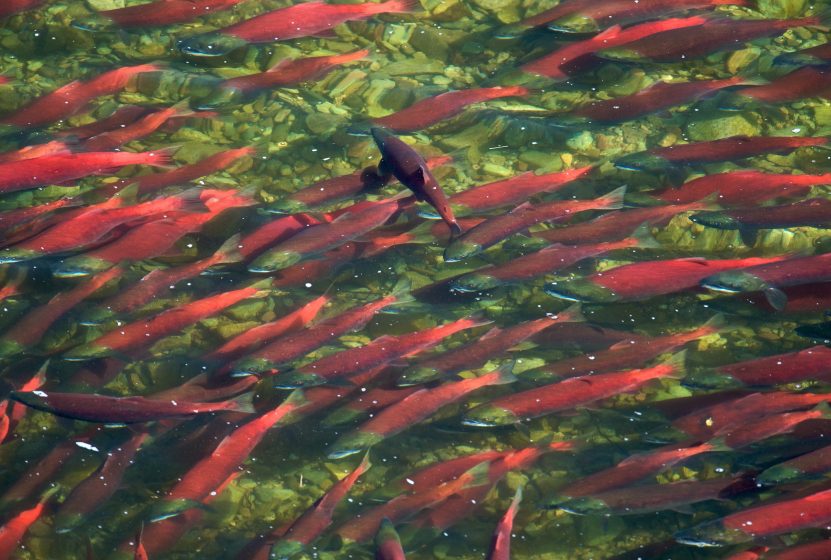 The sockeye salmon is one of nature’s greatest wonders, traveling 1,000 miles in a year between freshwater and saltwater, surviving countless predators, and having a one in 1,000 chance of reaching adulthood.

The sockeye salmon (Oncorhynchus nerka) is one of the smaller species of salmon found along North America’s west coast and the third most common after the chum and pink salmon.

Easily recognized by its green face and bright red body, the sockeye has an average length of 25 inches and tips the scales between 5-15 pounds. The trademark red hue only appears during the spawning season. For most of their adult lives, the sockeye has a metallic blue-green top tinged with silver.

The sockeye sexually matures between 3-5 years old as it begins the journey back to freshwater. The sockeye remembers the chemical trail, or scent, of its birthplace. It can successfully navigate hundreds of miles back to that location, often spawning within 20 feet of where it was born.

Water temperature and predation influence the sockeye’s mass migration. Warmer waters shorten their eggs’ incubation time while colder waters lengthen it. This is why the salmon spawns in late summer as water temperatures begin to drop.

The sockeye also run upstream in massive numbers to overwhelm predators. Tens of thousands of fish may enter one river system within hours or days. Traveling in large numbers through the gauntlet of eagles, bears, and sea wolves lowers the odds of any one salmon getting eaten before it spawns.

The sockeye returns to freshwater in early summer, spawning in late summer or early fall. Once the female returns to her birth location, she uses her tail to dig a nest (“redd”) in the gravel. She will lay between 2,500-5,000 eggs in her redd.

Male sockeyes will present themselves to a female several times before she picks a suitable mate based on his color and size. Once the males fertilize the eggs, the female covers them with gravel.

Since both males and females have expended so much energy returning home to spawn, they soon die once the eggs are covered. The salmon carcasses add a valuable source of nutrients to the river ecosystem, improving the growth rates of the next generation of salmon.

The sockeye eggs hatch in the winter, and embryos live off their attached yolk sacs. The following spring, the “fry” leave the relative safety of their gravel beds and move to larger bodies of freshwater to feed on zooplankton and small crustaceans. Between 1-3 years of age, the juvenile sockeyes begin their downstream migration to the Pacific Ocean in search of larger and more plentiful food needed to support upcoming tremendous growth.

However, sockeye salmon don’t come equipped with a magic switch that makes the fish instantly transition from living in freshwater to thriving in salt water.

Like every other vertebrate, the sockeye has the challenge of keeping a balanced concentration of water and salt (specifically sodium chloride) in its body. If the sockeye could not keep the high saline water from pulling water from the fish’s body, its cells would shrink and die, killing the fish within minutes.

Fortunately, the sockeye salmon has developed a unique physiological adaptation that allows it to thrive in fresh and saltwater environments.

First, the sockeye drinks very little water while living in freshwater to avoid diluting its body’s natural salt levels. Once the fish moves to saltwater, it consumes several gallons of seawater daily to offset the ocean’s dehydrating effects.

Second, the sockeye’s kidneys change the concentration of the fish’s urine. In freshwater, the kidney produces large volumes of dilute urine to flush the water infused into the fish’s body from the water it swims in. Once the sockeye is in the salty ocean, the kidneys produce less but more concentrated urine to remove as much salt as possible from the body.

These physiological changes begin during the first part of the migration when the juvenile sockeye stops at the mouth of its home stream. These coastal estuaries are a mix of freshwater and saltwater. It spends several days in these transitional waters, drinking the brackish water. This makes its kidneys begin to shift urine concentrations, and its gills reverse the direction they pump sodium chloride.

Once the sockeye has made the freshwater to saltwater physiological transformation, it swims into the Pacific to begin the next stage of its long migration.

Once the sockeye reaches saltwater, their diet primarily consists of zooplankton and krill that are trapped and filtered by bony projections on the fish’s gills. The sockeye will also consume small fish and the occasional squid.

The sockeye gains 99 percent of its body mass while feeding in the ocean. The food they eat is high in carotenoid, the same pigment that gives carrots their orange color. Those pigments are stored in the fish’s flesh. As the salmon reaches its spawning grounds, its body begins to absorb its scales, and the stored carotenoids are transferred to the skin and the eggs. By the time the spawning is complete, the sockeye’s flesh is primarily white because all the pigment has been moved out of the flesh.

Today, the largest sockeye salmon populations live in the rivers attached to Bristol Bay in Alaska and the Fraser River systems in Canada, where millions of fish migrate yearly.

Among indigenous people, the sockeye was used for both food and currency. The fish was caught using spears, gill nets, and traps made from spruce and red willow branches.

Indigenous people consumed sockeye in various forms, from raw to baked, boiled, or smoked. Many families sometimes kept the smoked salmon for up to three years and cooked the dried fish with berries. A favorite delicacy was salmon eggs poached with black seaweed and seal oil.

While sockeye populations are healthy in Alaska and Canada, the fish are severely declining in the lower 48 states. The primary threats come from agriculture and flood control. Dams in sockeye habitats block upriver access to the fish’s return to their spawning grounds.