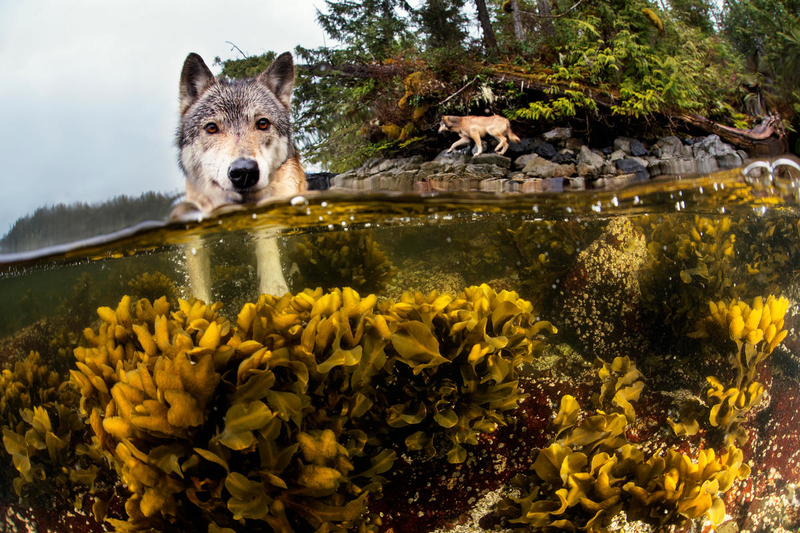 The Sea Wolf, or Rain Wolf, is a rare type of coastal wolf found along western British Columbia’s remote network of islands and peninsulas. This wolf lives and thrives in the fringe area between the temperate rainforest and the Pacific Ocean coastline where up to 90 percent of its food comes from the sea.

With no deer or elk to hunt, the Sea Wolf has adapted its diet and behaviors to a marine environment. This wolf scavenges the low tide shoreline for barnacles, mussels, and herring roe that’s left on kelp. It has also learned how to find crabs by turning over rocks and how to dig for clams. A creature of opportunity, the Sea Wolf doesn’t pass up a free meal and will dine on the beached carcasses of seals and whales.

The Sea Wolf is also a proficient marine hunter. While it cannot catch seals in open water, it will snag them while they are on shore.

During the salmon and herring spawning seasons, nearly one-quarter of this coastal wolf’s diet is fish. Salmon are hunted in shallow creeks with the Sea Wolf primarily eating the fish’s head, although it will sometimes eat the entire protein- and fat-rich body.

Although little is known of this elusive creature, British Columbia’s coastal wolves are genetically distinct from inland wolves (Canis lupus columbianus) and a push is being made to have them recognized as a separate subspecies. Besides their different lifestyle and hunting behaviors, the coastal wolves are also smaller in size than their inland cousins and have a reddish tinge to their fur.

The Sea Wolf is an excellent swimmer, often swimming miles in the cold Pacific waters as it hops from island to island in search of food. The longest recorded sea wolf swim is 7.5 miles.

Before human predation and habitat loss, the Sea Wolf once ranged all along the Pacific Coast, from Alaska to northern California. While there are still pockets of coastal wolves in southeast Alaska, the sparsely populated areas of  British Columbia, primarily throughout the 25,000 square-mile known as the Great Bear Rainforest, provide a safer, and food-rich, habitat.

A dominant male and female will lead the pack of four to eight Sea Wolves and have one litter of four to six pups per year. The pups are born from March to May with the entire pack helping to raise the young. The non-dominant females produce milk to feed the pups. Non-dominant males compete to take turns with babysitting duties.

The pups are born deaf and blind and not able to walk until they are about two weeks old. The whole pack takes care and raises the litter.

The young wolves will begin to hunt with the pack when they are approximately seven to eight months old.

Members of the indigenous Kwakiutl tribe, who inhabited coastal Vancouver for the past  9,000 years, prominently feature wolves in their origin stories. They believed their first ancestors were wolves that transformed into men.

Despite their rarity Sea Wolves are not protected by Canada’s federal or provincial laws. British Columbia’s current wolf management plan encourages wolf hunting and has no seasonal limits.

2 Responses to The Sea Wolf