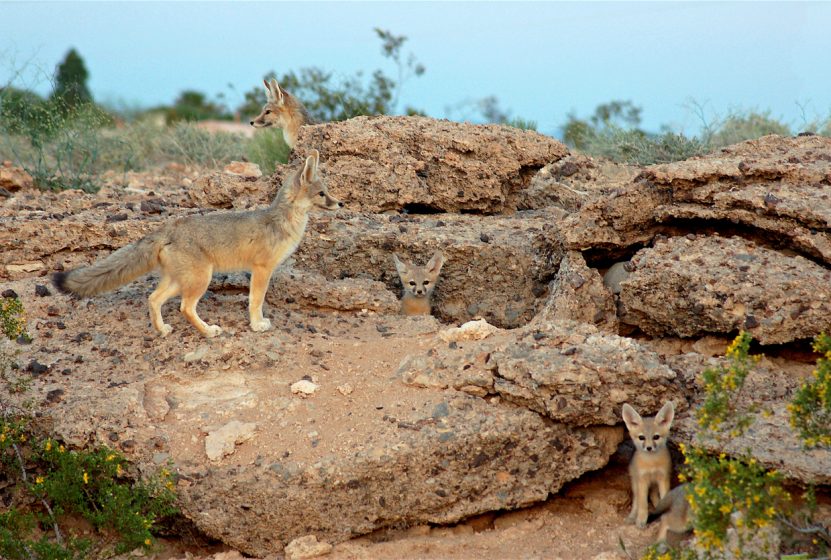 The kit fox (Vulpes macrotis) is the smallest member of the fox species in North America and one of the dog family’s smallest and rarest members. This cat-sized fox is only found in the southwestern deserts of the United States and northern Mexico.

The kit fox looks like the offspring of a miniature coyote and a jackrabbit. Actually, the kit fox is the size of an adult jackrabbit.

This diminutive canine sports a light gray and yellowish-tan coat and weighs between 3-6 pounds. It has a body length of around 20 inches plus a 12-inch black-tipped bushy tail, which accounts for about 40 percent of the fox’s total body length.

Found in desert and semi-desert landscapes, the kit fox has large, close-set ears that give it a remarkable sense of hearing. The large ears also help dissipate heat during summers when temperatures can exceed 110 degrees Fahrenheit. The kit fox also has fur surrounding its paw pads, forming a “sand shoe” for traction and insulation from the scorching desert surface.

As another desert adaptation, if no open water is available, the kit fox can stay hydrated by absorbing fluids from the animals and plants it consumes.

The kit fox lives in small groups. The foxes dig communal dens with multiple key-hole-shaped entrances where they reside during the day to avoid heat and predation from coyotes and golden eagles. The kit foxes also take over burrows constructed by other animals. They can have up to 30 multi-chambered dens in one group.

The kit fox leaves its den at night to hunt and can roam an average of nine miles in a single hunt. The fox’s primary prey includes jackrabbits, cottontail rabbits, prairie dogs, rock squirrels, and kangaroo rats. These small foxes will also eat insects, carrion, birds, and human trash if available.

The kit fox mates for life, with the mating season occurring between December and February. Gestation is about two months, with most litters containing four pups born in February or March.

Parents bring food to the den until the pups are about five weeks old. At that point, the pups begin to leave the den and join their parents on short foraging trips to learn how to hunt. The pups will stay with their parents until they are about four months old.

The kit fox has a lifespan of 5-7 years in the wild, with a nearly 75 percent mortality rate for pups within their first year.

Threats to the kit fox include predation and loss of habitat due to urbanization, grazing, and agriculture. Off-road vehicles also account for an increase in kit fox mortality by hitting foxes, driving over, and crushing dens.

In 2011, the first-ever documented outbreak of canine distemper hit kit foxes in Riverside County, California, causing the local population to die off.

The San Joaquin kit fox (Vulpes macrotis mutica) is a recognized sub-species only found in central California. Sadly, there are currently fewer than 7,000 of these foxes remaining, and sadly their population continues to decline.