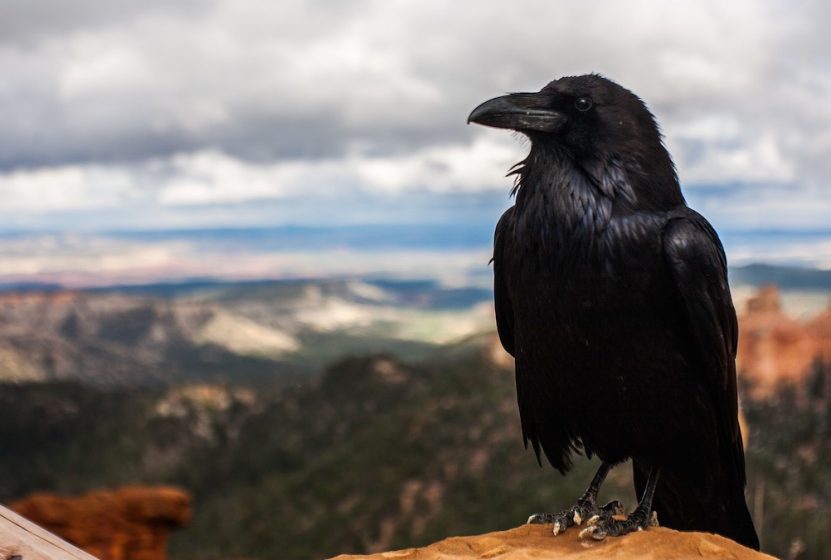 “And the Raven, never flitting, still is sitting, still is sitting
On the pallid bust of Pallas just above my chamber door;
And his eyes have all the seeming of a demon’s that is dreaming,
And the lamp-light o’er him streaming throws his shadow on the floor;
And my soul from out that shadow that lies floating on the floor
Shall be lifted—nevermore!” – The Raven, Edgar Allan Poe

The common raven (Corvus corax) is the most widely distributed member of the crow family (Corvidae) in the northern hemisphere. Known for its intelligence and inquisitiveness, the raven lives as both a scavenger and predator.

Approximately 7.7 million ravens can be found throughout the western regions of North America, from the hot arid desert to the cold Arctic tundra.

About the size of a hawk, the raven sports black feathers, legs, and beak. The average bird weighs 2.3 pounds with a wingspan of over four feet.

Contrary to common sense, the raven’s black plumage actually helps cool the bird in hot climates. While the black feathers do absorb more solar heat, that heat is near the feather’s surface. A slight breeze transfers the heat away from the feathers. Light-colored feathers, on the other hand, tend to trap what heat they do absorb close to the skin where it’s harder for air to move.

Native Americans viewed the raven as a prankster and as a symbol for change. The Haida tribe, located along the west coast of Canada, believed the raven was the physical form of an ultimate being called Ne-kilst-lass. Ne-kilst-lass is credited with discovering the first humans in a clamshell.

Noted for its signature guttural croaking, the raven can also make a wide variety of sounds. In captivity, they have been able to mimic car engines, flushing toilets, and even human speech. In the wild, they can also imitate wolves to attract them to large carcasses that the raven isn’t capable of breaking down by itself. Once the wolf has finished feeding, the raven swoops in to clean up.

The common raven’s intelligence is considered close to that of dolphins and chimpanzees. In a logic test, ravens had to grab a piece of hanging food by pulling on a string, one piece at a time. The bird would hold the string in place with its foot while it reeled in the next bit of line, repeating the process until the food could be reached. Four out of five ravens that were tested were successful on the first try. They also use this technique to steal fish from unattended lines left by ice fishermen.

In the wild, ravens execute elaborate tricks to protect their food. One raven was observed playing dead next to a beaver carcass to deter other ravens from poaching its meal. Others will pretend to put their food in another place if they know they are being observed.

Ravens are also the only known non-primate that uses gestures to communicate. Ravens use their beaks like human fingers to point to an object’s location to other ravens. They will also hold an object in their beak to get another bird’s attention.

Living up to their prankster reputation, ravens have repeatedly been seen sliding down snow-covered roofs and hills. They even make toys from sticks, pinecones, and rocks to play by themselves or with others.

Ravens usually forage in pairs feeding on insects, rodents, and lizards. Ravens are also particularly fond of raiding the nest of other birds to consume their eggs and young. Ravens also enjoy garbage and carrion.

During the raven’s courtship display, the male will perform a series of aerial acrobatics of dives, rolls, and tumbles to impress the female. Once paired, the birds typically mate for life and live within a fixed territory. The pair often display signs of affection such as touching bills and preening the other’s feathers.

Ravens work together to build a nest out of large sticks that is placed high in conifers or on the ledge of a cliff. The nest’s center is often lined with bark, animal hair, grass, and moss.

In the spring, the female lays between 3-7 greenish eggs that will incubate for 18-21 days. During the period, the male brings food to feed the female. Once the eggs are hatched, both parents feed the nestlings until they leave the nest about six weeks later.

With few natural predators, the average lifespan is 13 years for a raven in the wild and up to 40 years in captivity which is plenty of time to swap stories and learn some tricks from a very clever bird!

2 Responses to The Raven