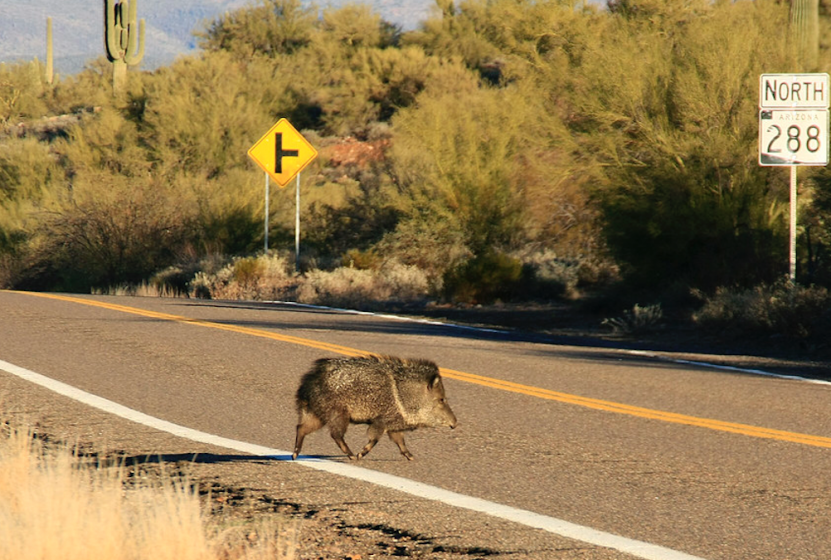 The javelina (Tayassu tajacu), also known as a collared peccary, is a pig-like mammal found throughout the arid climates of the southwestern United States. Covered with coarse black hair peppered with gray and brown, the javelina sports a lighter colored band or collar, circling the shoulders.

Adult javelina will weigh between 35 to 55 pounds and stand about two feet tall and up to four feet long.

While it looks like a pig with its snout, short legs, and stout body, the javelina is not a member of the true pig family.

Peccaries belong to the family Tayassuidae, or New World pigs. They differ from Old World pigs in that they have small ears and no visible tails. The peccary’s canine tooth is short and straight while a pig’s is long and curves back on itself. Peccaries also have three toes on their rear feet compared to a pig’s four.

Over the centuries, javelina migrated north from South and Central America to southern Texas, New Mexico, and Arizona. Their northward expansion appears to be limited by their lack of an undercoat to protect them from extremely cold winters.

There are approximately 250,000 javelinas in the U.S. today.

The name javelina comes from the Spanish word for javelin, which describes the animal’s spear-like upper canines. Designed for self-protection and slicing into plant roots, the upper and lower canines are continuously sharpened as they move against each other. Javelinas also rub their canines together to create a chattering sound to warn predators to stay away.

The javelina has another nickname, “skunk pig.” This is due to a scent gland located on its lower back, which is used to mark the animal’s scent on rocks and trees to mark territory. Since javelinas can only see out to about 30 feet, they also rub cheek to hip to mark one another with scent to identify members of their group or squadron.

A squadron averages 10 javelinas, although some groups can be as large as 50 animals. The squadron defends a territory that encompasses its sleeping and feeding areas.

Foraging during the day, javelinas spread out in loosely knit groups in search of mesquite beans, insects, roots, grasses, and sometimes small animals and lizards. A favorite food source is the prickly pear cactus’s pads and fruit.

In the summer, the javelina will shelter in the shade of caves, canyons, and dense shrubs to avoid the mid-afternoon sun. Feeding resumes in the late afternoon until dusk.

The javelina mating season is year-round with a five-month gestation period and an average litter size of two. The mother will birth away from the herd to prevent the newborn from being eaten by other group members. The young, called “reds” due to the red coloring of their hair, will nurse for their first two months before eating solid foods at around six weeks of age.

In the wild, javelina will live to be about 10 years old. The primary contributors to shortening that life span are mountain lions, coyotes, bobcats, and humans.

One Response to The Javelina