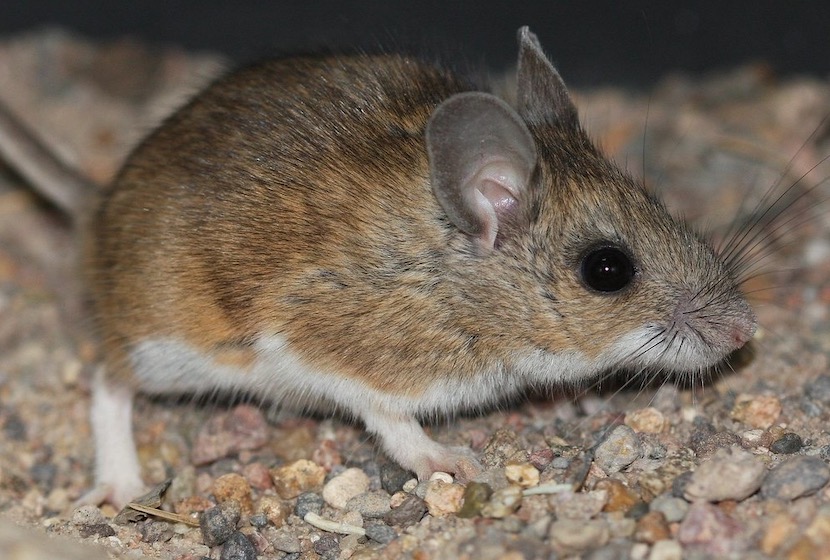 The brush mouse (Peromyscus boylii) is a long-tailed rodent found in the western United States, Canada, and Mexico. Since the mouse is nocturnal, most humans will never cross paths with this tiny mammal except when cleaning their droppings from tents, cabins, or campers.

Although adorable in their unique rodent way, their scat is not. The brush mouse has been identified as a potential health risk to humans since it is a host for the hantavirus. This aerosolized virus spreads to people when they’re cleaning brush mouse feces or removing their nests. An infection from the hantavirus can cause Hantavirus Pulmonary Syndrome (HPS), which has a 38 percent mortality rate.

The brush mouse lives in elevations above 6,500 feet in the mountainous regions of western Nevada, northern California, as well as western Texas and Oklahoma.

This small rodent inhabits pine-oak forests and pinyon-juniper woodlands. It typically has a population density of 9-14 mice per acre. Within these areas, the brush mouse prefers to hang out in low grasses for concealment and around shrubs, rocks, and logs for cover from predators and weather.

Both male and female brush mice sport a medium brown fur coat on the top with a lighter brown on the sides.  A broad orange lateral line runs from the cheek to the hindquarters. Like many other prey animals, the brush mouse has a white belly and feet to disrupt its outline.

A unique feature of the brush mouse is its tail, which is longer than its body. The tail ranges from 3.5  to 4.5 inches long, with the total body length averaging 7.6 inches.

The brush mouse weighs between 0.78 to 1.27 ounces, which is equal to about five to seven stacked quarters.

They will often cache pinyon pine seeds, which may play a key role in seed dispersal and range expansion for the tree.

The brush mouse also plays another critical role key in its ecosystem. The mouse is a primary food source for foxes, owls, hawks, and rattlesnakes.

To avoid predation, the brush mouse relies on its keen eyesight to spot predators first. Mice also use chemical cues such as detecting alarm pheromones from other mice.

A skilled climber, the brush mouse, will construct nests made of dry grasses in tree cavities and rock crevices. Nests may also be built under logs, rocks, and caves.

The brush mouse breeds throughout the year, although most births occur in the spring and early summer. The male mates with several females and do not share nests. The female can produce several litters throughout the year since each gestation period is only 23 days. Each litter contains two to five offspring.

A brush mouse has a life expectancy of 6-12 months in the wild due to being on the menu for so many hungry predators living up the food chain.

One Response to The Brush Mouse