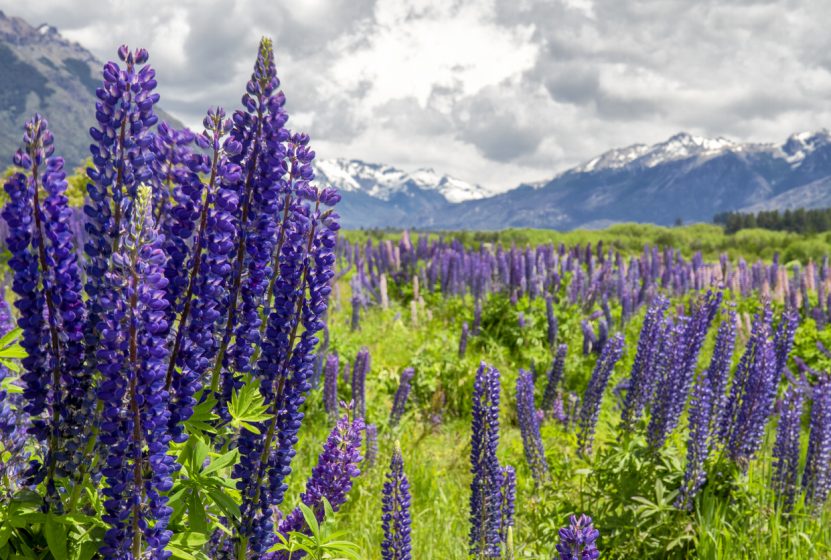 The purple lupine (Lupinus polyphyllus) is a visually striking member of the pea family that is a favorite food source for hummingbirds and butterflies. Ironically, this plant is also a threat to the survival of two butterfly species, including one on the endangered species list.

Native to western North America, the purple lupine prefers moist habitats and is commonly found growing along streams and creeks.

A perennial herbaceous plant, the lupine grows stems reaching nearly five feet tall. The stem has several stalks (petioles) with a cluster of 9-17 leaflets, ranging from one to six inches in length, at each tip.

The lupine’s erect spikes on top of the plant showcase densely packed purple and white-striped half-inch flowers. The flowers bloom for several weeks, from April through July.

The substantial number of flowers on each plant makes the purple lupine a favorite food source for hummingbirds, bees, and butterflies.

The plant’s flowers have also made it popular with gardeners who have cultivated several color varieties ranging from white to pink.

As a result, Lupinus polyphyllus has quickly spread beyond garden beds to become an invasive species across the world.

The purple lupine crowds native plant species out of their preferred habitats. The seeds are toxic to farm animals and native herbivores.

Among the native plants purple lupine displaces is the milkweed (Asclepias), a vital host plant for the Monarch butterfly (Danaus plexippus). The monarch lays its eggs on milkweed, and the caterpillars feed on the plant throughout their larval stage. Eating milkweed arms monarch caterpillars with a cardiac poison that is dangerous to most animals but doesn’t harm the monarch.

With the purple lupine displacing milkweed in northeast America, monarch populations are suffering.

Karner blues live in oak savannas and pine barren ecosystems. The open sunny characteristics of these systems create the perfect habitat for a relative of the purple lupine known as the wild, or sundial, lupine (Lupinus perennis).

Like the monarch’s relationship with milkweed, Karner blues only lay their eggs on sundial lupine. It is the only plant their caterpillars feed on.

Without the sundial lupine, Karner blues cease to exist.

Unfortunately, the purple lupine has invaded the sundial lupine’s territory and has cross-pollinated to create a new hybrid. This new lupine is inedible to the Karner blue.

Although the purple lupine is a food source for other pollinators and its deep root system helps prevent soil erosion, Lupinus polyphyllus is considered an invasive species. As a result, the National Park Service now has a practice of removing the purple lupine when it encroaches on native habitat.