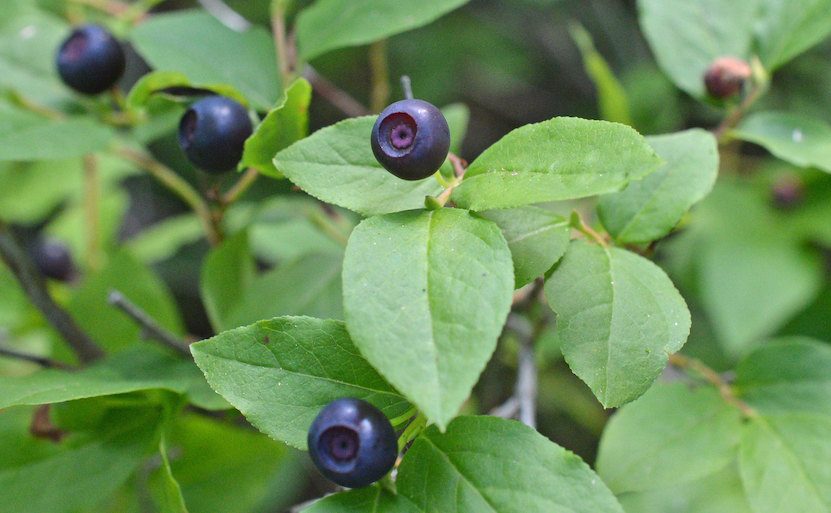 Related to both the blueberry and the cranberry, the huckleberry represents the best of both fruits when it comes to the near-perfect blend of tartness and sweetness.  With more than 12 species of huckleberries located in the Pacific Northwest, this little berry has been a long-time favorite on the menus of humans and animals alike.

The huckleberry has a shallow, radiating root system and is topped by a bush growing from an underground stem. Under ideal conditions, the huckleberry plant will reach heights of 5-6 feet with the berries ripening in mid-to-late summer.

Oddly enough, huckleberries are great benefactors of forest fires. With the surrounding canopy burned down, more light can reach the forest floor which allows the smaller huckleberry to thrive. The fire also releases more nutrients to the ashy, acidic soil, upon which the huckleberry thrives.

After the Mount St. Helens volcanic eruption in 1980 huckleberries were one of the few plant species to survive and have continued to flourish on the volcano’s slopes ever since.

When ripe, huckleberries are about one-quarter of an inch in diameter and closely resemble blueberries. High in vitamin C, iron and potassium, the huckleberry has a similar taste to that of the blueberry but has a more intense and tart flavor. Its skin is thicker than a blueberry’s and its seeds are larger and more bitter.

Huckleberries are a top food source for black and grizzly bears, as well as deer, rodents, birds, and insects. During late summer and early fall, huckleberries can comprise nearly ⅓ of a bear’s diet as it prepares for hibernation.

Northwestern tribes also relied heavily on the huckleberry for sustenance. They built huckleberry harvesting combs made from wood or salmon backbones to strip the berries off of the bushes. The berries were eaten fresh or dried in the sun. Huckleberries were also smoked and mashed into cakes and then wrapped in leaves for storage.

In 1805, famed explorer, Captain Meriwether Lewis, described how members of the Shoshone Tribe near the Rocky Mountains favored dried cakes of huckleberries. Lewis did not find the cakes filling and directed one of his expedition members to mix equal parts of flour and huckleberries into a pudding. This mixture was served as breakfast and shared with the Shoshone chief who “declared it the best thing he had tasted in a long time.”

Part of the huckleberry’s allure is you can’t find them at your local market. The plant has successfully defied attempts at commercial farming so most huckleberry connoisseurs have to get outside in the Pacific Northwest and go foraging in the forests.