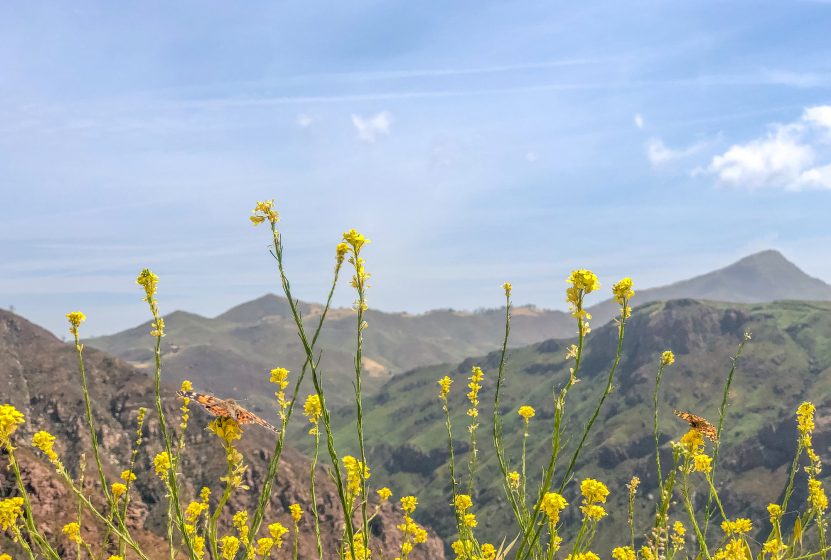 Black mustard (Brassica nigra) is a flavorful spice that has been treasured by many cultures around the world for centuries. However, along America’s Pacific Coast, the colorful plant is now considered an invasive weed that is literally burning up the landscape.

Native to North Africa, Central Europe, and parts of Asia, black mustard can also be found throughout Canada and the United States. The picturesque plant is classified as a noxious weed in 44 of the 48 lower states.

This pretty boy invasive weed has become a springtime tourist attraction at California vineyards. Fields covered with acres of striking yellow mustard flowers have added to the local charm of the coastal wineries where the plant is used as a cover crop and to provide control of soil nematodes.

Reaching nearly six feet in height, black mustard has large stalked gray-green leaves covered with bristles at the base.

Mustard blooms from March through June, with flowers having four yellow petals. As the flower develops, it forms long seed pods, with each pod containing four round seeds. A single mustard plant can produce thousands of seeds that can survive up to 50 years underground.

The frequency and hardiness of the seeds are just one of several reasons why black mustard has rapidly expanded its footprint in the U.S.

First, mustard has no mycorrhizal dependence. This means the plant can access water and nutrients from the soil without the help of soil fungi. Native plants rely on that mycorrhizal symbiotic relationship to thrive.

When the soil is disturbed through wildfire or human construction, soil fungi are destroyed. This creates the perfect environment and competitive advantage for non-native plants like black mustard.

In addition, mustard germinates in early winter before native plants do. Mustard quickly shoots up to more than six feet tall and can block out sunlight for plants underneath it.

By the end of July, most black mustard plants have died and dried up to become the kindling that fuels California’s long wildfire season. Since the plant’s stalks grow so high, they can act as a fire ladder and carry flames up toward taller trees.

Once the fires have burned through an area, black mustard is one of the first plants to bounce back. This shortens the fire cycle and leads to the transformation of chaparral and coastal sage scrub habitats into annual grasslands.

Researchers believe black mustard was introduced to the Pacific Coast as a spice crop by early Spanish colonizers. The seeds are about 1 mm in diameter, hard, and range from dark brown to black in color. While the seeds have no aroma, they are treasured for their flavor.

Before it arrived in North America, black mustard had been cultivated for thousands of years. Egyptian Pharaohs were entombed with mustard seeds as an afterlife condiment. The Romans were considered the first to grind the seeds into a paste and mix them with wine or vinegar.

French monks elevated the plant to a new culinary level in the 13th century when they mixed the ground seeds with unfermented grape juice. This concoction was initially called “moût-ardent,” which evolved to “moutarde” and ultimately became known as mustard in English.

Young mustard greens can be consumed as a vegetable. The leaves contain antioxidants like beta carotene. They are also a source of several B vitamins, including thiamine (B1,) niacin (B3,) and pyridoxine (B6.)

Black mustard has also been used as a homeopathic elixir. People throughout Great Britain have used the seeds to make hot mustard baths to help people recover from the common cold. Eastern Europeans mixed ground mustard seeds with honey to use as a cough suppressant. In Eastern Canada, woodsmen and farmers would make a poultice of ground mustard seeds, flour, and water. This mixture would be placed on the chest to treat respiratory infections.