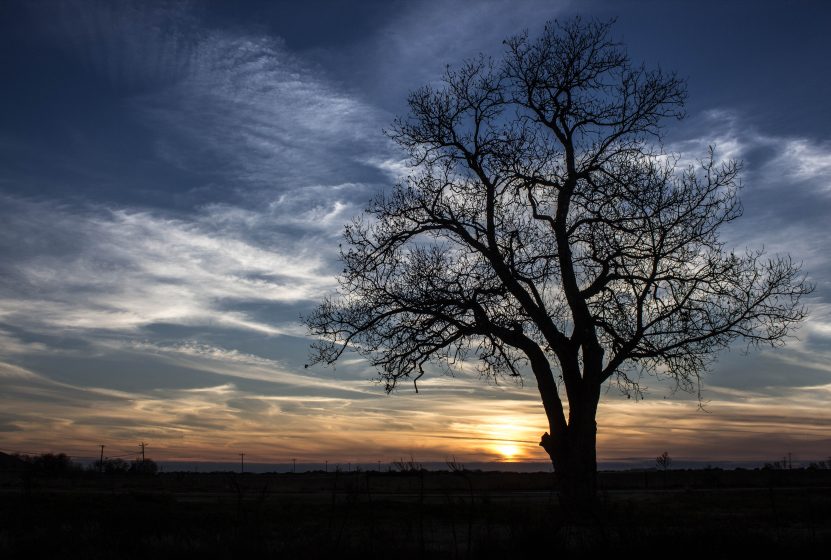 As the only major tree nut indigenous to North America, the pecan (Carya illinoinensis) has a long history as a treasured delicacy, building material, and delicious edible nut, prized hardwood, and beloved state symbol.

The pecan is a native species of hickory that originated in the southern U.S. along the Mississippi River. The pecan is also the only significant American nut tree that has never been found growing naturally in any other spot in the world.

The pecan is a deciduous tree that can grow to more than 130 feet tall with a canopy between 40-75 feet. The trunk, covered by a grey ridged bark in younger trees that darkens with age, is up to seven feet in diameter.

Each spring, the pecan produces a long string of green flowers called catkins. Since the flowers develop into fruit through cross-pollination, most pecans don’t produce fruit until the trees are between 6-10 years old.

The catkins mature into an oblong green fruit with four husks. As the fruit of other trees in the hickory genus, the pecan fruit is not considered a proper nut. It’s a drupe – a fruit with a single pit surrounded by a husk. The drupe develops throughout the summer and early fall until they are ripe enough to be harvested in late October.

Pecan wood is a favorite of woodworkers for making furniture, cabinets, and flooring. The wood is durable and resistant to fungus. Its color ranges from light brown with dark streaks to red-brown with tan or black stripes on the growth rings. Just like its cousin Hickory, Pecan wood is also popular with pit masters and grill masters alike for cooking over open flame and smoking meat.

Eaten raw, the pecan seeds have a buttery flavor. The nut’s exterior has a slightly bitter taste, while the inside is sweet and somewhat fatty feeling on the palate.

The pecan is frequently used in cakes, cookies, and ice creams in cooking. Perhaps since pecan pie is the quintessential dessert staple in the South, the pecan is honored as the state tree of Texas and the state nut of Alabama and Arkansas. Oklahoma has even included pecan pie as part of its state’s official meal.

The pecan nut is comprised of 72 percent fat, 14 percent carbohydrates, and 9 percent protein. The nut is a high source of manganese (215 percent of Daily Value) and thiamin (57 percent).

Pecans have been certified as a “Heart-Healthy Food” by the American Heart Association and are a good source of calcium, magnesium, and potassium, which help lower blood pressure. Most of the fat found in pecans is a healthy type called monounsaturated fat.  Eaten in moderation unsaturated fats of this type can have a protective effect by lowering total blood cholesterol.

Pecans are relatively new to large-scale farming compared to other domesticated crops. Commercial cultivation didn’t start until the late 1880s and is purported to have begun in 1850 in San Saba, Texas. The town, which claims to be the “The Pecan Capital of the World,” is home to the “Mother Tree,” whose progeny became the source for Texas’ commercial pecan production.

The name pecan comes from the Algonquin word “pecane,” which refers to nuts from the pecan, walnut, and hickory trees. Native Americans used pecans as a significant food source in the fall months. They also made nut milk known as powcohicora. This was prepared by grinding the pecans into a powder and then fermenting the liquid mixture.

Other parts of the pecan tree were used as well. The Comanche used the tree’s leaves to treat ringworm, and the Kiowa used the bark to treat tuberculosis.

The pecan was also a trading commodity between Native American tribes and the early European explorers. Cabez de Vaca, a Spanish explorer shipwrecked near Galveston, Texas, was introduced to the pecan in 1528 after being captured by members of the Karankawas tribe.

As expected Squirrels love pecans, but they aren’t the only ones nutty for these butttery treats. Many Wild animals such as blue jays, crows, raccoons, possums, mice, hogs, and even cows enjoy pecans for their delicious source of needed calories.