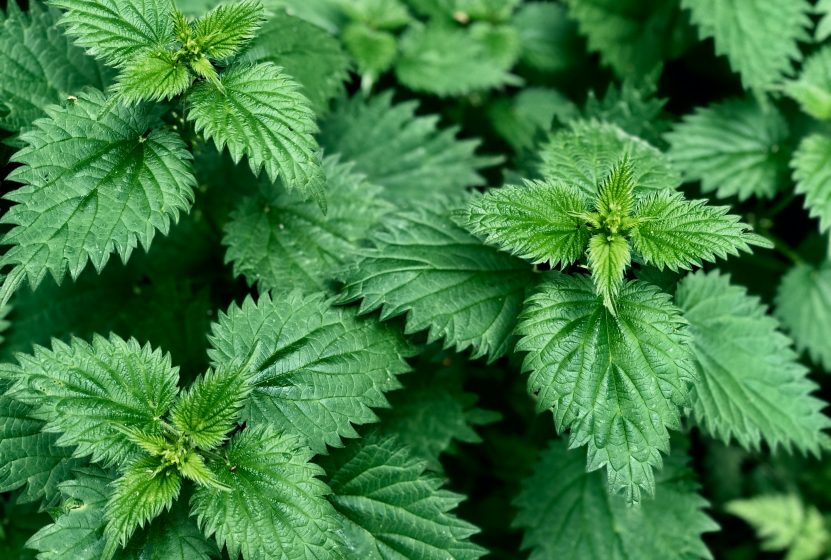 You can’t call yourself a true off-trail adventurer until you’ve worn shorts and blazed a path through a patch of “stingers” or stinging nettles!

At first glance, these tall plants look harmless, but they are covered with tiny, fine hairs that inject a cocktail of irritants into the legs and arms of any unwary hiker. While the stinging nettle has rightfully earned the nickname of “devil’s plaything,” the plant has also been treasured for centuries for its nutritional, medicinal, and functional properties.

As one of several nettles in the Urtica genus, the stinging nettle (Urtica dioica L.) can be found in temperate climates along roadsides, rivers, creeks, and transitional spaces in forests. The plant is native to North America, Asia, Africa, and Europe.

The stinging nettle is a perennial that can grow up to 6 feet tall in a season. Nettles grow in dense colonies and can be recognized by their coarsely toothed bright green leaves with pointed ends. Smaller leaves are more heart-shaped, and more mature leaves can be several inches long.

The nettle blooms from March through September, with each flower containing four greenish-white petals. The flowers are arranged in dense clusters near the top of each stem.

The stinging nettle’s name is derived from the Anglo-Saxon word “noedl,” meaning “needle. Even the plant’s Latin name “Urtica” provides an apt description of its properties: “to burn.”

Fittingly, both terms describe the hidden surprise found on the nettle’s stem and underside of its leaves. There, thousands of tiny hairs lay in wait for unsuspecting passersby and wayward Boy Scouts pretending to be Indiana Jones.

The stinging nettle’s hairs are so small they are practically invisible to the naked eye. The hair, or needle, is composed of a tube-like structure, with a hard round bulb at the tip and a softer section at the base. When the bulb contacts skin, it breaks off, sticks in the skin, and injects a cocktail of neurotransmitters.

These neurotransmitters include histamine, acetylcholine, serotonin, and formic acid, the same chemical found in ant and bee stings.

The result is a gnarly burning sensation accompanied by a temporary, itchy rash that can last up to 12 hours.

If you’ve come in contact with stinging nettle, try to wash the affected area with soap and water to remove the nettle hairs. Then place a moist cloth or ice pack on the skin to minimize itching and pain. If you’re close to your camp kitchen, you can make a paste of baking soda and water or oatmeal and baking soda. Apply that mixture to the skin to reduce itching.

While a nuisance to hikers, stinging nettles improve soil conditions and support more than 40 species of insects.

When handled carefully, the stinging nettle can also play a beneficial role to humans.

Due to the plant’s high content of tough fibers, nettles were used as a cotton substitute by Germany and Austria during the First World War. The fibers were spun into a yarn called Nesselgarn that was later woven into Nesseltuch cloth and used in army uniforms.

The nettle’s use as a textile was not new. Archaeologists even found a 2,800-year-old piece of nettle cloth uncovered at a Bronze Age burial site in Denmark.

The stinging nettle is also one of the more commonly used medicinal plants. As a result of its high nutritional content, it has been used as the main ingredient in dietary supplements. Today, nettle extract is touted as an elixir for enlarged prostates and urinary tract infections.

People worldwide, from the Himalayas to the British Isles, have also consumed nettle leaves, which have a taste and texture similar to spinach. The leaves and stems of young plants are rich in iron, potassium, manganese, calcium, iodine, beta-carotene, vitamin C, and the B-complex vitamins.

Romans even used nettles to make a nutritious broth named after the Gaelic saint Columba (521-597 AD). Columba lived on the Isle of Iona, off the western coast of Scotland, and was fond of a nettle stew. His recipe, “St. Columba Stew,” has survived the ages.

Once cooked, the nettle’s hairs lose their sting. The trick, of course, is to get them in the pot without touching the plant.

While it’s best to avoid walking through stinging nettle patches, you may still be tempted to experiment with their culinary properties.

****Danger Warning**** Despite the stinging nettle’s beneficial nutritional and medicinal qualities, consuming nettles may cause a skin rash in some individuals. Allergic reactions have also been reported when ingesting raw nettle leaves.

One Response to The Stinging Nettle