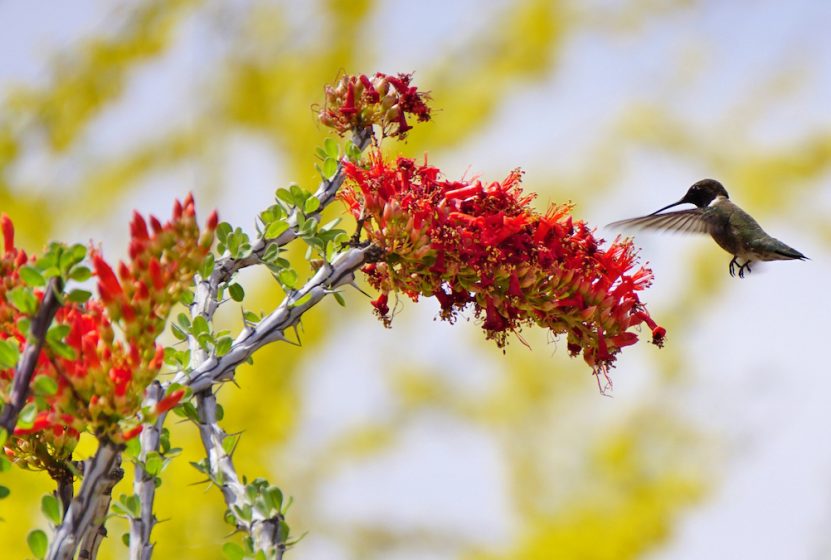 The Ocotillo (Fouquieria splendens) is a desert plant of the Sonoran and Chihuahua desert. It can be found in the Southwest corner of the United States in Texas, New Mexico, Arizona, Nevada, and California. The Ocotillo prefers rocky and sandy soil that drains quickly from sea level up to nearly 7,000 feet.

Despite its thorny armor and desert address, the Ocotillo is not a cactus, but rather a distant relative of the blueberry and tea plants.

The Ocotillo is easily recognizable for its tall thin branches that resemble an exotic coral. It is sometimes called coachwhip, Jacob’s staff, vine cactus, and Flaming Sword for the bright red flowers that only grow on the plant’s tips.

Like other desert dwellers, the Ocotillo survives by limiting moisture loss by having small waxy leaves. Thorns surround the leaves to discourage all but the hungriest animals like Big Horn Sheep and White Tail Deer.

Most of the year the Ocotillo looks dried and lifeless while it lays dormant until rainfall comes in spring and the Summer Monsoon season occurs. Once water is available the Ocotillo quickly grows its leaves and the flowers bloom.

This annual burst of life just so happens to coincide with hummingbirds’ migration that is mutually beneficial for the plant and the traveling birds.

While on layover the hummingbirds get to rest and drink the nectar and help enable the Ocotillo’s reproduction by pollinating neighboring plants.

An Ocotillo may sprout and lose its leaves up to five times in a year as rain showers come and go. Once the soil dries out, the leaves fall off and the plant goes mostly dormant again.

Besides feeding pollinators the Ocotillo has long been used by humans for a variety of medicinal treatments, food, and building material.

The red flowers can be eaten as is or used in medicinal teas to address a variety of internal disorders. Native Americans also use the flowers and roots over fresh wounds to slow bleeding, pain, and inflammation. Other preparations are said to alleviate coughing, achy limbs, varicose veins, urinary tract infections. After the flowers drop off the seeds can be harvested, pounded, and eaten as a porridge.

When planted close together the Ocotillo forms a living wall whose thorns provide extra protection to keep out unwanted visitors on two and four feet with the added bonus of beautiful red flowers blooming throughout the year.