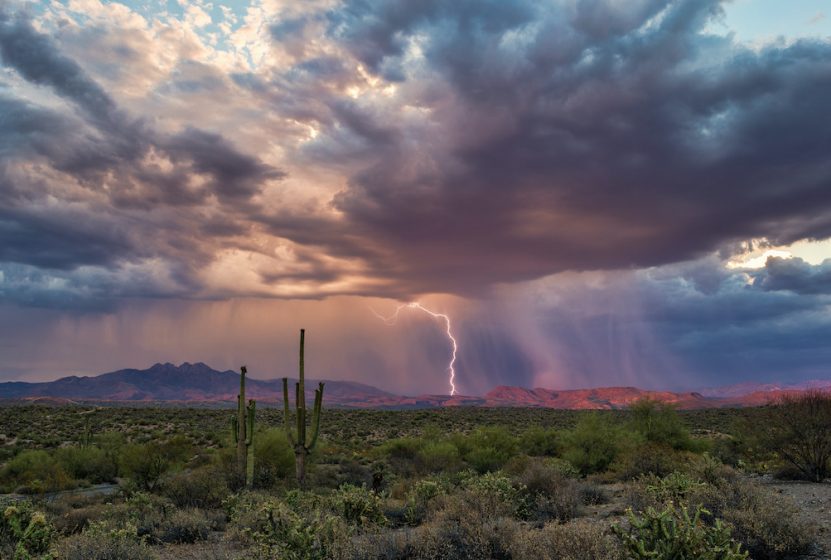 While the rest of the world typically has four seasons, the desert southwest has five: fall, winter, spring, summer, and monsoon. The monsoon rains rejuvenate the desert at the end of a hot summer. Still, they can also create hazards for outdoor adventurers due to rapidly changing weather conditions.

The Desert monsoon is a seasonal wind shift that brings a striking increase in thunderstorms and rainfall to the southwestern United States. Also known as the Southwest monsoon, New Mexican monsoon, and Arizona monsoon, this summer weather phenomenon typically generates nearly half of the annual rainfall in these parched desert environments.

During the winter months, the primary wind flow is from the west or northwest. Moving into summer, the prevailing winds shift to a southerly or southeasterly direction. Once moisture from the Gulf of Mexico and the Pacific Ocean starts getting sucked northward, the monsoon season starts to kick off.

These storms are fueled by intense surface heating and start dumping precipitation in the late afternoon and early evening. They typically dissolve by evening, and the cycle starts over the following afternoon.

After nearly three months of hot and dry weather, the monsoon brings a much-needed reprieve for desert wildlife. These rains often prompt a second breeding season for many animals. Several butterfly species emerge as a result of the rains, including monarchs, fritillaries, and two-tailed swallowtails.

Summer rains trigger a second breeding season for many animals, from insects to the birds and mammals that feed on the insects. Many butterflies emerge or arrive with the rains; look for monarchs, sulphurs, queens, fritillaries, and two-tailed swallowtails.

Amphibians like the Sonoran green toad, the largest native toad in the United States, begin their breeding cycles in shallow puddles created during the monsoon.

Despite its many benefits, the monsoon can also bring hazardous weather, including lightning strikes, flash floods, zero-visibility dust storms, and even wildfires.

Up until recently, the monsoon season’s start was determined by a meteorological trigger: three consecutive days with a dew point of at least 55 degrees Fahrenheit.

Dew point is a measure of the amount of moisture in the air. When it’s above 55 degrees in the arid desert, that’s considered humid. Since this standard was confusing and inconsistent, officials from the National Weather Service scrapped the dew point trigger and now use a hard date: monsoon starts June 15 through September 30th.