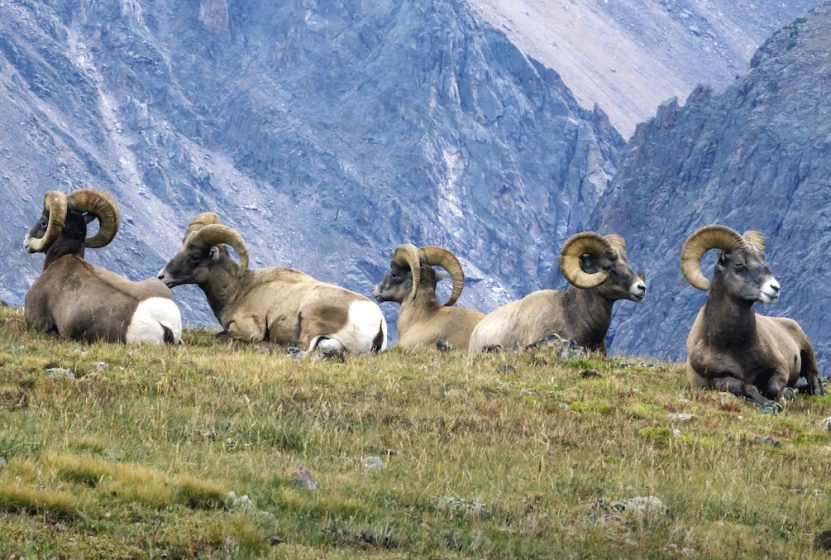 The bighorn sheep (Ovis canadensis) is one of three species of mountain sheep living in North America. Recognized by the male’s large, curving horns, the bighorn sheep is a legendary climber and resident of the continent’s western rocky terrain.

There are less than 70,000 bighorn sheep in the continent, and they can be found throughout the western mountainous ranges, from Canada down to Mexico.

The bighorn has a compact body with tan fur trimmed in white on the rump, belly, and muzzle. Adults will stand about 40 inches tall at the shoulder and weigh between 150 to 250 pounds with larger males tipping the scale at 350 pounds.

Similar to goats, the bighorn has split hooves and coarse hoof bottoms to aid in balancing and gripping, giving the animal uncanny climbing abilities on steep and loose terrain. The outer hooves are modified toenails that are shaped to catch any slight edge. A soft inner pad, or sole, between the hooves molds to the surface to increase traction. As the bighorn walks across steep rocky mountainsides, the sole conforms to the shape of the rock’s edges. Those edges are then encased by the hard outer hooves making it nearly impossible for the hoof to slide.

Living in steep mountainous habitats allows the bighorn protection from terrestrial predators like bears, coyotes, wolves, and mountain lions. However, it does not keep golden eagles from preying on the young sheep during their first few weeks of life. Most bighorn sheep rams can live up to 12 years in the wild and females up to 15 years.

Bighorns strategically place themselves in the herd facing different directions to provide early detection to threats.

Bighorns live in large social groups with the rams (males) living in bachelor groups, and the ewes (females) live in groups with other females and young males. These groups join during the rut from October through December.

The rut is where the rams use their 30-pound horns to establish mating dominance. The ram competition involves two older males running toward each other at speeds up to 40 mph and clashing horns. The bighorn has evolved a thicker skull structure and neck musculature to prevent injury. Two rams smashing their skulls together generate ten times the force of two football players colliding head-on.

The headbutting combat continues until one ram submits and walks away to find some extra strength aspirin.

Once mating is complete, the herds once again separate. With a six-month gestation period, the female will give birth in the spring. Lambs are born on high ledges to protect them from most land-based predators. The lambs can walk soon after birth and join the herd in one week. The lambs will nurse for their first four to six months before grazing on the grass, seeds, and other available vegetation.

Like other ruminants, bighorn sheep have a four-part stomach that enables them to quickly chow down on large portions before moving back to higher ground. Once safe, the fermented food is regurgitated as cud, which is then chewed again before swallowing it for final digestion. This digestive process allows the bighorn to absorb moisture, enabling it to go for more extended periods without water.

The bighorn sheep were sources of food, clothing, and tools for Native American tribes. Indigenous peoples around Puget Sound would often boil the horns until soft and then mold and press them into desired shapes for knife handles and dishes. The Bighorns are one of the more common petroglyph images carved on rocks across the western U.S.

Once numbering close to 2 million at the beginning of the 20th century, the bighorn sheep’s population plummeted to only several thousand animals due to overhunting, competition with livestock, and habitat loss. Close to extinction, the animal has made a remarkable recovery due to conservation efforts. Campaigns by Boy Scouts and other wildlife advocates in the 1930s resulted in the establishment of two bighorn game ranges in Arizona: the Kofa National Wildlife Refuge and the Cabeza Prieta National Wildlife Refuge.