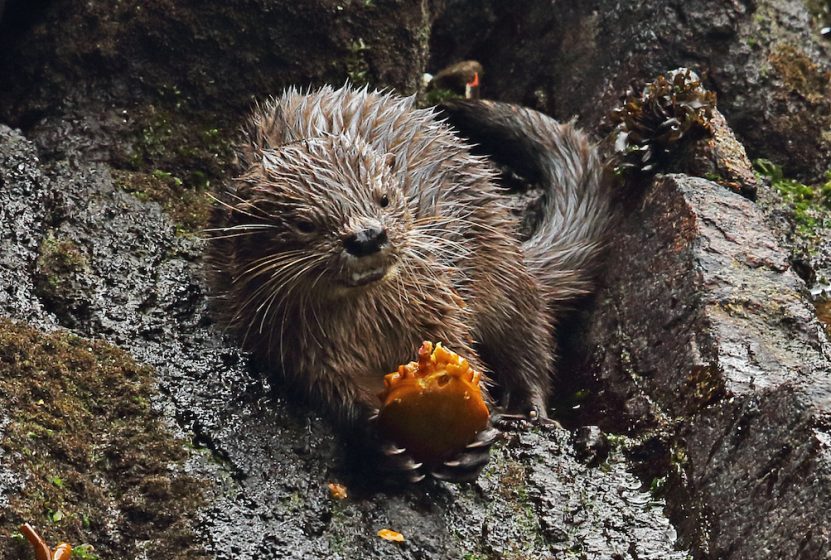 The marine otter’s scientific name Lontra felina translates to “otter cat” in Spanish due to its cat-like appearance with a blunt nose and prominent whiskers. The elusive mammal is often called Chungungo in Chile.

Over the past several decades, the marine otter has been hunted to the point of near extinction. Even though fishermen have domesticated and trained young marine otters, they are still considered the competition. They are poached for their pelts that are prized for their use in boots. Fisheries also blame the otter for reduced fish and shrimp populations and will illegally trap or kill them.

Found along the Chilean coast and intertidal waters of northern Peru, the marine otter is the smallest marine mammal with its nose-to-tail length averaging between 34 to 45 inches. This little otter weighs about 11 pounds, compared to the male sea otters, which tip the scales between 50 and 100 pounds.

The male and female marine otter is similar in appearance. Both sexes have dark brown fur on the back and sides and light brown on the throat and belly. Their coarse coat has ¾-inch long guard hairs that cover a dense insulating underfur.

The marine otter’s webbed paws aid in swimming even though the webbing does not extend to the toes. This allows for greater flexibility and gripping when moving across the rocky shoreline. Each toe is equipped with a blunt claw that it uses to grab and hold its prey.

This otter spends nearly 75 percent of its life hunting and eating. With a diet made up of fish, mollusks, and crustaceans, the marine otter’s teeth are shaped for slicing rather than crushing. Its favorite food is the Chilean King Crab and freshwater prawns. The otters will often head far up freshwater streams in search of the seven-inch delicacy.

Marine otters will also dine on sea birds and fruit from seaside shrubs.

Wherever conditions are not comfortable are where you will find the marine otter. Unlike its otter cousins that prefer calmer waters, this South American otter prefers to inhabit rocky shorelines, caves, and crevices that are exposed to large swells and strong winds. They also seek out coastal areas that have no land access during high tide.

An excellent rock climber, the marine otter will range up to 100 feet inland and rely on dense vegetation for cover from predators.

The animal is often solitary but has been seen in small groups of up to three. The otter’s peak activity is in the early morning, mid-afternoon, and early evenings.

Marine otter breeding occurs in December and January with litters between two and four pups born after a 60-70 day gestation period. The pups will remain with their mother for up to 10 months while she feeds them and teaches them how to hunt. Like other otters, the young will rest on their mother’s belly while she swims on her back until they are strong enough to swim on their own.

Rapidly increasing habitat destruction and persecution by poachers and fisheries are expected to reduce the marine otter population to less than 500 animals within the next 10 years.

The marine otter is protected under Argentine, Chilean, and Peruvian law. Sadly, hunting has eliminated this very special otter from most of Argentina and the Falkland Islands. Despite its endangered status, relatively little is still known about the marine otter’s population, habitat, and potential recovery strategies. We hope that people will come to know these small but tough seafarers and help them regain their rightful place along the rugged South American coastline.

One Response to The Marine Otter