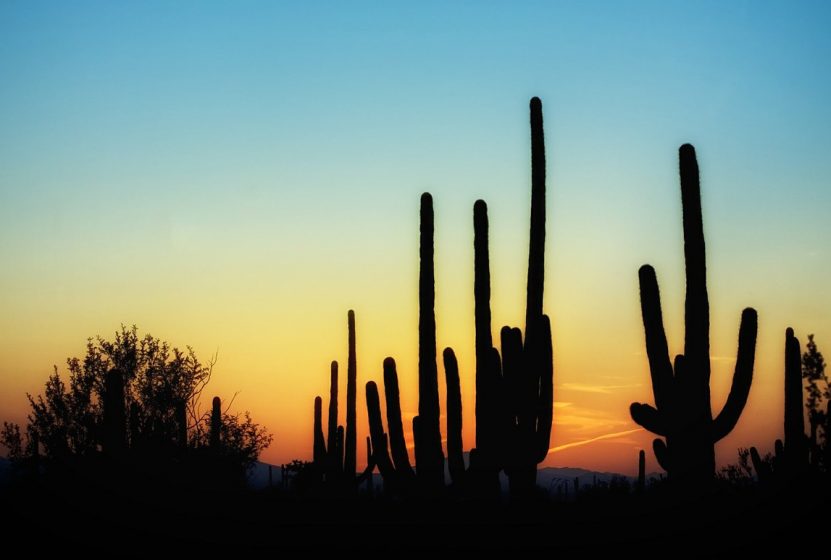 The Saguaro Cactus (Carnegiea gigantea) is an instantly recognizable symbol of the Desert South West though it is only found in a small area of the Sonoran Desert in California, Arizona, and Northern Mexico. For the Saguaro the key to success in the harsh desert climate is to take things slow.

Saguaro can grow to be as tall as 78 feet high and weigh in at several tons but this doesn’t happen overnight. In fact, it can take up to 200 hundred years! In its early days, Saguaro are tiny and got their start in the shadow of other plants such as ironwood palo verde or mesquite. 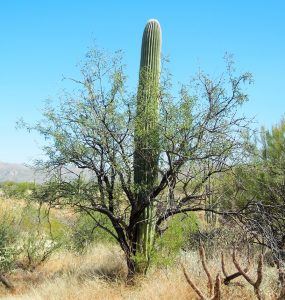 Growing from seed to 1-2 inches tall can take nearly a decade. Depending on rainfall the Saguaro will flower in about 35 years and in half a century the Saguaro will begin to grow its first branch otherwise known as an arm. After 125 years they will finally be considered an adult and have as many as 50 arms.

Besides growing very slowly the Saguaro adapts to the arid desert by collecting as much water as it can when it does rain and then conserving the precious moisture during dry spells.

The root system of the Saguaro is three-pronged: It has a single two-foot taproot that helps anchor the one-day giant to the rocky soil. The next layer of roots radiates just below the surface of the desert floor and then finally the third layer of roots extends out as far as the cactus is tall.

The waxy and leafless exterior of the Saguaro prevents water loss by evaporation and the two-inch spines point down to help channel water to the roots during rainfall. Internally the Saguaro is corrugated to allow the cactus to expand and hold the maximum amount of rainwater after a storm. 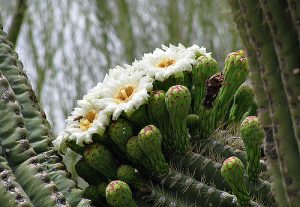 The Saguaro also provides food and shelter to many animals and humans too. Birds, bats, and insects dine on the Saguaro’s strongly scented white flowers that only open at night. In exchange for the meal, the flying nectar feeders help pollinate neighboring Saguaros as they cannot do this themselves.

The Saguaro itself also serves as a home for many birds that will bore into the cactus high and enable them to live safely elevated away from predators with a built-in spikey security system. Bobcats are known to risk a few spines in the paw and seek refuge from Mountain Lions upon a tall Saguaro. 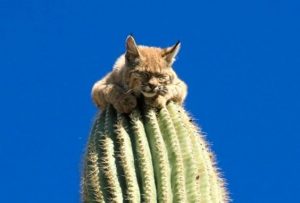 Humans also use the Saguaro for food and shelter. Native Americans have long collected the tasty red fruit of the giant cactuses and the former homes of the birds create what is known as a “Saguaro Boot”. A Saguaro boot is the plant’s protective reaction to a bird burrowing into its body by forming a leathery scar around the hole.

When a Saguaro dies the hard boot which looks like a wooden clog is left behind and was used by Indians as a water-tight container. Furthermore, the woody internal ribs of the Saguaro were used to fashion tools and as a building material in dwellings since wood is so scarce in the desert.

If you want to find these long-lived giants of the desert the easiest way is to visit Saguaro National Park or Organ Pipe Cactus National Monument in Arizona during the cooler winter months. IF you don’t mind the heat, Spring and early Summer are also interesting times to see the Saguaro as they bloom in April and the fruit is usually fully ripened by June.