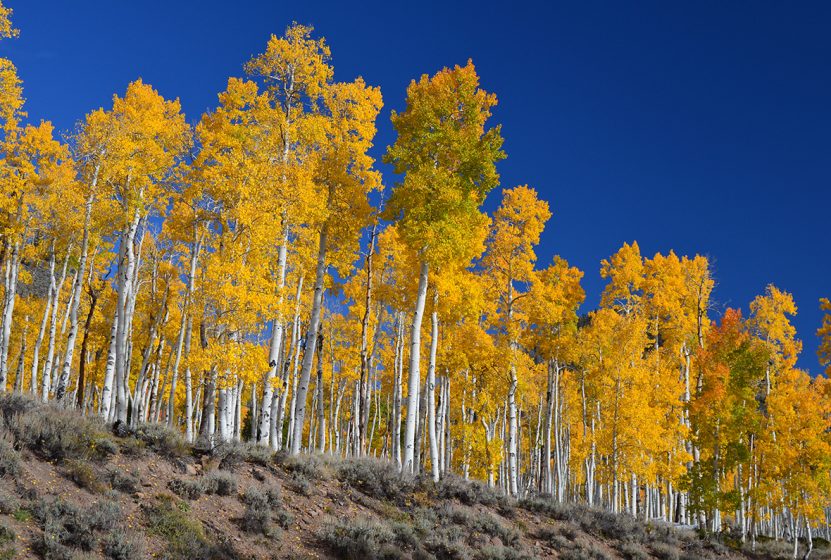 One of the world’s oldest living organisms has survived drought, wildfires and lived past the extinction of woolly mammoths, saber-tooth cats, and the rise and fall of several human civilizations. Yet, in the end, cattle and mule deer may be its demise.

This organism, nicknamed Pando (Latin for “I spread”), is a clonal colony of quaking aspens (Populus tremuloides) located in the Fishlake National Forest, Utah. Connected by a “neural network” composed of one root system, these trees are actually more than 48,000 clones or genetically identical trees.

While tree ring samples date the oldest individual trees in the Pando colony to no older than 130 years, scientists can only estimate the organism’s age by the colony’s size. The Pando colony spread over 108 acres and estimated to collectively weigh 6,600 tons — also making it the heaviest known organism on the planet — is thought to be approximately 14,000 years old. Some scientists, however, believe it could be as old as 80,000 years.

Like those in Pando, clonal trees are genetically identical trees that remain connected through a single root system, sharing water, minerals, and other essential nutrients. Although there may be hundreds, if not thousands, of trees in the colony, they are considered one organism. That root system, when aged with radiocarbon dating, is much older than individual trees.

The Pando colony sprouted from a single seed about the size of a pepper grain. It grew larger and larger by producing stems to support its spreading root system. Today, Pando is roughly the size of 80 American football fields.

When individual trees die in the colony, they are replaced by new stems growing from the organism’s roots. An individual stem sends out lateral roots, which then grow upwards through a process known as suckering. This growth repeats until an entire collection of individual trees form. However, they are all part of the same genetically-related organism.

One of the unique features of the quaking aspen is its striking white bark. This outer layer is living tissue and carries out photosynthesis, an ability that makes it unique among trees.

Yet, aspen bark does have a few disadvantages when it comes to protecting the tree. It has low fire resistance, is soft enough to carve you and your sweetie’s initials in it, and is a popular food source for mule deer and elk.

Overgrazing is one of the main reasons why the Pando colony is thought to be dying. While it’s natural for old stems to die, researchers have discovered that new stalks are not growing. Mule deer and cattle have been eating nearly all of the new stems over the past 20 years. As a result, there are no young or middle-aged trees in the colony, only old ones.

Quaking aspens are not the only plants that genetically identical clones. Other clonal trees include willow, blackberry, fig, and banyan. Herbaceous plants like the strawberry and ferns like the goldenrod also form clonal colonies.

While Pando is the largest and oldest clonal tree organism, other substantial colonies exist throughout the world.

A colony of Huon pine trees (Lagarostrobos franklinii) covering about two acres on Mount Read in Tasmania got its start about the same time humans were transitioning from a lifestyle of hunting and gathering to one of agriculture and settlement about 10,000 years ago. In addition to the colony’s root system’s estimated size, scientists have also calculated its age from DNA samples taken from pollen trapped in the sediment of a nearby lake.

The Jurupa Oak colony in southern California is thought to be around 13,000 years old. This organism consists of approximately 70 Palmer oak (Quercus palmeri) stems in a thicket that covers nearly 700 square feet. This species of oak only grows new stems after wildfires.

The Jurupa colony has also played a critical cultural role with the indigenous Kizh people for centuries. While the tribe considers oak trees to be medicinal and associated with strength and protection, the Jurupa colony is revered for its size and longevity. The sacred site has been used for wedding ceremonies and peace conferences.

Clonal colonies of trees have been around since the dawn of civilization, growing larger than any other organism on the planet. Their awe-inspiring size and resilience continue to inspire scientific curiosity and reverence worldwide.