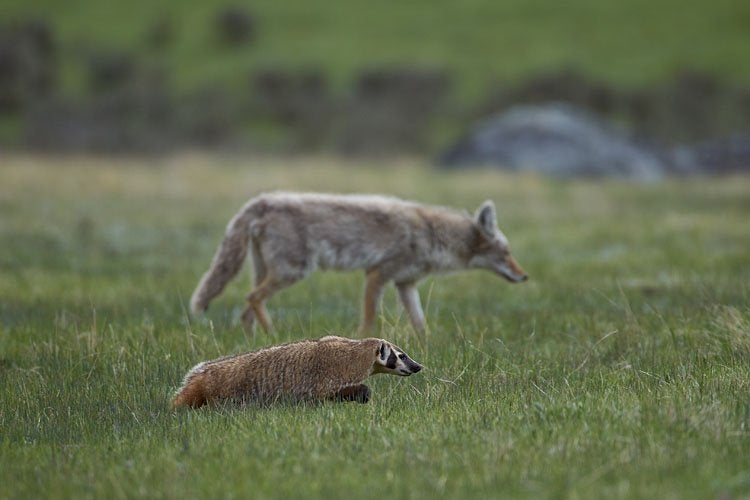 Humans (Homo sapiens) aren’t the only species who have found value in partnering with competing predators in the Canidae family. While early man and wolves formed hunting alliances which led to the rise of the domestic dog, other animals have also found value in developing symbiotic relationships with canids.

In the summer months, a single coyote may pair up with a single badger for hunting these burrowing rodents. A 1992 study published in the Journal of Mammalogy revealed the strategy of this temporary hunting partnership. Coyotes wait near a hunting badger in anticipation of the moment when the badger’s digging flushes a ground squirrel from its burrow system. If the squirrel detects a coyote is nearby, it will stay in its burrow longer, giving the badger more time to dig and catch it.

While the animals aren’t besties and don’t share the rodent meal, the partnership yields a higher bounty for each predator with less energy expenditure. Coyotes partnering with badgers catch an estimated 30 percent more ground squirrels than working solo.

On tropical reefs throughout the Indo-Pacific the Clown fish and Sea Anemone form a tight bond where one fish will stay with an individual Anemone for the long haul. Almost everything one organism does seem to benefit the other in a continuing circle of give and take.

Normally touching the tentacles of an Anemone will stun a fish which will then be devoured. The Clown Fish has a mucous covering that won’t cause the Anemone to fire its sting cells when contact is made. With this protection the Clownfish can seek shelter from larger fish that are on the hunt.

The bright orange color of the Clownfish may act as a lure to other small fish who come too close and get entangled by the anemone.

Clownfish get to eat the tidbits dropped by the Anemone and they will also nibble away dead tentacles again boosting the overall health of the Clownfish’s landlord.

Oxpecker/ Pretty Much Everyone

Across the savannas of Sub-saharan Africa the two species of the Oxpecker (Red Billed and Yellow Billed) feed exclusively on the smorgasbord of ticks and insects found on the backs of large mammals.

Zebras, Impalas, giraffes, hippos, wildebeast, cattle- you name it, have beak will travel.

The Oxpecker’s beak is pointed yet stout and perfectly adapted to get into even the toughest skin and tease out parasites the pester their host. This service rids the larger animals of potential disease and infection. From the looks of it it seems quite enjoyable and maybe the animal kingdom’s version of a spa treatment.

Other canid hunting alliances have been observed between grey wolves (Canis lupus) and striped hyenas (Hyaena hyaena) in Israel’s Negev Desert. Both species are highly intolerant of other carnivores, yet researchers started noticing a pattern of socialization. They discovered hyena tracks overlapping wolf tracks and vice versa, indicating the animals were walking together at the same time. A few years later, researchers witnessed the hyenas and wolves moving together as a pack.

Researchers found that the wolves’ average success rate was about 25 percent when hunting without the help of the gelada. With the primate’s inadvertent help, that rate skyrockets to 66.7 percent.

This type of symbiotic hunting relationship is also mirrored in a remarkably similar interspecies alliance that was discovered in the Red Sea in 2006. The coral grouper (Cephalopholis miniata), an open water hunter, was observed partnering with a hole and crevice predator, the giant moray eel (Gymnothorax javanicus).

After a failed hunt, groupers will visit moray eels resting in the crevices of coral reefs and rapidly shake their heads inches away from the eel. This signaling recruits the moray eel to join the grouper in the hunt with the grouper leading the eel to the prey’s hiding spot. Once at the hide site, the grouper will use slow head shakes to show the eel the prey’s location. Just like the coyote and the badger, either the eel will capture the cornered prey, or the grouper will grab the fish if it tries to escape into open water.

These unlikely coalitions between species have led researchers to understand that animal behavior is far more flexible than previously assumed. When environmental conditions or opportunities arise, predators are displaying the cognitive intelligence to abandon their usual strategies and adapt to new and unexpected partnerships.

» Field Facts » 5 Examples of Teamwork in the Animal Kingdom