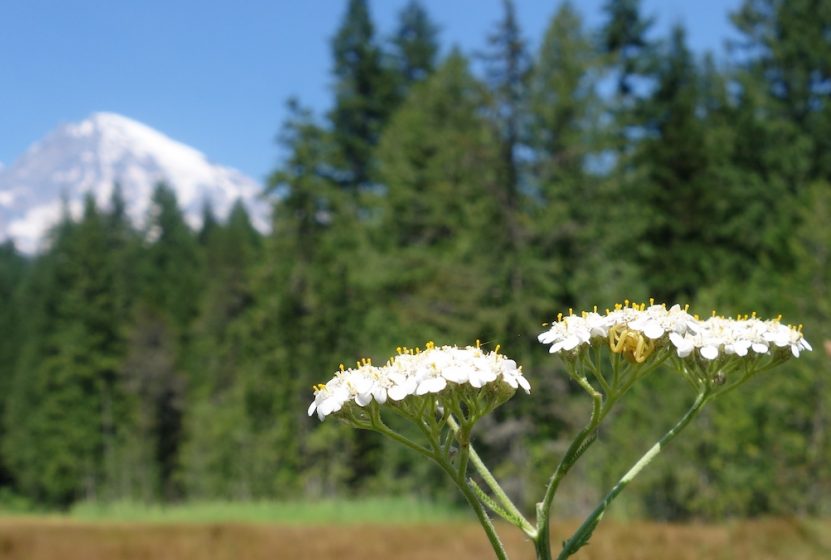 Yarrow (Achillea millefolium) should be renamed the Pharmacy of the Forest. For centuries, Native Americans, pioneers, and modern-day herbalists have been using this plant to fight infections, heal wounds, break fevers, and aid digestion.

Yarrow belongs to the genus Achillea named after the mythological figure Achilles. This Greek hero used yarrow extracts to treat his soldiers’ wounds during the Battle of Troy.

Some of the plant’s well-earned nicknames appear to give credence to its use on the battlefield to staunch blood flow: woundwort, bloodwort, and herb militaris.

Yarrow is found growing in open, sun-drenched fields and meadows throughout the United States and Canada. The herb can also be found in cities and has become a popular plant in many suburban butterfly gardens.

When yarrow first emerges from the ground in the spring, it produces a circular arrangement of feathery, fern-like leaves. In parts of the American Southwest, yarrow is called plumajillo (Spanish for little feather) in recognition of the plant’s distinctive leaves.

As the leaves mature, they reach 3 to 4 inches in length and 1 inch in width. A hardy perennial, yarrow can reach three feet in height.

The yarrow flowers from May through September with the plant’s tiny flowers arranged in flat clusters at the top of the stem. The flowers are typically white, although some hybrids have been cultivated for yellow, pink, and purple.

Herbalists use the leaves, stems, and flowers to create teas and tinctures (a plant extract mixed with alcohol) to help with digestive issues. The leaves are used for salves and other topical applications.

Ditch medicine use of yarrow involves tearing off pieces of the yarrow leaf and placing them directly on the wound to stop bleeding. While yarrow does not appear to have anticoagulant properties, there is some research indicating that applying an ointment containing yarrow over stitches will reduce pain and improve healing.

Among indigenous peoples, the Navajo treated yarrow as a “life medicine” and chewed the plant for toothaches.

The Ojibwe people of the Midwest sprinkled a liquor made of yarrow leaves on hot stones. They inhaled the vapors to treat headaches.

The Zuni in western New Mexico chewed yarrow roots and blossoms and applied the juice to their feet before fire-walking. They would also use the pulverized plants mixed with water to treat burns.

Herbalists have used a cold yarrow tea to help people with urinary tract infections and a hot yarrow tea to break fevers and fight colds and sore throats. Yarrow tea’s astringent properties have also been applied to fighting digestive ailments like diarrhea.

If you’re inspired by movie heroes who are saved by a medicine man or woman chewing a plant and applying that paste to a wound?

Not a great idea.

The bacteria in the person’s saliva will most likely outweigh any antibacterial properties that yarrow brings to the party. Let the plant do its work without adding whatever germs are in your mouth to the wound.

If you’re tempted to try using yarrow, use only the white-flowered variety and follow the basic safety rules of ingesting wild plants.

****DANGER WARNING**** Make sure the plant is actually what you think it is. Yarrow, for example, resembles poison hemlock. If you’re not 100 percent certain of the plant’s identity, don’t use it.

Wait for another hour and see how you feel.

If you have no adverse reactions, work up to a tablespoon, and wait one more hour. If you’ve made it this far without a negative response, your body should be able to handle larger quantities of the plant…but progress slowly.

Yarrow is generally considered a safe plant. It does, however, stimulate the uterus and should be avoided when pregnant.

2 Responses to The Yarrow