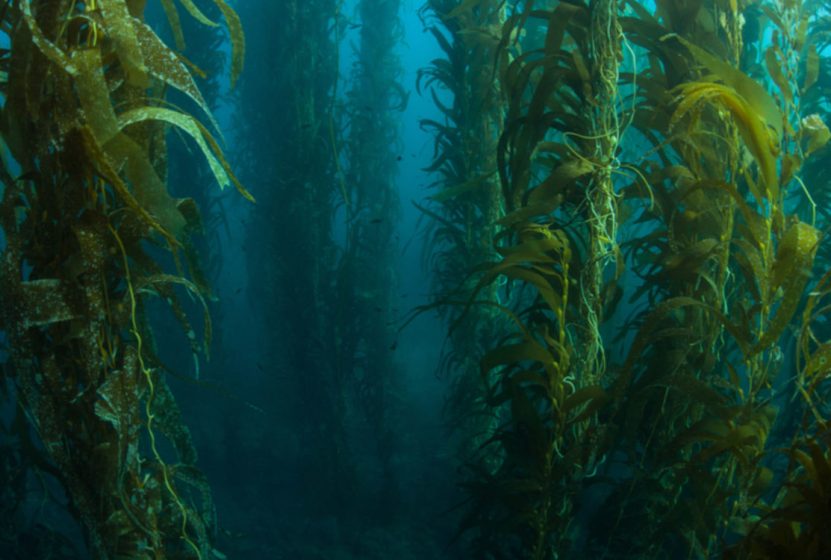 Giant Kelp (Macrocystis pyrifera) is a form of brown algae and the largest of all kelp species. It is not a plant, but rather a complex form of single cells that work together sharing nutrients and performing specific tasks. It has three basic structures: at its base is the holdfast which anchors the kelp to the bottom. Some kelp strands grow so large and the holdfasts are so strong that they have been known to transport heavy boulders considerable distances. Secondly is the stipe which is like the stem of a plant. The blade looks like the leaf of a plant and provides more surface area for photosynthesis. And lastly between the stipe and the blade is the pneumatocysts that are little bulbs that fill with gasses and help the kelp to float upright and reach towards the sunlight. Once the kelp is tall enough to reach the surface it will continue to grow bending and laying flat riding the swells. 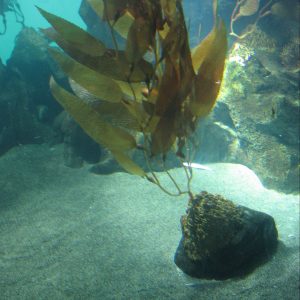 Giant Kelp can be found in near coastal waters throughout the Pacific Ocean from Japan to South America. Local to us, Giant Kelp is abundant along the California coast and the Channel Islands. Giant Kelp thrives in 30- 60 feet of water where there is plenty of sunlight and cool/cold ocean currents that bring nitrogen and other nutrients. In ideal conditions, Giant Kelp can grow as much as two feet in a single day which is faster than any other organism on the planet. Through photosynthesis, the kelp can produce as much oxygen as the Brazilian rainforest in a much smaller area.

When the kelp is concentrated it forms an undersea forest that supports a wide range of organisms. Among the gently swaying vertical columns of kelp fish, mammals, crustaceans, and invertebrates can hide out, feed and find shelter among its tall strands. This creates an ecosystem of its very own and is the reason the Giant Kelp is considered a keystone species. 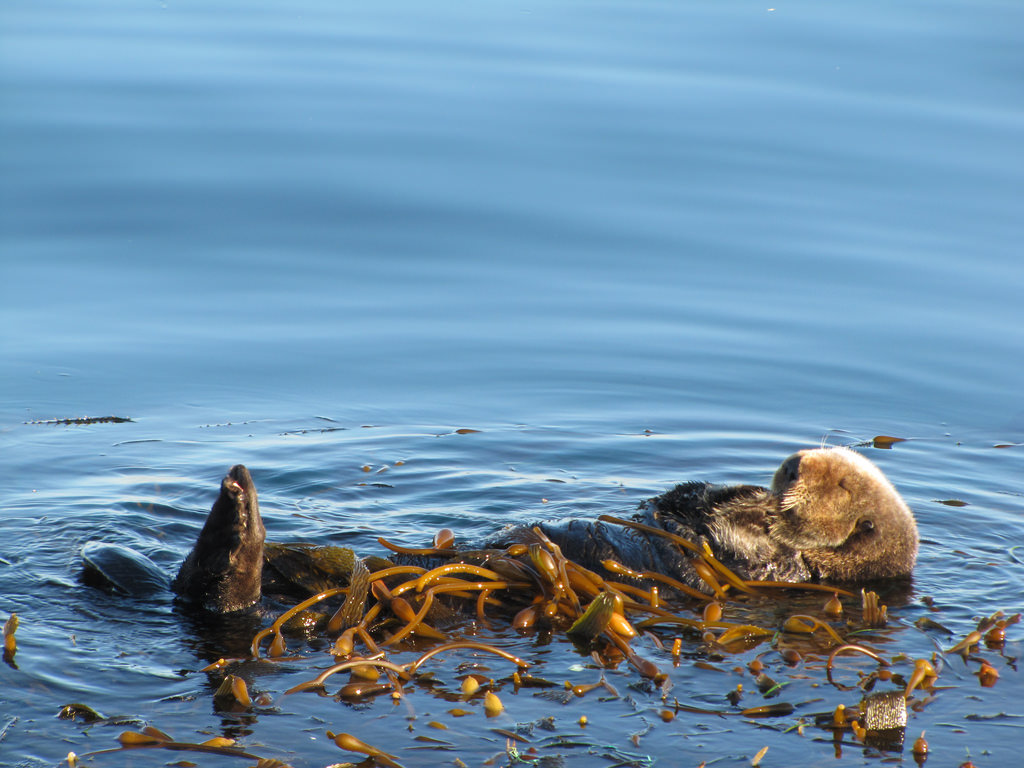 Just one example of the special relationships Giant Kelp has is with Sea Otters. Giant Kelp provides Sea Otters with a place to hunt, play, and tie up when sleeping. The large mats of kelp that float on the surface grooms ocean swells and cause them to lay down producing calm areas surrounded by rough seas. For this, the Sea Otters eat the Giant Kelp’s one true nemesis the Sea Urchin. Sea Urchins travel along the ocean floor and eat the holdfasts of kelp causing them to break away and eventually be stranded onshore where they die. When Sea Otters became scarce due to overhunting there was a secondary negative effect on the Giant Kelp.

Humans also benefit from the Giant Kelp. Collected off the beach it makes an excellent organic fertilizer in your garden. It also can be eaten either outright or it is harvested and the algae are used as a thickening agent in food and cosmetics. Yep, that bowl of ice cream you ate probably had algae in it. Kelp forests provide plenty of recreational opportunities for SCUBA and freedivers who can find an abundant sea life and beautiful underwater scenery.  And just like the Sea Otter, surfers have long sought out surf breaks that are groomed by the kelp and stay glassy all day. 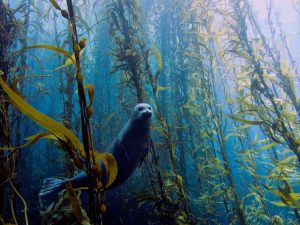