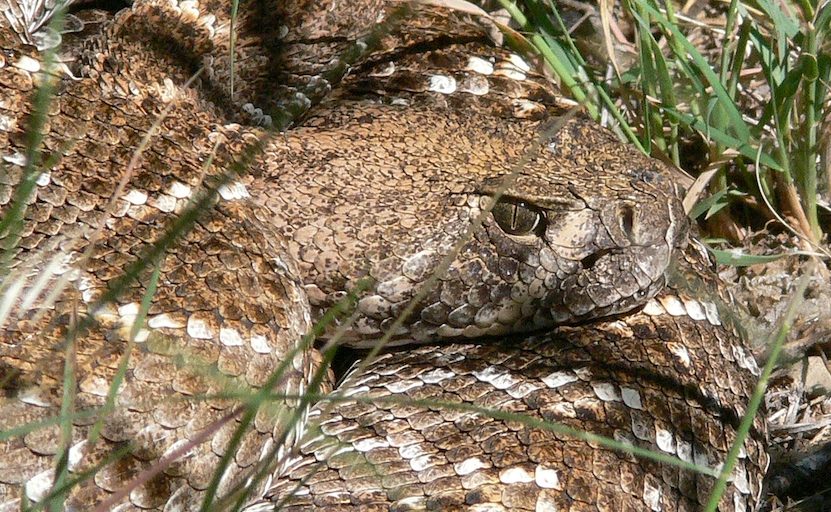 If you believe what you see in the movies, rattlesnakes have nothing better to do all day except to wait for humans to walk by and inject them with venom.

The western diamondback rattlesnake (Crotalus atrox), however, usually has better things to do. Some of its favorite activities are regulating its body temperature and eating rodents.

As one of around 20 species and sub-species of Southwestern rattlers, the western diamondback is recognized by its triangular-shaped head and the dark diamond shapes running along its back. Another distinguishing mark is the alternating black and white rings just above the rattle.

The western diamondback ranges throughout southwestern Canada down to northern Mexico. In the U.S., multiple sub-species can be found throughout Arizona, California, Idaho, Nevada, Utah, New Mexico, Texas, and Oklahoma.

This rattler can be found just about anywhere in these states from below sea level up to about 7,000 feet. It thrives in deserts, plains, forests, mountainous terrain, and even along the coast.

In the summer, the western diamondback spends its time out of the sun, coiled in the shade of rocks and shrubs. The snake also likes to take over the underground burrows of other animals.

In the winter, rattlers will somewhat hibernate in caves or similar protective natural structures. The correct term is brumation, which is a dormant period similar to hibernation but is for cold-blooded animals like snakes. Rattlesnakes will often gather together in large numbers during this period, with sometimes up to 1,000 snakes in one den -Yuck!

Western diamondbacks range in size from three to six feet, depending on the available food sources, and are the largest of the rattlesnake species found in North America.

The western diamondback weighs between three to seven pounds, with some tipping the scale as large as 15 pounds.

Western diamondbacks are a master of blending in with their environment. The colors on their back, which range from light to dark brown, will have darker colored patches down the middle of its back and are shaded to match the surrounding rocks and plants.

Western diamondbacks are pit vipers, which means they have a heat-sensing pit (loreal pit) located behind each nostril. This thermal super sensor can detect differences in temperature within a fraction of a degree and allows it to identify its prey.

Another amazing attribute is the snake’s forked tongue. By flicking the tongue up and down, it can collect tiny airborne particles and gases. When the tongue goes back in the snake’s mouth, it touches the vomeronasal organ located on the roof of the mouth. This organ is the snake’s version of the mass spectrometer. It analyzes the particles and identifies them as food, non-food, enemy, or predator.

The rattler also uses its tongue for navigation. Depending on which side of the fork detects the more potent scent, the snake can determine which direction its prey is moving.

The western diamondback also has external nostrils that are primarily used for breathing, although they can detect some scent.

Since the snakes do not have external ears, they translate ground vibrations to sound. Rattlesnakes sense vibrations through their muscles, and these signals are then transmitted through the jaw bone to the inner ear organs.

The western diamondback’s vision is designed for up-close work, although it can detect movement from about 50 feet away. The snake’s pupils are elliptical, which helps it see well in low light environments.

The western diamondback’s diet is primarily made up of small rodents and lizards. Nearly 75 percent of a rattlesnake’s diet is made up of rodents, and the snakes may consume up to a quarter of the rodent population in their hunting area.

As an ambush predator, the snake will lie in a coil, waiting for its next meal to stroll along. Once the prey is in range, the snake strikes, injecting a paralyzing venom. This venom breaks down cells and tissues, which leads to paralysis, internal bleeding, and death.

Once immobilized, the prey is swallowed whole.

The venom starts the digestive process by breaking down the prey’s tissue. Completely digesting the animal can take several days, during which time the rattlesnake will find a place to hide and lie low. In about two weeks, the western diamondback will be ready for its next meal.

The snake’s fangs are hollow and function like syringes to inject the venom. They are attached to the upper jaw by a hinge so they can be folded into the mouth when in use. The fangs are quite delicate and may break off inside the prey. Fortunately for the snake has reserve fangs that are ready to replace the broken ones.

Scientists have developed a synthetic version of the snake venom to treat high blood pressure. Researchers have also worked with the chemical crotoxin, which is found in rattlesnake venom. Crotoxin is toxic to cells, but it only works on specific blood and muscle cells. Medical researchers have harnessed crotoxin’s targeting and toxicity to find and destroy specific types of cancerous cells.

Even though the western diamondback is an efficient and deadly predator, it still finds itself as a meal for eagles, roadrunners, coyotes, foxes, and kingsnakes. Other animals like deer, antelope, horses, and cows are not rattlesnake fans and will do their best to stomp the snake into a pancake.

The female snake carries her eggs internally until they are ready for live birth in late summer. The baby snakes pierce their thin egg membranes just before delivery. The typical brood size is 9-12 babies. Once the babies are born, everyone goes off in their separate directions in search of food and shelter.

Looking back through its history with humans, the rattlesnake has consistently been cast as a symbol of danger or witchcraft. Native Americans have carved the rattlesnake’s image in petroglyphs to honor what they considered to be a dangerous and holy animal. Some tribes, like the Zuni and Hopi, even had clans that identified with the rattlesnake.

In spite of their fierce reputation, the western diamondback is a reasonably benign creature that would prefer not to interact with people. In the warmer months, keep an eye out when you’re walking near rocks and water. The stones help the snakes absorb heat at night and stay cool during the day. The rattlesnake’s favorite meal, the rodent, also likes to hang out in rocky areas. And both use the rocks as hiding places.

For similar reasons, rattlesnakes also like to be near water. Watering holes provide the perfect opportunity for a rodent smorgasbord.

Still, you should be careful when hiking and camping in areas where the western diamondback lives. If you hear that telltale rattle (which they don’t always give) and hiss, stop immediately. The rattlesnake’s hiss is similar to that of a cat being threatened by a dog. It’s a warning signal you should pay attention to.

Look carefully and see where the hissing and rattling sound is coming from. If you move suddenly, you may startle the snake into striking. As a danger proximity gauge, a rattlesnake’s striking distance can cover about one-third to one-half of its body length. Once you’ve found the snake, plot your slow-motion escape.

If given a chance, the snake will slither away. If cornered, or if you think you’re Steve Irwin and want to catch one to impress your friends, the snake is going to defend itself. Odds are, it will be more successful than you.