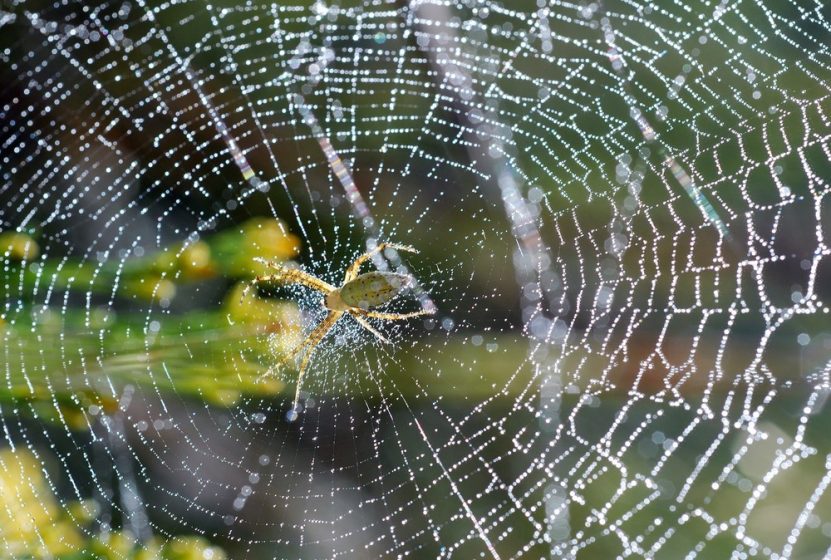 If you have even the remotest hint of arachnophobia, don’t visit Nevada’s Walker Lake in August during the blue damselfly hatch. For decades, this desert oasis has become party central for the orb weaver spider family reunion. Hundreds of thousands of these silk-spinning masters set up their large circular webs on bushes, picnic tables, and bathrooms to take advantage of the late summer insect buffet.

Orb weavers are members of the spider family Araneidae and are the most common group of spiders that build wheel-shaped webs to catch their prey. There are more than 3,000 spiders in the Araneidae family, making it the third-largest family of spiders.

With eight eyes, eight legs, and seven silk-producing glands, these spiders earned the named “orb” after the circular shape of their webs which can reach up to two feet in diameter. While most spiders have two claws on each foot, orb weavers have an extra claw to help spin their intricate webs.

These delicate webs are built in a series of concentric circles starting with the smallest ring at the center and radiating outward as the circles get larger. Lines of silk divide the sectors into circles so the web will look like a pie — if pies looked creepy.

At night, the web is destroyed when the spider eats the silk to reabsorb any moisture that may have collected on the strands. The orb weaver then builds a new web by touch since it has poor eyesight.

The hour-long construction begins with the spider floating a line of silk in the wind until it catches on another surface. Once that line is secured, the orb weaver drops another line from the middle, making a Y-shape. This dragline silk (non-sticky) goes from the center to separate attachment points like branches and building structures. At this stage, the web looks like the spokes of a wheel.

The spokes provide a foundation for the concentric rings that are made with the sticky silk threads. The orb weaver then adds an auxiliary spiral to support the spider’s weight while it continues to add the concentric rings, or catching spirals. As it adds the catching spiral, the spider dots the strands with glue and destroys the auxiliary spiral.

Orb weaver webs also contain a highly visible X-shaped pattern called a stabilimentum. Scientists suggest it may serve as a visual warning to keep birds from flying through the web. Recent studies have found that some Argiope spiders and their webs are invisible under ultraviolet light; the spider disappears, the web disappears, but the zigzag stabilimentum blazes brightly.  This lures insects to their doom thinking they are flying towards a flower.

Once construction is complete, the orb weaver will sit in the center, head down, waiting for its prey to get caught in the sticky silk. The trapped insect’s movements send vibrations through the web to alert the orb weaver that its next meal has arrived.

The spider uses its third claw to walk out on the web to stun the insect with a quick bite before wrapping it in silk and waiting for it to die. Once the insect is dead, the orb weaver will vomit a digestive liquid over it to help soften up the meal. The spider then starts chewing the insect while slurping up its now liquified parts. The orb weaver repeats this process until all that is left are the inedible hard parts which are then discarded as a small ball of residue.

The orb weaver’s lifespan is about 12 months and is dramatically shorter for amorous males, who are about half the size of the 0.75 to 1-inch long females. With mating taking place in the center of the web, the male has to carefully make its way along the web without setting off the vibration alarm and getting eaten by its future mate. About 80 percent of all orb weaver males are killed during the mating process. Some savvy males will create a mating thread to attract the female with vibrations. If he’s successful, the duo will mate on the thread.

Near the end of fall, the female orb weaver lays up to 2,500 eggs encased in silk cocoon attached to foliage. The eggs will usually stay dormant through the winter and hatch in the spring.

In general, orb weavers are docile spiders and will only bite humans if they feel threatened and cannot escape. In other words, don’t pick one up unless you want to get bit. And if you get bit, it’s not toxic but will feel like a bee or wasp sting.

If the orb weaver feels threatened, it may use its legs to shake the web to startle the offender in hopes of scaring it off. If that doesn’t work, the spider will usually drop to the ground to escape.

Outside of Walker Lake, orb weavers can be found throughout the world in forests, fields, and keeping pests out of backyard gardens.