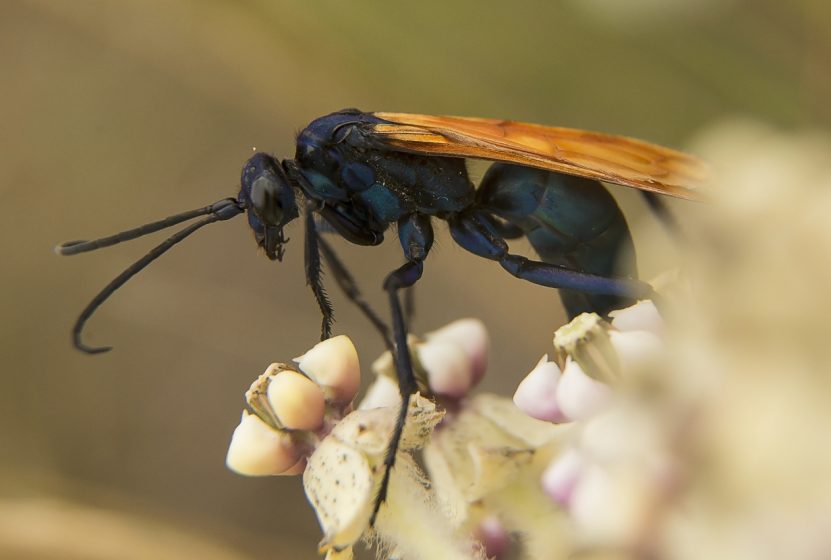 The tarantula hawk is a large wasp that may be the most sadistic flying insect on the planet. This giant, metallic blue wasp brings a world of hurt to any living creature that dares mess with it. It is also the only wasp that actively hunts tarantulas and turns them into zombified buffets for their offspring.

With 18 different species found on all continents except Antarctica, the tarantula hawk wasp is one of the largest parasitoid wasps in the world.

In the U.S., three species of tarantula hawk are found in the deserts of the Southwest, with Pepsis grossa and Pepsis thisbe being the most common.

The tarantula hawk wasp is two inches long, with bright rust-colored wings and metallic blue-black bodies. The wasp has long legs with hooked claws to securely grip its prey long enough to deliver the venom from its 9/32-inch long stinger.

That stinger, which is only on female wasps, delivers one of the most painful stings in the insect world. In fact, the tarantula hawk takes second place on the Schmidt sting pain index.

In case you’re curious, first place goes to the bullet ant of Central and South America. Its sting causes excruciating pain that can last up to 24 hours.

The tarantula hawk’s second place is still formidable. Getting stung by this wasp has been described as “‘instantaneous, electrifying, and totally debilitating.” Fortunately, the pain only lasts 3-5 minutes for humans.

Tarantulas, on the other hand, aren’t so lucky.

This parasitic wasp’s venom has evolved not to kill but to paralyze tarantulas. Even though the tarantula hawk is a nectar feeder, it preys on these large spiders to use them as unwilling hosts for their young.

The female wasp carefully approaches a tarantula and dives underneath the spider. In a deft feat of wasp-jitsu, she flips the tarantula on its back and stings it in a weak point in the arachnid’s armor, typically the leg joints.

These battles don’t always go smoothly. Spiders lose legs during the melee, and wasps sometimes get crunched by the tarantula’s large fangs.

In the end, most wasps win the day, paralyzing the tarantula nearly instantly once the stinger finds its mark. With her prey immobilized, the she-wasp drags it back into her burrow or the tarantula’s own den. She lays one fertilized egg on the body, and leaves, sealing the den behind her.

The wasp egg hatches into a larva, burrows a hole in the tarantula’s abdomen, and begins eating the still-living but paralyzed spider from the inside. The larva will consume all non-essential tissues to keep its host alive for as long as possible. This tarantula buffet can often last for several weeks.

After feasting, the larva pupates inside the tarantula’s abdominal cavity. The adult wasp emerges, leaves the burrow, and continues life as a vegetarian, feeding on the flowers of mesquite trees, milkweeds, and western soapberry trees.

Male tarantula hawk wasps sit on top of tall plants and watch for females to fly by. This starts the next reproduction cycle, leading to a pregnant female wasp looking for a fresh tarantula host for her offspring.

The tarantula hawk has no natural predators aside from the occasional roadrunner.

As a solitary insect, the tarantula hawk rarely bothers, let alone stings, humans. However, if you’ve found yourself on the wrong end of this wasp’s stinger, wash the area with antibacterial soap and warm water to reduce the chance of infection. You can apply a cold compress or ice in a futile attempt to minimize the pain.

You’ll likely have to cowboy up, embrace the agony, and hate life for the next five minutes. But hey, it’s a lot better than what happens to the tarantulas!