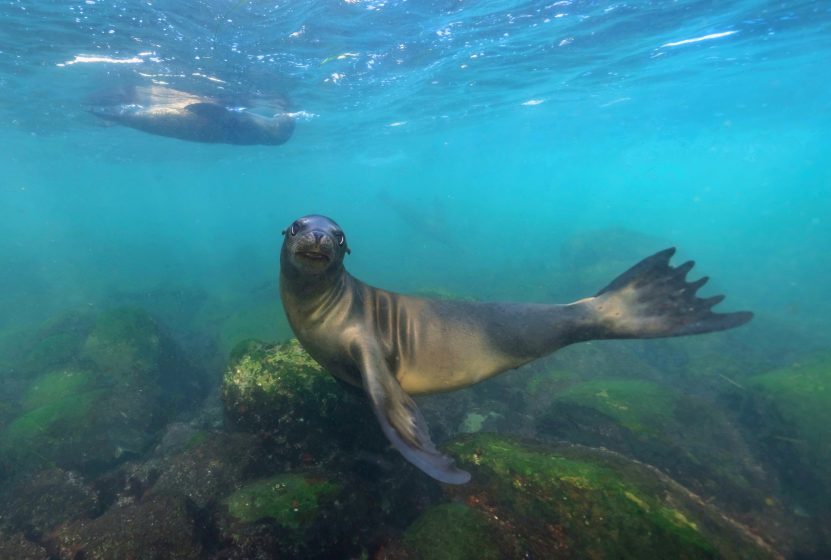 While similar in appearance to seals, sea lions have visible ear flaps. They also have larger front flippers and can curl their back flippers under their body to walk on land on all fours.

Adult male sea lions are typically eight feet long from nose to tail and weigh around 600 pounds. As mating season approaches, some males may bulk up to 1,000 pounds. Adult females average six feet in length with a weight of 220 pounds.

The California sea lion is thought to have evolved from Pujila, an otter-like mammal that lived near freshwater lakes 24 million years ago. Over the millennia, sea lions have adapted to spending more time at sea than on land. Their short limbs have evolved long digits enclosed in cartilage and connective tissue to form flippers for swimming. The back flippers are for steering, and the front flippers are used for propulsion, allowing the sea lion to reach speeds of 25-30 mph underwater and dive as deep as 1,000 feet.

Sea lions also have sensitive whiskers. They are used to communicate with other members of their social group and to identify prey. The whiskers can rotate forward and detect the slight movements of fish swimming nearby. This allows the sea lion to find and capture prey in total darkness.

Unlike seals that rely on thick coats of fur to stay warm, the California sea lion has a single-hair coat that is tan in females and juveniles and dark brown in males. In addition to trapping water next to its skin and warming it to body temperature, the sea lion’s fur offers some protection from the elements. However, its primary defense against heat loss is blubber. The sea lion has a 4-6-inch subcutaneous fat layer that provides highly effective insulation against the cold Pacific waters but can also lead to overheating on land.

To regulate its body temperature on shore, the sea lion protects its body from the sun by flipping sand on its back. It will also use one of its flippers like a radiator and dip it in the ocean to transfer body heat.

While sea lions generally hunt near the shore, females will range between 6 to 62 miles in search of food. Males have been found as far as 280 miles from shore. A sea lion can hold its breath for up to 20 minutes underwater, pursuing its prey, which includes salmon, mackerel, codfish, herring, and squid.

The breeding season lasts from June through early August, with most pups born the following May. Females gather in groups on the onshore rookeries or beaches and generally avoid contact with males until they are ready to mate.

Male sea lions maintain and defend territories during the mating season and often mate with more than one female. On land and in the water male sea lions can be quite territorial towards humans as well.

Females give birth to a single pup and stay with the newborn for several days. After that initial period, females leave their pup for extended periods while feeding.

As social animals, California sea lions have developed a vocabulary ranging from alarm barks to growls and roars. Females even use specific calls to identify their pups. When returning from the ocean, the female will call for her pup, and the youngling will respond with its unique cry.

When left alone, the young pups gather in groups called colonies. The pups rest, explore, and play in tide pools. The pup will stay with its mother, nursing for up to a year, until the arrival of the following year’s offspring.