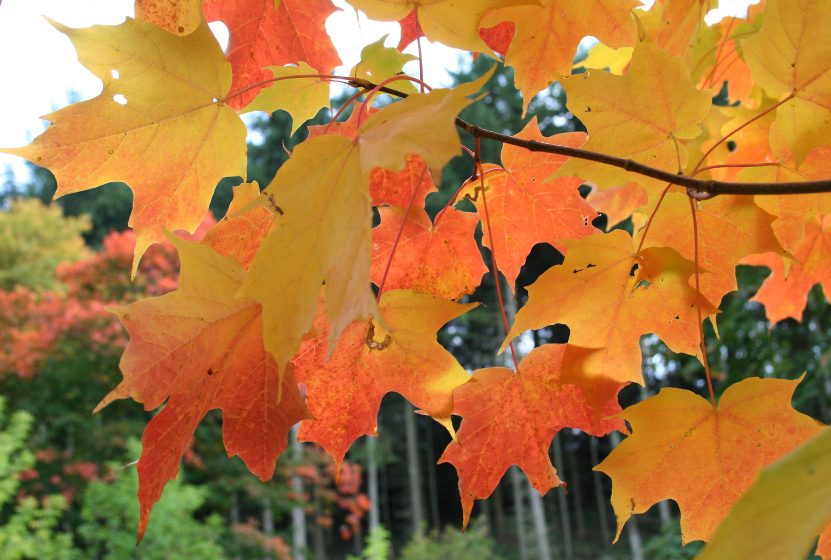 The Sugar Maple (Acer saccharum) is a hardwood tree found in the eastern and midwestern regions of the northern United States and in eastern Canada.

Well known for producing both beautiful fall foliage and delicious maple syrup, the Sugar Maple can live to more than 400 years and reach heights of 115 feet.

Once temperatures drop in late September, the leaves start to change color, ranging from yellow to orange to bright red. Some of the best places to see the fall color shows are Algonquin Park in Ontario, Canada and throughout the Catskills in New York.

Maple’s wood is prized for its hardness and beauty. The honey-colored wood is used for cutting boards, furniture, basketball courts and bowling lanes, as well as guitar necks and a variety of musical instruments in the violin family.

Due to their sturdiness, maples are also outstanding candidates for supporting backyard treehouses.

Foliage, furniture, and fun aside, the Sugar Maple is perhaps best loved for its sap, the source of pure maple syrup.

The art of maple sugaring, converting sap to syrup, was developed by the Algonquian tribes along the Atlantic coast. Traditionally, the process started during the first full moon of March, also known as the Sugar Moon or Maple Moon. This is when the sap begins to flow throughout the tree. Cuts would be made through the bark to allow the sap to run and be collected in birch bark containers.

The sap would then be boiled to evaporate the water and leave behind the sweet, sticky syrup. Nearly 40 gallons of sap are needed to produce one gallon of maple syrup.

In addition to making pancakes and waffles glorious, maple syrup is also used to make maple sugar and taffy candy.

Native American tribes would also dry the Sugar Maple’s inner bark, grinding it into a powder to use as a thickener for bread and soups.

Later in the spring, the tree’s distinctive winged seed pods appear and are collected as an additional food source. They can be eaten either fresh, dried, or boiled.

These “helicopter seeds,” which twirl and hover before falling to the ground, generate a tornado-like vortex as they move through the air. Just like a helicopter blade, the seed’s top leading edge reduces air pressure which creates lift, temporarily opposing gravity. This same bit of hover technology is used by hummingbirds, bats, and insects.

Bonus Treats: Maple taffy on snow is a traditional spring confection from Quebec Ontario Canada and New England. The maple syrup is boiled down to just the right consistency and then poured onto fresh snow to make a yummy treat your dentist will love.