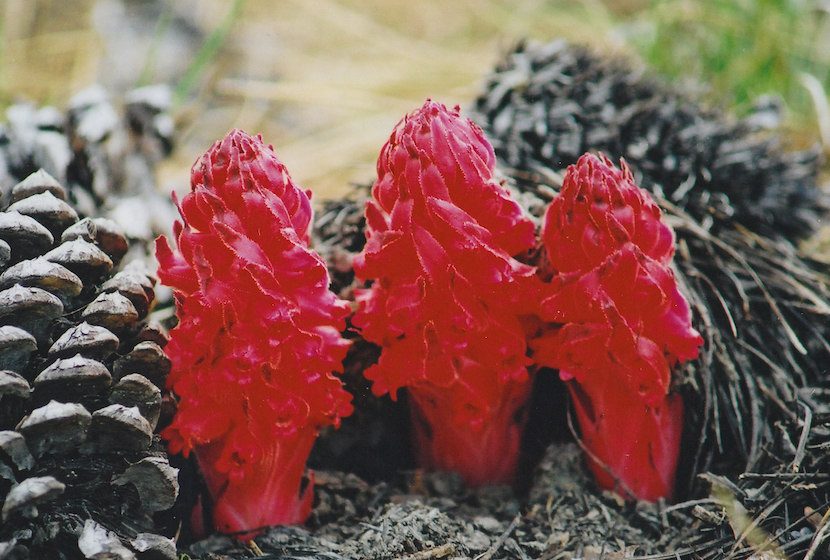 The Snow plant (Sarcodes sanguinea) is a strikingly red parasitic plant that can found in the conifer forests in the Sierra Nevada range in California, Oregon, and some isolated pockets in western Nevada.

The plant’s scientific name, Sarcodes sanguinea, which is loosely translated as “the bloody flesh-like thing,” doesn’t do this beautiful plant justice. Its more familiar names of snow plant or snow flower are better monikers for this eye-popping red plant that makes its appearance in late spring during the snowmelt.

Living in colonies deep in the conifer forest, the snow plant does not need sunlight to survive. The plant feeds on the nutrients from mycorrhizal fungi that are attached to tree roots. This method of sustenance classifies the plant as a parasite.

Conifers, snow plants, and mycorrhizal fungi all have a symbiotic relationship with each other. When it comes to life in the wild, think of symbiotic as the equivalent as a plant potluck party. Every party-goer brings a small dish to share with the others, and everyone gets a complete meal.

In this particular party, the towering conifer brings its access to the sun. The tree shares the products of photosynthesis with the fungus. Through its network, the fungus brings the tree water and minerals.

The snow plant, however, is like the fungi’s couch surfing buddy. He doesn’t contribute a dish to the potluck and mooches from everyone else.

For this reason, the snow plant and your itinerate buddy are scientifically classified as parasites.

Snow plants are typically found in higher elevations between 4,000-9,000 feet in shady areas with thick pine needle carpets. The snow plant will make its appearance in the late spring when its bright red stalk breaks the soil’s surface. The stalk will ultimately grow to about 12 inches in height by late summer.

The snow plant’s leaves are like scales with more leaves concentrated at the bottom of the stalk.

The snow plants flowers have five petals and are tightly packed together. The petal edges are fused together and create the shape of an elongated bell.

The bright red flowers of the snow plant help attract pollinating insects. These helpful insects will shake the downward-pointing flowers to release pollen to the wind, as well as carry pollen to and fro on their legs and bodies.

Once fertilized, the snow plant develops small fruit. Within the fruit are seeds that are eventually dispersed to the ground. The seeds must be covered by leaf litter and be in contact with the underground fungi to germinate.

3 Responses to The Snow Plant