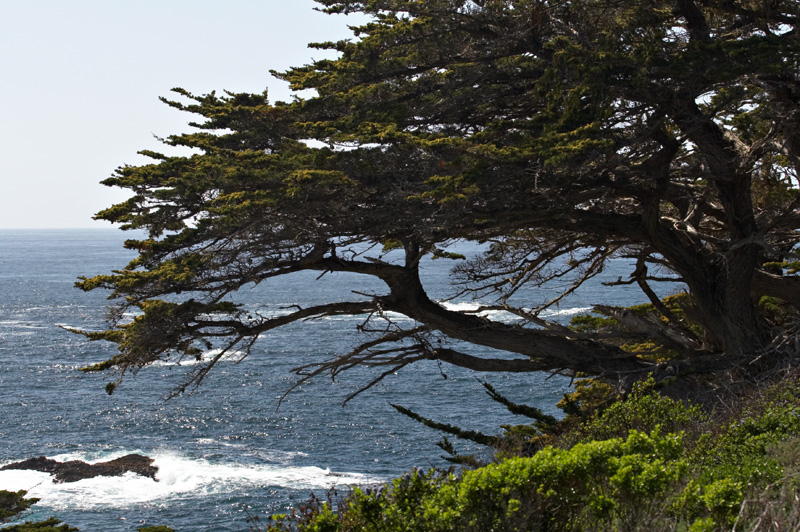 The Monterey Cypress (Cupressus macrocarpa) is native to the Monterey Bay, California area, and has been cultivated throughout the western and southern United States. This cypress has high wind and aerosol salt tolerance, making it the perfect coastal tree.

The Monterey Cypress is found naturally in only two central groves, at Point Lobos and Cypress Point. Here, the trees flourish in cool summers bathed in near-constant sea fog. The Monterey cypress is one of the more significant trees planted to hold the sands in San Francisco’sFrancisco’s Golden Gate Park.

Narrow and pyramid-shaped when young, the cypress spreads with age and can grow up to 90 feet tall. The high coastal winds transform the tree into irregular shapes with flat tops resembling a bonsai tree.

These twisted and varying shapes and textures make them a favorite subject of painters and photographers alike. Probably the most famous is the Lone Cypress that sits on a jagged rock point along the 17 mile drive in Pebble Beach, north of Carmel by the Sea.

The bright green foliage, which has a lemony smell when crushed, has scale-like leaves approximately two inches long.

The Monterey cypress has small yellow flowers in the spring. The fruit can grow up to one inch long and is covered by a dry, hard coating.

The Monterey cypress depends on fire to cause its small round cones to open and disperse the tree’s seeds. Some cones, however, will open under the heat of a hot summer day, and some regeneration will take place in unburned habitat. Unfortunately, fire suppression efforts in Point Lobos and Cypress Point are having a negative impact on the tree’s population by preventing seed dispersal.

The Monterey Cypress was one of the first non-native trees brought to southern California by early settlers in the mid-1800s. The trees rapidly spread and were used as windbreaks. In the hotter and drier climates, however, the trees are susceptible to fungus and beetle attacks.

The coryneum canker fungus enters the tree through insect damage or bark cuts made by pruning equipment. There is no known cure. The infected tree’s foliage will slowly turn brown, leak sap, and die.

That leaking sap, in turn, attracts beetles. The gorging beetles release pheromones that are carried in the wind for miles, attracting more beetles to the tree. The beetles mate before boring through the bark to lay their eggs. Once hatched, the larvae enjoy their cypress feast, carving intricate patterns through the tree’s cambium layer.

The Monterey cypress’ most effective beetle defense is drowning the offending insects in sap. Creating that sap takes a lot of water, which the coastal trees can pull from their environment. Trees in more arid conditions aren’t able to generate enough sap and will often succumb to the beetle damage. As a further defense the Monterey cypress’s foliage is mildly toxic to animals and should teach them a lesson not to nibble on these trees.

The oldest living Monterey cypress is a little over 280 years old, with most trees dying before reaching 100.