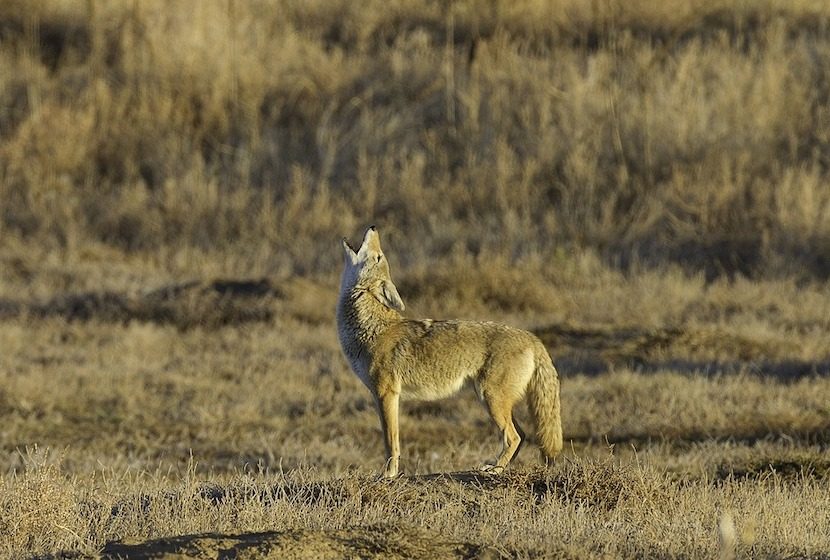 The Coyote (Canis latrans, which translates to “barking dog”) is a member of the dog family native to North America and is a close relative of the gray wolf. Originally from the Great Plains, these resilient animals are now found throughout most of North and Central America and are represented by up to 20 subspecies.

The name coyote comes from the Spanish interpretation of the Aztec word for animal, coyotl.

Coyotes are a significant mythological figure to many Native American tribes. While the animal’s traits and stories vary from tribe to tribe, the most common lore reflects the coyote’s intelligence and portrays the animal as a trickster. Southwestern and Plains tribes also considered the coyote a skin-walker who take the appearance of both man and animal.

Coyotes average 24 inches tall at the shoulder and are approximately four feet in length, from nose to tip of the tail. Desert coyotes average about 20 pounds and those found in mountainous areas can tip the scales close to 50 pounds.

The coyote’s coat is primarily gray and light brown along the muzzle, ears, belly, and legs. The tail and guard hairs are often tipped with black.

Coyotes can run at speeds of up to 40 miles per hour and have the endurance to travel more than 100 miles in one night.

When it comes to diet, coyotes are not finicky. They eat everything from small mammals, birds, insects, fruits, livestock, and garbage. They also have an opportunistic fondness for plump suburban pets.

Coyotes are also notorious campground scavengers and roaming and mooching through national parks. Remember they are wild animals and to never feed them or leave food out for them. You don’t want them coming home with you.

A coyote pack ranges in size from 3-10 animals, although they hunt individually or in pairs. When living near humans, coyotes will be most active at night but will also take advantage of sunrise and sunset hunting and scavenging opportunities. In areas of less human contact, coyotes will hunt throughout the day.

The group yip-howl is the hallmark sound that is used when coyotes reunite in the early pre-dawn hours after a night of solo hunting. As more coyotes join in, the more intense the vocalizations become, often creating the illusion that the pack is much larger than it is.

As far as family life, coyotes maintain pair bonds that last for several years. Their breeding season runs from December through March with a litter of four to six pups born in April and May. Both parents share in raising the offspring during the first year.

At nine months, the young coyotes are close to their adult size and will often move to start a new pack or remain with their own. Approximately 20 percent of the litter will survive the first year with the average lifespan being between six to eight years.

So keep a sharp eye, it is possible to see a coyote in almost any part of the outdoors and if you don’t see them, you may hear their singing at night.