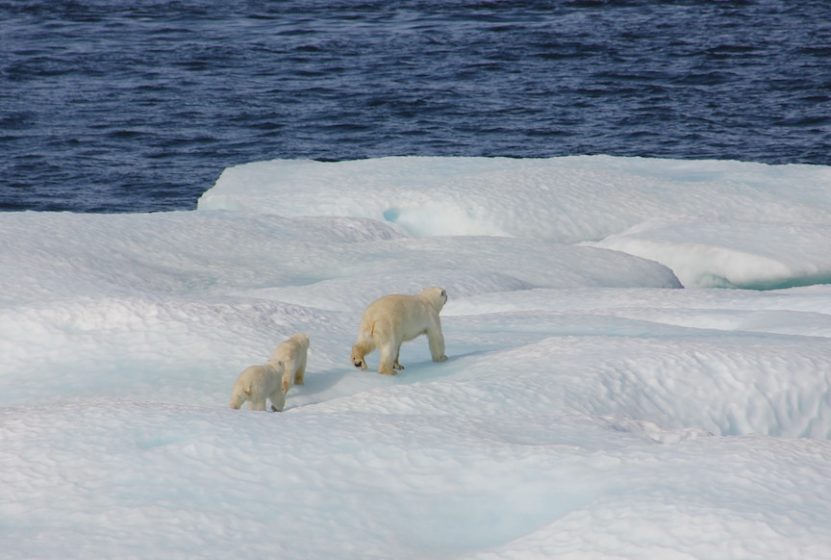 The Polar Bear (Ursus maritimus, which translates to maritime bear) is the apex predator of the Arctic. Spending most of its life on Arctic ocean sea ice, the Polar Bear is the only species of bear to be classified as a marine mammal.

Polar bears can be found in Alaska, Canada, Greenland, Russia, and some northern islands near Norway. They spend most of their time on the sea ice hunting the Arctic buffet which always features seals as the main course. Predominantly, ringed (Pusa hispida) and bearded seals (Erignathus barbatus).

Using its remarkable sense of smell it can detect a seal up to a mile away. (that’s maybe because seals stink!) Ever patient, the Polar Bear waits near a seal breathing hole until it smells the seal’s breath when it comes up for air. On that fateful exhale, the seal is grabbed by the polar bear and yanked up onto the ice, soon to the powerful bear’s fatty and delicious lunch.

From nose to tail, an adult Polar Bear can measure up to eight feet long with males weighing up to 1,700 pounds and females about 1,000 pounds.

Aside from being the perfect seal-eating mammal, the Polar Bear’s body is well-adapted to live in the Arctic extremes where winter temperatures are usually minus 30 degrees Fahrenheit and can dip down to minus 90 degrees Fahrenheit. A four-inch layer of fat helps retain their internal body temperature, and black skin maximizes sunlight absorption.

Two layers of fur help keep the elements out. A shorter, dense, underfur provides insulation, and a longer, hollow outer layer of guard hairs offers additional protection and a bit of optical trickery.

The guard hairs are transparent, not white. When sunlight hits the hair, some light is trapped and bounces around, creating luminescence and giving off more white-colored light.

The Polar Bear is so well adapted for cold temperatures that it can actually start to overheat when temperatures exceed 50 degrees Fahrenheit.

In addition to the polar bear’s thermal superpowers, it is built for traversing ice, snow, and the open ocean. The polar bear’s large paws, acting like snowshoes, distribute its weight over a larger surface area, allowing it to travel on snow around four miles per hour with sprinting bursts up to 25 miles per hour. The foot pads are also covered with small bumps which increase traction on the slick ice.

The paws are also partially webbed to aid in swimming at speeds up to six miles per hour. Polar bears have been tracked on swims that have lasted nearly 10 days and covered more than 400 miles.

Adult Polar Bears live mostly solitary lives but will come together during the mating season in April and May. After the males brawl over breeding rights, the winning couple mates repeatedly for several days.

The female’s fertilized egg stays in a state of suspension during the next four months while the pregnant polar bear eats to the point of nearly doubling her weight.

In September, the female Polar Bear digs a cozy maternity den and will give birth to one-to-two cubs between November and February. The cubs are born blind and weigh approximately two pounds.

Polar Bear females have a life expectancy of 24 years while the males only make it to about 20 years.

For centuries, the polar bear has been a dominant figure in the material, spiritual, and cultural life of Arctic inhabitants. Polar bear remains have been found at hunting sites dating back 3,000 years ago, and many believe that humans acquired their seal hunting and igloo building skills from observing the polar bears.

Some Inuit and Alaska Natives believed polar bears were humans inside their dens and would turn into a bear by putting on a skin when going outside. The Polar Bear’s human-like acts of standing and sitting, in addition to the skinned carcass resembling a human body, led to the belief that the spirits of humans and bears are interchangeable.