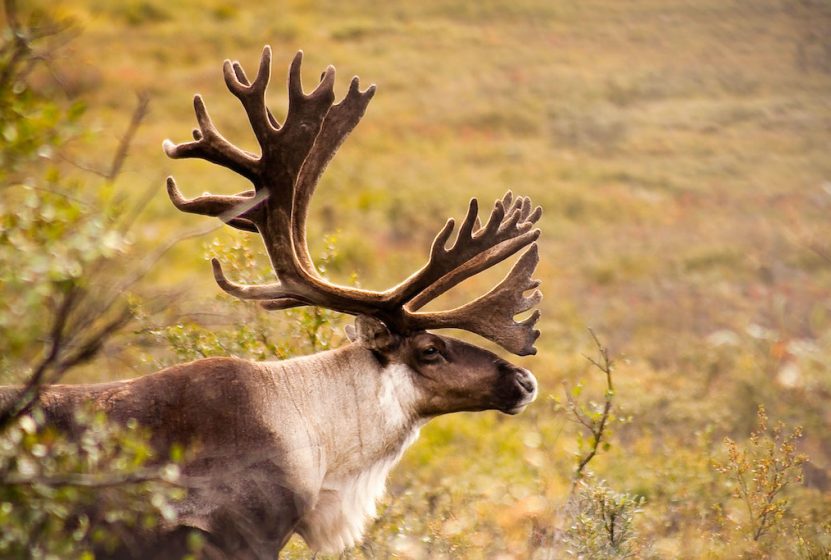 The caribou (Rangifer tarandus) is a large hoofed mammal belonging to the deer family. Depending on where you live, caribou and reindeer are the same animals. Caribou are native to North America while reindeer are native to Asia, Europe, and Santa’s home in the North Pole. There are, however, some reindeer in Alaska that were imported from Siberia in the late 19th century.

In general, caribou are found in the wild, and reindeer are a form of domesticated caribou used for pulling sleds in Scandinavia and Siberia. Reindeer typically have shorter legs and are a bit smaller than their wild relatives.

Caribou can be found in the Arctic, sub-Arctic, tundra, and mountainous regions of North America, Siberia, and northern Europe. Caribou once used to live as far south as Maine and the northern Great Lakes region.

Caribou have dense, dark brown coats of hair with a white neck and flank. They have two layers of fur, a more robust outer coat of hair as well as a soft and wooly undercoat.

During the winter, the caribou’s hair is about three inches long and is hollow inside. This helps trap air and acts as insulation against the extreme cold temperatures. The hollow hair also acts somewhat like a life preserver by increasing the caribou’s buoyancy while crossing water.

Like cows, caribou have four hoofed toes on each foot but only walk on the two larger ones. In deep snow, all four toes spread to increase surface area, performing the same role as a snowshoe. The hooves also have a hard edge, which helps break and clear the snow when digging for food. The animal’s name caribou comes from the Micmac India word “xalibu,” which means “the pawer.”

Caribou make one of the largest and most epic large-animal migrations. Each spring and fall, caribou travel up to 10 to 30 miles per day as they move to their seasonal feeding spots. Herds may cover up to 3,000 miles each year.

As summer nears, caribou head north to their summer grazing grounds to feed on the tundra’s grasses and plants. With the arrival of the first snow in the fall, the caribou turn back south with the females and calves, leaving several weeks before the males.

A herd of caribou on the move often sounds like they’re accompanied by an audience snapping their fingers. This is due to the sound of a tendon in the caribou’s foot as it slips over the underlying bone.

Caribou are also strong swimmers, crossing rivers and lakes during the migration. Their large feet make extremely effective paddles enabling adults water cruising speed of 4 mph and a top speed of 6 mph. Some herds have been seen swimming as far as a mile and a half from island to island.

The caribou mating season starts in October, with one male competing with other males to breed with several females. The female caribou will not reach sexual maturity until she is 2-½ years old.

Once pregnant, gestation will take between 225 to 235 days with a single calf birth taking place in May or June. The newborn caribou weighs between 10-20 pounds and can travel with its mother within an hour of its birth.

The caribou’s highest mortality rate occurs in the calf’s first few months of life and is due to predation. Male caribou will typically live up to eight years of age, and females may reach 10 years.

Caribou are a favorite meal of many predators. Wolves prey on caribou throughout the year but focus their energies on the herd during the winter months. Bears will hunt caribou in the spring, summer, and fall. Golden eagles and lynx can kill calves in the early summer and fall during the caribou’s migration.

Caribou also have a predator alert signal in the form of a scent gland located at the base of their ankles. When the caribou senses danger, it rears up on its hind legs, releasing the scent to warn others in the herd.

Throughout their range, caribou have been a traditional source of food and clothing for indigenous people. The caribou’s flesh and marrow is a primary food source for many cultures. Sinew is often used for thread and hide for clothing. Bows and other tools were made from the caribou’s antlers, while the animal’s fat was used as a fuel source.