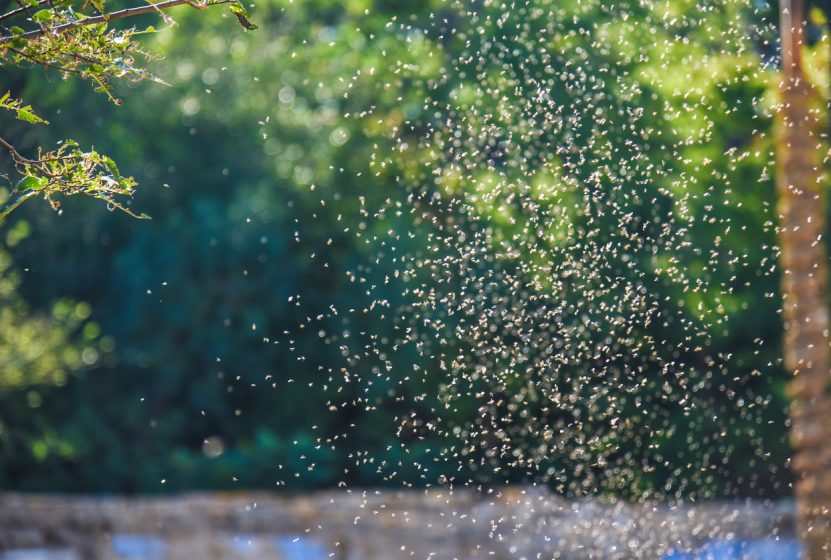 There are approximately 3,500 species of flying syringes, otherwise known as mosquitoes (Aedes), around the world. They can be found from the tropics to the Arctic and Antarctic and can live at elevations as low as 3,000 feet below sea level to 12,000 feet above sea level.

While not all mosquitoes feed on humans, they will feed on other mammals, birds, and reptiles. Some even feed on fish when they expose themselves to air.

Both male and female mosquitoes feed on plant nectar, sap, and honeydew (the sticky substance excreted by aphids). Only females feed on blood. Since blood is chock full of proteins and amino acids, it is the optimal prenatal supplement for growing eggs inside the female’s body.

The mosquito’s “mouth,” or proboscis, is more than just a tiny syringe. It is a perfectly engineered system for blood extraction. Two structures, the mandibles, grab the skin while two other structures, the saw-like maxillae, cut. The maxillae are so small and sharp that people can’t feel the bite. A third structure, the hypopharynx, injects the mosquito’s saliva into the skin opening.

The saliva prevents blood from clotting, lubricates the tubes inserted into the hole, and helps dilate blood vessels. Finally, a fourth structure, the labrum, searches for the blood vessel, pierces it, and forms a straw-like structure through which the mosquito can draw up the blood.

Female mosquitoes can consume an average of 1 to 1.5 times their body weight in blood. While one mosquito only takes between 1 and 10 milligrams of blood per meal, thousands of mosquitoes can remove enough blood to kill an animal. This lovely process is called exsanguination.

During a three-month period along the gulf coast of Texas and Louisiana, after a particularly wet and hot hurricane season that created perfect mosquito breeding conditions, 1,550 cattle deaths were attributed to exsanguination by mosquitoes.

Mosquitos also can harbor several kinds of diseases are spread to humans Zika virus, West Nile virus, Chikungunya virus, dengue, and malaria. So beyond the maddening itch after being a mosquito’s lunch it really is important to takes steps to prevent being bitten in the first place. A Gin and Tonic doesn’t hurt either- the quinine in tonic water helps prevent malaria.

While mosquitoes become more active as temperatures increase, biting rates decrease once temperatures drop below 70 or above 95 degrees Fahrenheit. This explains why mosquitoes are at their temperature sweet spots during dawn and dusk.

Despite many urban myths about mosquitoes preferring some people over others, the primary attractant is your excretory cocktail.

Armed with a hat trick of sensors that rely on vision, smell, and thermal cues, mosquitoes can find you with supernatural precision.

To start the blood hunt, the female mosquito cruises around at about 2 m.p.h searching for higher levels of carbon dioxide in the air. She is armed with nerve cells with specialized receptors that can detect the carbon dioxide from your exhalations as far as 150 feet away.

Using your carbon dioxide plume to guide her toward you, her vision starts to pick you up once she gets within 30 feet.

Getting closer,  she senses your body heat and moisture. Once she is within eight inches of you, she detects more than 100 individual odors, including ammonia, butanol, and lactic acid.

Now that she is bathing in your human perfume, the female mosquito zeroes in on your body heat to pinpoint her landing spot to start the blood-sucking feast.

To minimize the chances of becoming a mosquito buffet while you’re enjoying the outdoors, wear light-colored, long-sleeved shirts, long pants, and socks to cover exposed skin. You should also use an EPA-registered topical repellent.

If DEET as an active ingredient in your repellant, use caution. DEET won’t damage natural fibers like cotton and wool, but it will damage plastics like rayon and spandex. You can also treat your clothes with Permethrin. Used to treat lice and scabies, Permethrin is commonly used on clothes and mosquito nets to kill mosquitoes on contact.

When camping, try and locate your campsite away from standing water. A mosquito only needs a tablespoon of water to lay 50-200 eggs. Within 10 days, those eggs have transformed into hungry adults who have put you as the only item on today’s menu.