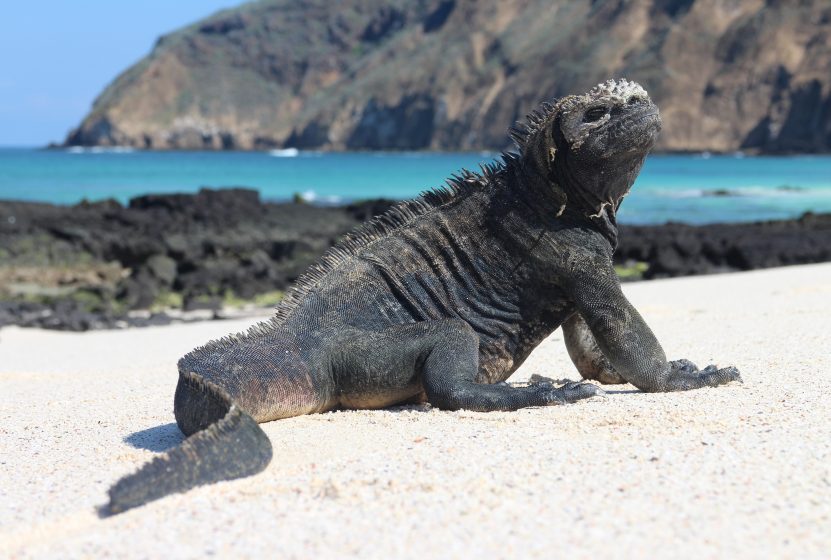 The marine iguana (Amblyrhynchus cristatus) is the only lizard in the world that lives in and around the ocean. This colorful iguana is often seen sunbathing on the sharp volcanic rocks of the Galapagos Archipelago, the exclusive habitat of these nautical reptiles.

Related to mainland iguanas, which are sometimes referred to as “chickens of the trees” by hungry Floridians, the marine iguana diverged into a separate species about 10.5 million years ago.

Since the Galapagos never connected to another landmass, biologists believe the marine iguanas’ ancestors came from South America, floating on driftwood or vegetation carried by ocean currents.

Over the centuries, the separate iguana populations developed alternate appearances, with 11 different subspecies currently recognized. Each subspecies lives on islands scattered throughout Galapagos, and each island’s colony often has different colorings.

Most marine iguanas are usually black or gray which helps absorb more heat from the sun which comes in handy when you are a coldblooded creature and need to warm up.

The Santiago Island iguanas have greener scales, and red and black iguanas live on Santa Cruz Island. Perhaps the most colorful marine iguana is the Christmas iguana in Española. This lizard sports a bright green top, red and black sides, and bright green and black legs.

The marine iguana also developed a shorter snout and razor-sharp teeth that let it get closer to its only food source — marine algae. This mouth adaptation allows the iguana to tear away the algae anchored to the volcanic rock on the ocean floor more easily. The marine iguana also has longer claws, giving it more gripping power to cling to rocks while feeding to avoid being carried away by strong currents.

Thanks to a special pigment in their blood that allows the marine iguana to retain more oxygen, these aquatic reptiles can stay underwater at depths up to 70 feet for more than 30 minutes.

However, as cold-blooded animals, marine iguanas can quickly lose body heat in the cold water. Even though the air temperature is usually around 70 degrees Fahrenheit, the ocean temperature can drop to the low 60s. This is due to the Humboldt Current that brings cold water north from Antarctica to the Galapagos.

To compensate for this heat loss, marine iguanas gather in groups on top of lava rocks for a solar “pre-charge.” Sunbathing and their dark, heat-absorbing skin lets the lizards raise their body temperatures to 96.8 F before entering the ocean to forage.

“Sneezing” is another significant iguana adaptation to its maritime environment. Since these ocean-loving lizards ingest a large amount of saltwater while feeding, they must prevent dehydration by expelling the salt from their bodies without losing water. To accomplish this, the marine iguana has a gland in each nostril that excretes excess salt. This salt is then blown out of the nose hole as a spray.

Between bouts of sunbathing, swimming, eating, and sneezing, the marine iguana finds time to make more iguanas during the January through April breeding season. Each winter, males begin to build a “harem” of females within each male’s territory.

Once mating has concluded, the females leave and dig a 10-30-inch burrow in the sand or volcanic ash. There, they deposit between 10 and 30 eggs. Once the eggs are laid, the female guards her burrow for several days before leaving the eggs to complete their 95-day incubation.

While some predators, like hawks, owls, snakes, and crabs, do eat the eggs and young iguanas, the lizard’s biggest threat comes from non-native species. Feral pigs, dogs, cats, and rats prey on females and their eggs during the nesting period. They have even destroyed the population of land iguanas (Conolophus subcristatus) on Santiago Island.

With approximately 250,000 marine iguanas alive today, this reptile is currently listed as Vulnerable on the IUCN Red List of Threatened Species. Some subpopulations are also listed as Endangered due to predation from non-native animals.