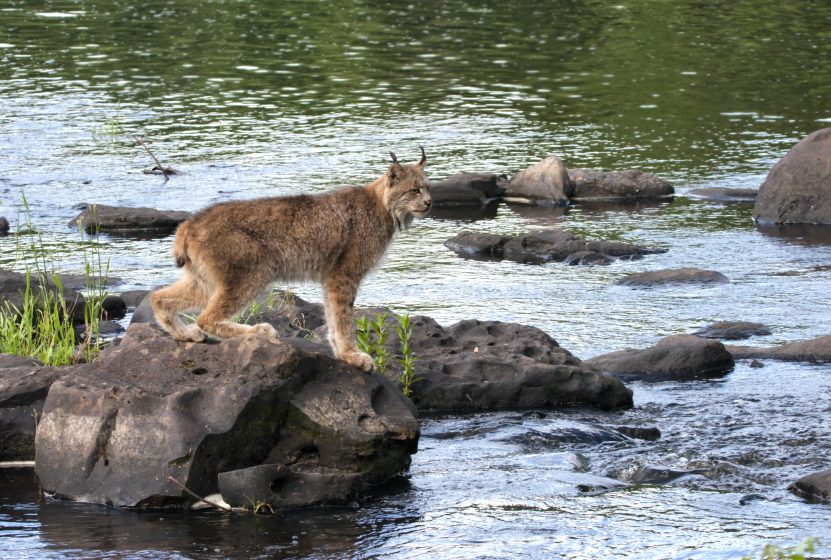 The Canada lynx (Lynx canadensis) is a cold-weather cat perfectly adapted for thriving in the harsh snow-packed terrain of North America.

Slightly larger than the well-fed house cat, the Canada lynx is about 20 inches tall at the shoulder and weighs around 20 pounds. The lynx’s thick fur is light or gray-brown with black spots. The oversized ears feature long black tufts at the end, and its short tail also has a black tip at the end.

The Canada lynx has long legs with the back limbs longer than the front. This feline sports large, heavily furred paws that can spread as wide as four inches in diameter to act as a snowshoe. This allows the Canada lynx to support nearly twice as much weight as its relative, the bobcat.

This foot adaptation enables the Canada lynx to successfully purse another snowshoe-footed animal, the snowshoe hare (Lepus americanus). Since the hare comprises up to 97 percent of the lynx’s diet, the cat is considered a specialist predator.

The Canada lynx is a solitary hunter with a home range between five and 250 square miles. The range sizes vary based on age, sex, prey density, and population density.

The Canada lynx is primarily a visual predator that typically hunts at night along edges in areas of dense cover. These felines are so well adapted to nocturnal hunting that they can spot prey in the darkness from more than 200 feet away.

The lynx typically waits in an “ambush bed” near snowshoe hare trails. Once the hare is within range, the cat pounces, killing the hare by biting its head, throat, or back of the neck.

If the prey is not eaten immediately, the lynx will cache the carcass in the snow and return to eat it over the next several days.

Both the Canada Lynx and the snowshoe hare have such a close relationship that their populations cycle together. The hare population has a 10-year cycle that alternates between scarcity and abundance. Canada lynx populations follow a similar pattern but are one or two years behind the hare populations.

Research in Alberta revealed that during a snowshoe hare population low, lynx reproduction dropped by 38 percent, and kitten mortality jumped to 95 percent.

The cat will stalk its prey or lie in wait in a tree to ambush prey as it passes by underneath.

Female lynx and their young sometimes work together to hunt hares by forming a line as they move through open areas. Prey startled into running by one cat will be caught by another in the line.

The Canada Lynx’s mating season takes place in February and March. During this time, the male follows the female. The cat’s gestation period is 62 to 74 days, and the female will give birth to one to six kittens in a den of thick brush, under stumps, or in hollow trees. Only the female raises the young.

The young lynx are fully weaned at 12 weeks but are introduced to meat around four weeks old.

The kittens will stay with their mother for up to 12 months before establishing their own territories.

In the wild, Canada lynx can live up to 14 years, with some animals living up to 26 years in captivity.

In March 2000, the U.S. Fish and Wildlife Service listed the Canada lynx as Threatened under the Endangered Species Act.