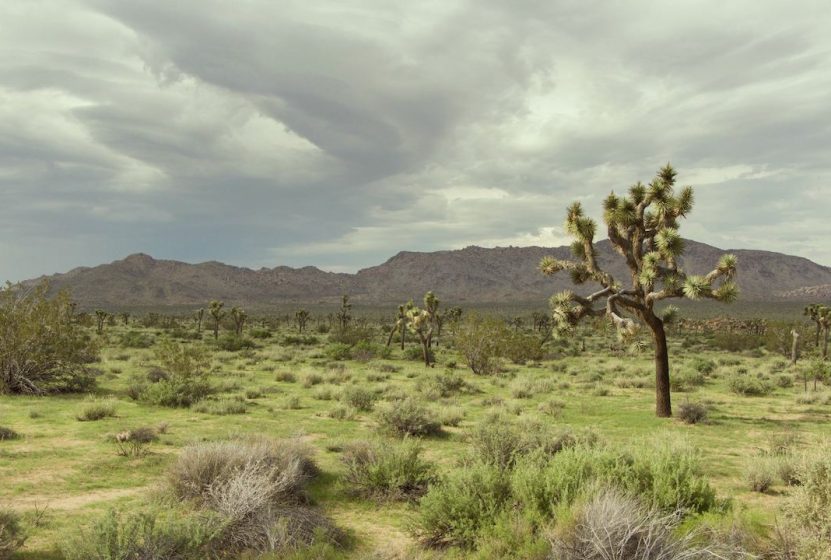 The Joshua tree (Yucca brevifolia) is the largest member of the yucca family and remains one of the iconic plants of the American Southwest. Limited in range to a small geographic area and relying on one insect for pollination, the Joshua tree is considered the indicator plant when it comes to gauging the health of the Mojave Desert, the driest desert in North America.

The Joshua tree owes its current name to Mormon settlers who thought the tree’s shape mimicked the upraised arms of the Old Testament prophet Joshua, pointing the way to the promised land.

The Joshua tree lives at elevations between 2,000 and 6,000 feet and can sometimes be used as a navigation aid if you are familiar with the region. For example, Joshua trees in the Spring Mountains of Nevada live exclusively between 4,000-5,000 feet.

Although there are Joshua trees scattered throughout the Southwest, the most famous and largest concentration can be found at Joshua Tree National Park near Palm Desert, California.

Living in arid conditions restricts the Joshua tree’s growth to two to three inches per year with heights ranging from 15-70 feet and a diameter of one to three feet.

Since the Joshua tree does not have annual rings, determining the plant’s age is difficult. The tree’s shape, however, is used to provide an approximate age range with juvenile trees having no branches, middle-aged trees having a fork, and older trees having a single stem and open crown. Due to their slow growth rate of two to three inches per year, the Joshua tree can take nearly 60 years to mature but will have a lifespan of up to 150 years.

Scientists attribute the now extinct giant ground sloth as the original disperser of Joshua tree seeds 10,000 years ago. The bear-sized sloth ate the Joshua tree fruit and deposited the seeds in its scat. Today, that poo dispersal job has been taken over by small rodents who don’t travel far, continuing to limit the Joshua’s tree’s range.

For the Joshua tree to have seeds, however, it still has to be pollinated. Unlike other flowering plants, the Joshua tree only has one way to transfer pollen: the female yucca moth (Tegeticula yuccasella).

The Joshua tree’s bell-shaped blooms give off a smell that has been described as anything from blue cheese to rotten fruit. While humans may not appreciate the smell, the odor is like million-dollar perfume to the female yucca moth.

This small white moth and the Joshua tree are truly BFF. One cannot survive without the other. When the Joshua tree’s flowers bloom in the spring, the yucca moth collects the pollen during the night. The female forms the pollen into a compact ball that is three times the size of her head and carries it under her moth equivalent of a chin. After she lays her eggs in the flower, she deposits a small amount of her pollen, fertilizing the Joshua tree flower.

By the time the yucca moth eggs hatch, the fertilized flowers have produced seeds and fruit for the larvae to eat. As the larvae mature, they leave the fruit and drop to the ground, burrowing up to three inches, and creating a cocoon until the cycle repeats one year, or several years later.

Other animals also benefit from Joshua trees. Approximately 25 bird species use the trees for nesting and cover, and small mammals eat the seeds and fruit.

Indigenous tribes utilized nearly every part of the Joshua tree. The tree’s fiber was used for making nets and sandals while the roots were used for baskets and dyes. Branches were fashioned into quail traps. While the Joshua tree’s flowers may not smell great, they are edible and were roasted and eaten like candy, or dried and used in cooking.