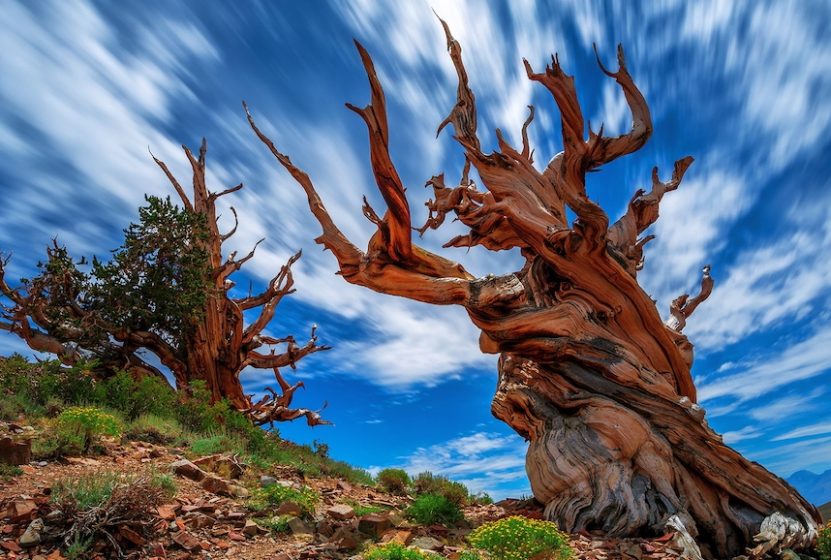 The twisted features, well-weathered bark, and stunted height of the bristlecone pine (Pinus longaeva) give you the sense that this tree has made more than its share of trips around the sun. Bristlecone pines are some of the oldest living trees in the world with a few Inyo National Forest having already been around for 3,500 years by the time Columbus sailed across the Atlantic to the New World.

Sprinkled in small stands throughout Nevada, California, and Utah, the bristlecone pine lives in elevations between 9,500 to 11,000 feet.

The twisted trunk can vary in diameter from 8 to 12 feet. Due to the high elevation and arid conditions, the bristlecone pine will typically not exceed 30 feet in height, although some can top out near 60 feet in lower elevations with more available water.

One of the causes of the bristlecone pine’s twisted appearance is due to it being a mix of dead and alive. The tree dies in sections. When the roots become exposed to the harsh environment, they dry out and die. The parts of the tree connected to that root will soon die while other parts of the tree live, causing the tree to grow in some pretty gnarly ways.

The bristlecone pine gets its name from the prickly bristle that forms on the tree’s immature cones. Once the cones reach maturity at 2 to 4 inches long, they are pollinated by the wind and other nearby trees. After fertilization, the seeds are released and carried by the wind with the help of the seed’s wing-like sheath.

One of the oldest bristlecone pine groves is located in eastern California’s White Mountains. This area is home to the 4,850 year-old Methuselah tree as well as another 5,069-year-old tree. Both trees, whose locations are kept hidden, are considered the oldest non-cloning organisms on Earth (the trees don’t reproduce through cloning, so their roots are as ancient as their trunks).

Wheeler Peak in Nevada is home to several trees more than 3,000 years old, including the Prometheus tree. This tree, which was estimated to be just under 5,000 years old, was cut down by graduate student Donald Currey in 1964 as part of his field research.

The controversy that followed the cutting down of this ancient tree played a part in protecting the bristlecones and ultimately led to the area being designated as Great Basin National Park. Currey became one of the staunchest advocates for protecting the tree and making the area a national park.

Due to its long lifespan, the bristlecone pine is a favorite research tool for dendrochronologists. These scientists a tree’s annual growth rings to date events and environmental changes.

For example, comparing a bristlecone pine’s outer growth rings to a living tree’s inner rings can be used to determine a chronology of events. If scientists can match a pattern of individual ring widths in both samples, they can backtrack to dates further into the past. Using this technique of matching overlapping patterns, bristlecone chronologies have been established nearly 9,000 years into the past.

Unlike other pine trees which shed their needles every few years, the bristlecone pine’s needles stay on the limb for approximately 40 years. By keeping its needles for four decades, the bristlecone doesn’t lose all of its foliage and can continue photosynthesis year-round. This unique adaptation to high altitude living allows the tree to keep producing energy during periods where there is no thaw.

Another interesting note about the long periods between needle sheds is that the bristlecone may be far older than its tree rings indicate. With the growth of new needles comes the addition of a new cambium ring. This growth ring is typically equivalent to one growing season. If the bristlecone doesn’t shed its needles and grow new ones in a particular year, no new cambium ring is added to the trunk. A tree that is 600 years old according to its growth rings may actually be 800-900 years old.

The bristlecone’s longevity is not due to the Mediterranean Diet or drinking a glass of red wine a day. Unless you count its resin as wine. The tree’s wood is highly resinous, and this helps keep it from drying out in a hot and arid environment. The resin also acts as a barrier to keep insects and bacteria from working their way into the tree’s sensitive interior layers.

There is not much of a record of early Native Americans using the tree for food or construction. This is most likely due to more easily accessible flora at lower elevations. The Shoshone, however, reported treated sores and boiled with the heated pitch (resin). Pine pitch is considered to be an extremely effective antibacterial and anti-inflammatory substance.

The next time you’re hiking and come across a stand of stubby and twisted bristlecone pines, respect your elders. The trees you’re looking at were probably already 500 years old when Cleopatra was winking at Mark Antony and over 1,500 years old when Gutenberg invented the printing press.

Bristlecone pines are protected on federal lands so please don’t use them for firewood or carve your true love’s initials in the trunk.

One Response to The Bristlecone Pine