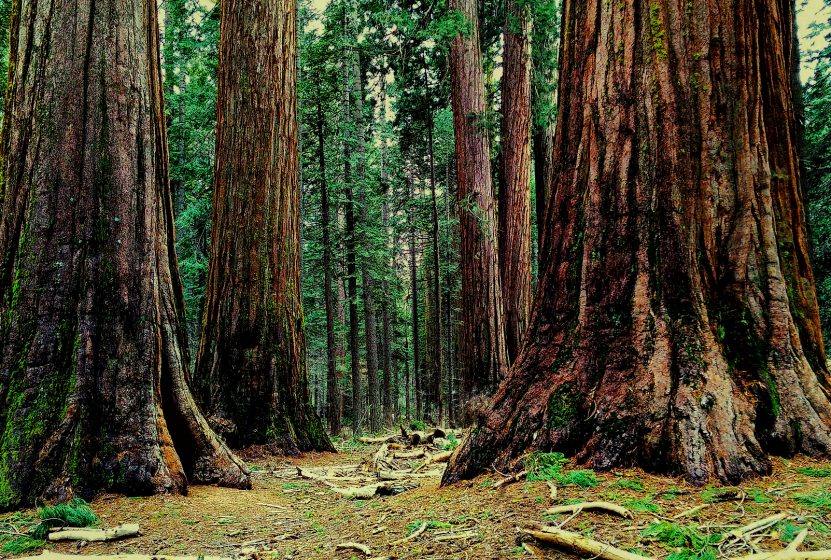 In a world where old-growth forests have mostly disappeared, the giant sequoia (Sequoiadendron giganteum) stands strong as the Earth’s most massive tree.

Found in about 73 groves along the rugged western slope of the Sierra Nevada mountain range at elevations between 3,000-8,500, the giant sequoia isn’t easy to miss. The tallest of these coniferous evergreen trees towers more than 316 high, and the widest has a diameter of over 31 feet.

The largest giant sequoia is the General Sherman tree. Located in Sequoia National Park, this tree’s base has a circumference of 102 feet, is 272 feet tall, and has an estimated weight of 6,167 tons.

Also known as the Sierra redwood, the giant sequoia gets to be so large due to its rapid growth rate and epic longevity. The oldest known giant sequoia is approximately 3,300 years old.

Given the right growing conditions, the giant sequoia adds about two feet each year. During the first two years of growth, most of the tree’s development occurs underground. The root system branches out laterally just beneath the soil surface. Eventually, the roots of larger trees may reach out more than 200 feet from the trunk, making the sequoia’s area of influence encompass nearly four square acres.

The sheer size of a giant sequoia also contributes to its longevity. The tree is too massive to be taken down by the wind. The reddish-orange bark is up to 18 inches thick and full of tannins that protect the giant from fire and insect damage.

Wildfires in Sequoia National Park and surrounding forests tore through more than a third of the giant sequoia groves in 2021. Fires in the same area in 2020 killed a record-setting 7,500-10,400 of the 75,000 sequoias.

During the 2020 Castle and SQF Complex fires, fire retardant gels were dropped on sequoia tree canopies, and sprinklers were used to keep trunks wet. The General Sherman tree was even wrapped in a foil blanket to protect it from the fire and heat.

Ironically, the giant sequoia relies on wildfires to propagate the species. Fires clear undergrowth and smaller trees that compete for the sunlight young sequoias need. The heat also prepares the soil for seed germination.

Giant sequoia cones require two growing seasons to mature and rely on the hot air from a wildfire to dry out the cones. The cones can stay closed for up to 20 years without fires.

Once dried, the cones open and start dropping seeds onto the bare, fire-swept soil within two weeks. The seeds cannot germinate unless they are on the mineral-heavy ground created by a fire.

Although the giant sequoia dates back 200 million years to the Jurassic period, the tree didn’t capture America’s attention until 1852 when a hunter named Augustus Dowd came across a sequoia while chasing a wounded grizzly bear.

Newspapers called the trees the “Vegetable Monster,” and big tree mania set in. Dowd’s tree was cut down, and its pieces went on tour in New York City and San Francisco. By 1855, a hotel was built in the sequoia grove, and promoters cut a tunnel in the base of one tree to charge for carriage rides through it.

Loggers started harvesting the giant sequoia only to find that the wood was too brittle for commercial use. Fortunately, Sequoia National Park was created on September 25, 1890, as America’s second national park, and the first national park formed to protect a living organism, the giant sequoia.

U.S. Army Cavalry troops were assigned to protect the new park through 1913, including the first African American military superintendent, Col. Charles Young. Under Young’s leadership, the first road into the sequoia grove was completed in 1903.

With less than 75,000 trees remaining, the giant sequoia is currently listed as an endangered species by the IUCN.