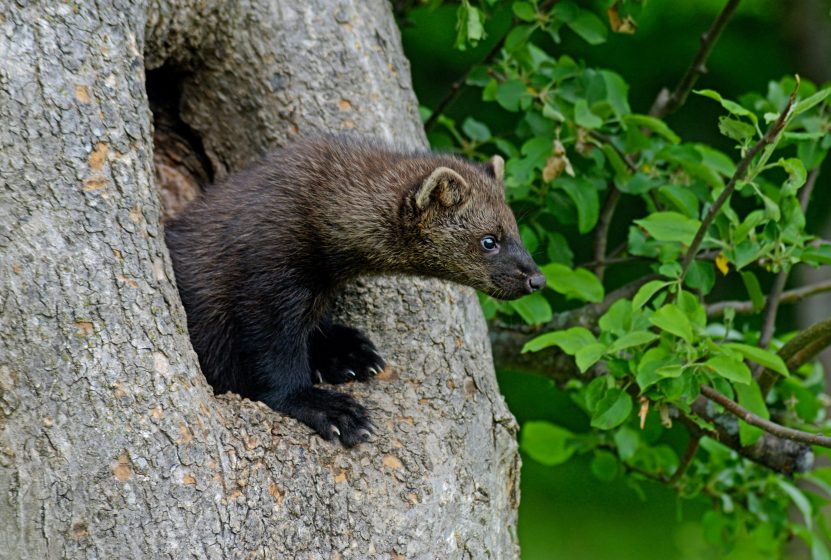 Solitary predators, fishers can be found in old-growth forests with dense canopy cover throughout the northern United States and most of Canada.

An average male fisher weighs between 9-12 pounds, and its long, slender body is 38-48 inches from nose to the tip of its thick tail. It has a short muzzle and small round ears. Female fishers are typically 30 percent smaller than males.

Depending on the season, the fisher has dark brown to light brown fur. The fur darkens during the winter and fades to a mottled brown during the summer.

The fisher has five toes on each foot with retractable claws. Coarse hairs grow between the pads and toes on the hind paws to increase traction when walking on ice and snow. The fisher also has highly mobile ankle joints that allow it to rotate its rear paws nearly 180 degrees. This extreme flexibility — also found in squirrels — makes the fisher one of the few mammals with the superpower of descending trees head-first.

Each hind paw has a circular patch of hair on the central pad where the plantar gland is located. This gland secretes a distinctive odor that creates a scent trail to allow fishers to find each other during the spring mating season.

They are also one of the few carnivores that dine on porcupines. Fishers kill porcupines by repeatedly biting them on the face until the animal dies. This onslaught of biting can last up to 30 minutes before the porcupine succumbs to its injuries.

Controlling the porcupine population actually helps the forest grow since these spikey critters love to eat the tender shoots and stems of new tree growth.

The fisher has a year-long reproductive cycle, with the female reaching maturity at 12 months old. Mating occurs in late March and early April, but the blastocyst — the early structure that develops into an embryo — is not implanted in the uterus until mid-February of the following year. For reference, human blastocyst formation begins five days after fertilization, while the fisher’s blastocyst forms 10 months after fertilization.

Once the blastocyst forms, the fisher’s active pregnancy begins with a 50-day gestation and ends with the birthing of a litter of 3-4 kits in the spring. Young are cared for and nursed by the mother in a hollow tree den. They feed exclusively on their mother’s milk for the first 8-10 weeks and then switch to a solid diet.

After four months, the kits become increasingly intolerant of their littermates, and their mother kicks them out of the den at five months.

By 12 months, the juvenile fishers will have established their own ranges that they will maintain for their 7-year lifespan.

The fisher has a hunting range of approximately three square miles in the summer and up to five square miles in the winter. Males and females will have overlapping territories, but not males. Some Fishers on the search for food have been tracked traveling up to twenty miles in a day.

Aside from humans, adult fishers have few predators. Juveniles, however,  are hunted by bears, coyotes, eagles, wolverines, mountain lions, bobcats, and Canada Lynx.

Adult fishers are sometimes preyed on by bobcats and Canada lynx, but the tables are usually turned where the hunter becomes the hunted. Researchers have documented fishers killing and eating lynx bedded down in snowstorms. The fisher attacks the sleeping cat and quickly ends the melee with a  grip bite on the neck. One study of Canada lynx from 1999-2011 in northern Main found that predation was the leading source of lynx mortality, with 77.8 percent of those deaths caused by fishers.

Eighteenth-century fur traders trapped fishers for their dense, soft pelts, which were used to make scarves and coat collars for the wealthy. These early trappers called the animal fiche or fichet, which is French for polecat. Even though the fisher is not a cat, the name stuck

In southern parts of their range, fisher pelts almost led to the animal’s extinction between 1900 and 1940. Fortunately, closed trapping season, animal repopulation efforts,  and habitat recovery initiatives have restored fishers to most of their original range.