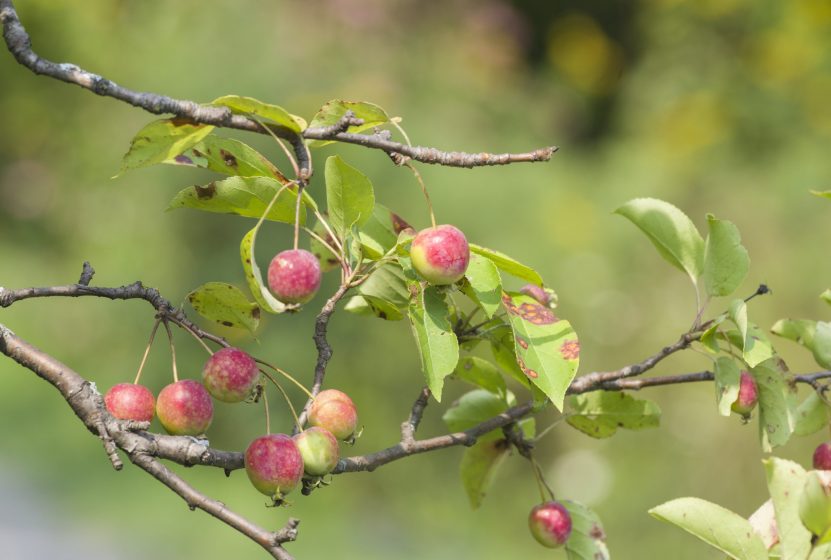 The crabapple (Malus x.) is a deciduous fruit tree found in temperate regions throughout the northern hemisphere. While boys have used the tree’s small, hard fruit as projectiles for centuries, the crabapple also has a rich history of providing tart treats, medicinal elixirs, and has led to the development of the modern apple.

The crabapple tree is a member of the rose family that can grow to 30 feet tall with a compact and drooping canopy. The tree has small green leaves with serrated edges and will sometimes display a bronze tint in the summer. The leaves are arranged in a pinnate manner, meaning leaflets are in pairs on each side of the stem.

The crabapple’s bark is grayish-brown and has a smooth texture that becomes scaly with vertical cracks as the tree matures.

The crabapple flowers in April and May with white, pink, or red petals. Like other fruit- and nut-bearing trees, the crabapple alternates between years of heavy flowering and fruiting with years of decreased production.

When fully developed, the crabapple fruit is similar in size to a cherry and is between ¼ and ¾ inches in diameter. The fruit matures in September and ranges in color from yellow to red. Crabapples will often stay on the tree through December.

A crabapple is ripe enough to eat the fruit is somewhat soft, and the seeds are brown instead of green or white.

Since the crabapple fruit has an extremely sharp, tart taste, it is typically not eaten raw by humans. However, deer, squirrels, and birds are fond of the fruit. The crabapples are best suited for making jellies, preserves, pies, vinegar, and adding a little bite to cider made with modern domestic apples.

Like other members of the apple family, the crabapple seed contains a toxic compound that can turn to cyanide when ingested. Caution is warranted if you decide to brave the pucker and eat handfuls of crabapples.

Crabapples also have high concentrations of malic and tartaric acids. These acids give the fruit its sour flavor and contribute to the crabapple’s use for relieving symptoms of indigestion, gout, and constipation. The fruit has been used to treat parasitic worms, reduce fever, and induce sleep.

Botanists have traced the crabapple to its origins in Kazakhstan in Central Asia. Treasured for its medicinal and decorative features, the tree eventually found its way to Rome via the Silk Road, an ancient trade route that connected China to the Mediterranean Sea.

The crabapple eventually spread throughout Europe and was introduced to North America in the 1700s. The crabapple was commonly planted between apple trees to improve cross-pollination and is still used for that same role in orchards today.

Crabapples are self-sterile. They have to rely on insect and bird pollinators to transport their pollen. Over the last few centuries, those cross-pollination abilities and hybridization have led to the creation of more than 800 crabapple varieties. As a result, a distinct species within the genus cannot be identified — which is why there is an “x” in the tree’s scientific name.

While no one seems to be able to pinpoint how this beautiful tree with the tiny tart fruit earned its name. The most likely derivation appears to come from the Swedish word “skrabba,” which means fruit of the wild apple tree.