Preparing your K9 for summer activities and summer surprises. 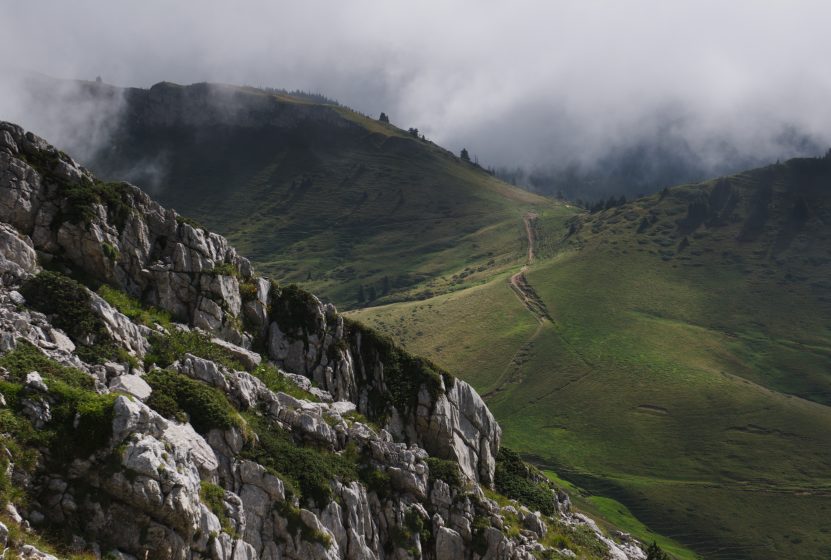 It is a philosophy ingrained in many outdoorsmen and used by organizations and groups like the Boy Scouts of America, Appalachian Mountain Club and military units operating behind enemy lines. The idea sounds simple, leave no evidence of using the landscape and preserve the resources in their natural state.

If we value the resources we enjoy recreating in, there is no reason to disagree with this respectful approach. This philosophy holds true in many circles but there are times when it is alright to let others know you came before them. As you’ll read, sometimes it is proper etiquette to leave a trace to improve the wilderness experience of those who follow you. Sometimes, it might save a life.

Back in 2013, I traveled to Sweden with a good friend and we embarked on an epic cross-country trip through the country in search of meatballs, scandi-ground blades and bushcraft adventure. We rented a car and because of the “right to access” laws, we were allowed to camp anywhere we wanted on our journey as long as we left it the way we found it and didn’t stay in any particular spot for more than two nights.  We were in awe of the land and we found the idea of working with Swedish bushcraft gear in Sweden pretty novel.

While searching around for a campsite one night on our trip within the Arctic Circle, we stumbled upon an incredible campsite near a lake just outside of Jokkmokk. Even though there is near 24 hours of daylight in the summer, it was late enough when we needed to set up camp, search for wood, cook our dinners and settle in for the nights. The sounds of wolves in the distance added to our elevated excitement and growing realization we wanted a good fire right then and there. 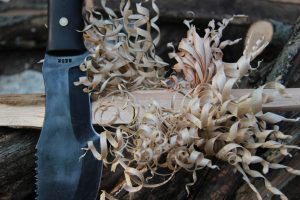 That night in Jokkmokk, we fell into our usual routine of finding large fuel and then processing small fuel into kindling and tinder in the form of fuzz sticks. No sooner did I create my first curled feather stick did John point out a stash of wood left behind by the last camper and most importantly a few fuzz-sticks pre-made and tucked inside the pile of wood to prevent moisture from sinking into the delicate ribbons.

With a spark from my ferro rod, we had our fire and were spared some time to reflect on the bushcraft etiquette we both read about but just experienced, first hand. The next morning, before we left, I paid it forward by splitting some birch rounds and leaving a few fuzz sticks in the same manner I found the ones I used the night before.

You see, there is a time when leaving signs of your presence is welcomed. In Sweden, this manifests itself in the practice of travelers leaving fuzz sticks behind for the next camper to utilize. A similar practice found across the pond in hunting cabins by leaving a couple matches sticking out of a matchbox.

These matches readily accessible on top of a wood stove along with a healthy bundle of softwood twigs inside could be a game changer to a cold passerby. In both circumstances, the idea is to think of the next person using the shelter or area. Assuming the next person is injured, your actions may save their life when they can’t procure or prepare a fire in their weakened state. It’s for this reason, on many trips, I leave fuzz sticks behind wherever I camp. 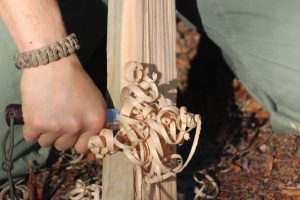 Another common practice that casts aside “leave no trace” values is found on the Appalachian Trail and similar long hikes. Many hikers will leave behind spare parts, extra fuel and other trail goodness in shelters as a way of paying it forward to the next hiker. Assuming a certain stretch of trail is covered and an excess of equipment is leftover, one might choose to leave a spare freeze-dried food behind or hank of paracord or new/unused socks. Of course, this type of charity is not without its share of people using hiker recycle boxes as a dumping ground for gear no one would want to claim. In theory, whatever is left should be serviceable, clean and free of funk.

Bushcraft and other outdoor pursuits bring together some incredibly good-hearted people. The camaraderie built around a fire is rivaled only by that created by sharing an adverse experience.  It is easy to get wrapped up in the nature we surround ourselves with but we should never lose sight of our own safety and survival or that of the next person.

When all the chores are done for the day, it is good knife practice to feather sticks around the fire and see how well you can control your edge. It passes the time when conversations go quiet and leaves a positive trace for the next traveler to take advantage of in a time of need. 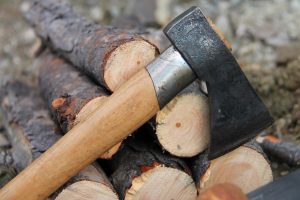