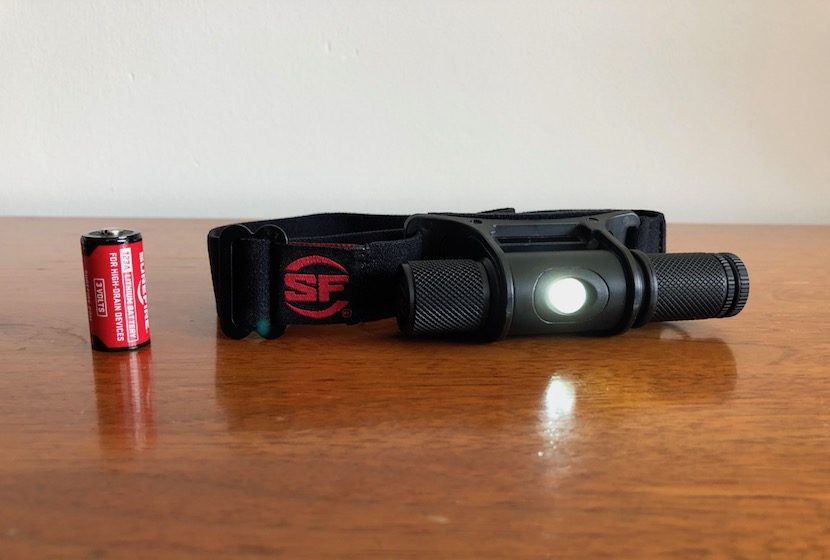 I have owned almost a dozen headlamps in my time. One “walked off” after a nighttime rescue, all the rest failed in some way or another. I don’t think that will ever be a problem with the SureFire Minimus. Contructed from aircraft aluminum that has been hard anodized. That means it won’t crack or otherwise fail if it gets dropped or buried under other gear in your pack. For further protection the lens is recessed providing more protection for the LED inside. Another protection against Murphy’s law the battery cover has a retention strap to prevent loss.

In addition to a bomb proof light housing, the light’s bracket is made of a sturdy polymer frame that won’t crack or break. That is the Achilles heal of many otherwise good headlamps- one small piece of plastic can ruin the entire light. The bracket also allows the light to be rotated up or down for further comfortable focusing on the task at hand. The rubber O-rings of the Minimus ensure it will work in a downpour or after accidental submersion.

So it’s strong, what about performance?

The Minimus excels at what it’s made for, which is providing you with enough light to see and perform tasks in near and middle distance. Though its top setting is 300 lumens, spotting objects beyond 20-30 yards is really the domain of a handheld flashlight with a focused beam and higher lumens. Speaking of the beam, this headlight provides a very nice and even flood with out the usual hot spot in the center. This makes reading using the lowest setting very comfortable without light reflecting harshly back at you. With other headlights I’ve experienced a bright bulls eye in the center of the page that quickly dropped off requiring you to move your head as you read down the page.

Dialing in the correct setting is very easy with the Minimus. It has 13 light settings from 5 to 300 lumens. Unlike other headlamps that require you to keep pushing a button to toggle through setting and if you miss one repeat the whole sequence the minimum works just like a dimmer switch. Rotate it up to go brighter, down for lower. This is part of the Minimus’ great ergonomics that can be easily used with gloves on. Simply click the end cap to turn on and then rotate the knurled knob up or down for the desired brightness.

There is also a SOS setting that actually flashes the Morse code for SOS. Just push and hold the on/ off button for four seconds. Click again to turn off. The headlamp also has a snap on red lens If you want to maintain night vision or further tamp down the lowest light setting.

Another feature of the headlamp that made it a no brainer for me is that it takes the same batteries as all my other SureFire lights. This standardization means I only need to keep one kind of spares in my pack. With a standard sized Thyrm storage case, I can securely carry three CR123 batteries which is enough to resupply the Minimus and my Fury handheld light. This to me is the perfect combination for having hands free close in illumination and a handheld light with plenty of reach.

I really like this light, it is robust, easy to use, has great features and is made by a company that stands by their product. Barring loss, I think it will be the last headlight I buy for a very long time.

Minimus by the Numbers. 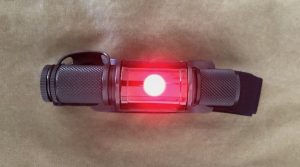