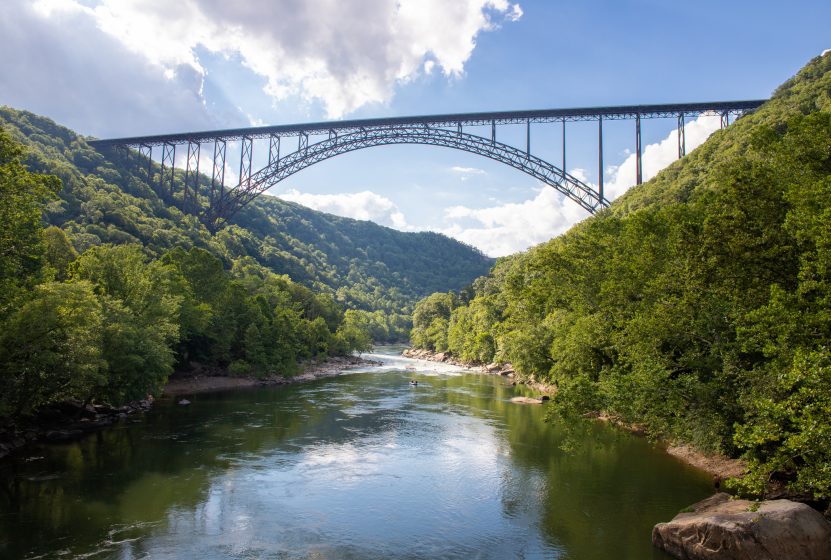 The new designation encompasses 53 miles of the New River and the tangled Appalachian forest around it. The area is crisscrossed with more than 50 miles of hiking and biking trails, railroad tracks, country roads, and the icon of the park: The New River.

Spanning the river is the New River Gorge Bridge: the longest steel arch span in the Western Hemisphere and the third-highest bridge in the United States.

The upper (southern) part of the New River primarily consists of long pools with Class I to Class III rapids. The lower (northern) section of the river is where the epic rapids live, ranging from Class III to Class V. These rapids are often jammed by large boulders, which require navigating strong currents, crosscurrents, and hydraulics.

In addition to providing world-class whitewater, the New River has also carved sandstone cliffs that have become an eastern U.S. climbing mecca.

The park has more than 1,400 established climbs rated between 5.10 and 5.12. The cliffs have hard Nuttall sandstone with an abundance of cracks and face routes with a few large roofs. Nearly all of the climbs are one pitch ranging between 30-120 feet in height.

Beyond thrilling sports and beautiful views, the park contains habitats of forest, wetlands, seeps, cliffs, and even abandoned mine portals. These mine entrances are home to several rare species, including the Allegheny woodrat, Virginia big-eared bat, and Indiana bat. Overall, at least 63 species of mammals and 48 species of amphibians call the park home.

Historically, many Native American tribes lived in the New River region, although the most prevalent were the Shawnee. It wasn’t until the 1600s that the first European settlers arrived. Most traveled through the area as hunters and fur traders.

By the end of the American Civil War, however, New River Gorge took on a new life as a coal mining epicenter. Over the centuries, the river had not only carved sandstone cliffs but also exposed four seams of the world’s highest quality bituminous coal.

The area around the park became home to more than 60 coal towns. Most of these are now relics and historical sites scattered around the area.

The park also features the African American Heritage Tour. This self-guided auto tour highlights the stories of black coal miners and railroad workers who helped define the region. The tour takes the visitor through 17 historical sites, including the John Henry Historical Park honoring the legendary battle between man and machine.