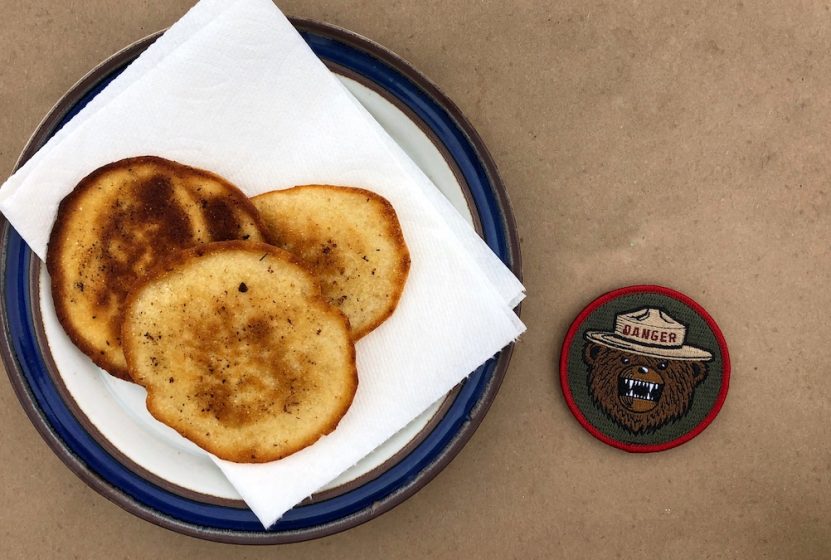 All around the world different civilizations and cultures have developed ways to get necessary and filling carbohydrates by making bread while on the go and/or from minimum ingredients.

Fry bread, tortillas, pita- some baked directly in the ashes of a campfire have kept people going for centuries.

Today’s Camp Kitchen recipe comes from an amalgamation of these recipes with a North American spin.

Hoe cakes are often thought of a southern dish, but probably go back further to American Indians who cooked ground corn mixed with water and possibly salt on hot rocks.

Over time the ingredients expanded and method morphed to what are known as Hoe Cakes, Johnny Cakes.

The food picked up the semi-misleading name of Hoe cake started as early as the 1700s. Some believe the term hoe cake came from the method of actually using the farm implement as the cooking surface. Others point to the term hoe being a common name for a flat griddle.

In 1793 “Rhode Island Johnny Cake” was used in possibly the first cookbook printed in the United States. Even Johnny Cake, may have been originally called Journey Cakes since they could be made in advance and eaten on the go. -Whatever you call them they are good!

The Hoe Cake batter is pretty much the basics of what you’d use to make corn bread. The Ingredient list is pretty straight forward and depending on what you have on hand can still be made with substitutions here and sugar and salt adjusted to taste.

1 Cup of Self Rising Flour

1 Cup of Cornmeal again self-rising if you have it or corn meal mix for making corn bread.

3/4 cup of butter milk- if yo don’t have it add a dash of lemon juice to milk.

1/4 Cup Vegetable Oil or Bacon Grease (We like the bacon method!)

Something to fry your cakes in: Oil, butter, or clarified margarine or you guessed it, bacon grease!

Combine all the ingredients and stir throughly to make sure you don’t have lumps. Should be a fairly thick batter.

Once your skillet or frying pan is nice and hot and you have your frying oil going start spooning in the batter a table spoon or two just like making pan cakes. As the cook they edges should turn golden and once the cake is solidified on the bottom where it can be lifted completely without breaking you can turn it over.

This again is up to your taste some people like them more “well done” just don’t burn ‘em.

Depending on the size of your pan you should be able to dow two at a time. As you cook your cakes you may have to add more grease, oil or butter as the cooking cakes will soak it up.

Put on a paper towel to take up the extra grease and then dig in.

Depending on your personal tastes and ratios of sugar these can be enjoyed with maple syrup just like a pancake or eaten along with more savory dishes like stew, chili or cooked greens.

Take your Hoe Cakes to the next level and make them a meal in them selves by adding grated cheddar, chopped jalapeño, green onion and chopped bacon (cooked you knuckle head)  into your batter. This makes your cakes even more filling and much tastier!

Cook the bacon first and then your skillet will have a nice layer of delicious bacon grease to cook in. Extra bonus- your cakes will pick up the cooked bacon bits on the bottom of the pan.

Once you get the hang of it you can substitute any left overs you have or try different flavor combinations like ground meat or sausage, ham, cheeses, onions and peppers.

Pro tip: Make your batter ahead of time and put it on a water bottle. It will keep in your ice chest or fridge for two days which is enough for a weekend campout., but we don’t think they’ll last that long!

One Response to Hoe Cakes