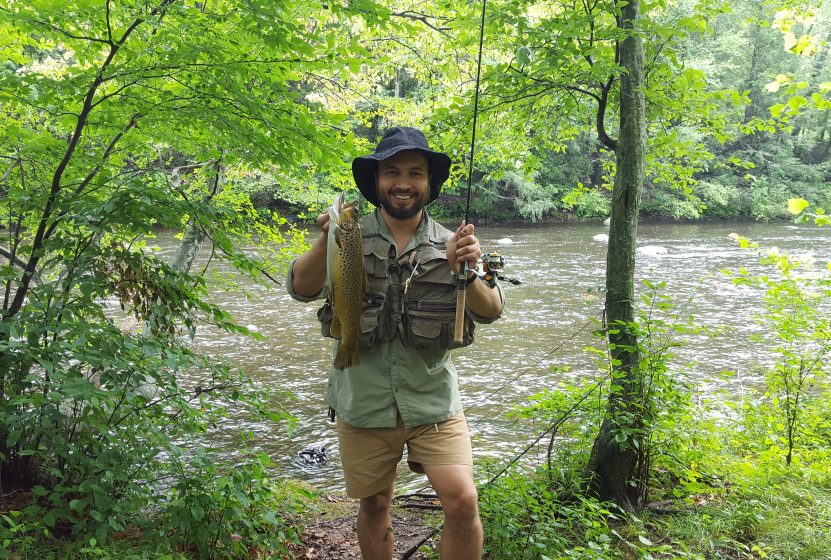 Farm-to-table restaurants and known direct sourcing of food is all the rage in the restaurant scene right now. Go to a steakhouse and you’ll hear from your waiter where the cows graze. Go to a coffee shop and you’ll likely see photos of the fair-market coffee harvesters carrying coffee sacks on burros and working the beans in roasters. People like knowing where their food comes from. Don’t believe me? Remember “mystery meat” from your high school cafeteria? I know I do and that is why I put that memory in the very back of my mind. Recently, I had a chance to take a great group of my friends out into the backcountry for a camping trip and demonstrate among other things, how I source food in a truly unique way. As someone who believes in sharing bushcraft skills and good food, my signature “bushcraft trout” is an eating experience I know they will not soon forget. 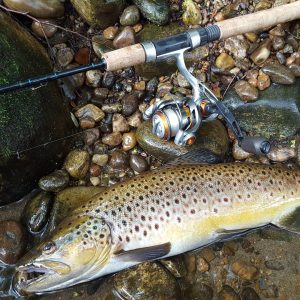 I live near one of the best trophy trout rivers in the country, the Farmington River in Connecticut. Having grown up in this area and having guided kayaking and canoeing on the river during my summer breaks from high school up through graduate school, I have a very good knowledge of where the big fish are and how to catch them.  On the camping trip I previously mentioned, my friends joined me to learn some of the bushcraft skills they know me for in my Instagram feed photos, Facebook posts, and in casual conversation when they ask me where I’m going and what I’m doing on the weekend. During that weekend, I wanted to show them the whole process of catching fish from the onset of collecting bait to the ending in wiping their mouths clean when all the meat is stripped from the fish bones.

After a torrential downpour at the start of the weekend, bait meant one thing: nightcrawlers. Even the rain that annoyed us earlier in the morning turned into a great group-building experience searching for crawlers under leaves and laughing in the process.

I showed my friends how to look for “worm poo” and how to rattle them out of the ground. The latter of the two steps involves driving a stick into the ground approximately 12-18 inches where there is plenty of worm poo near the surface and then tapping on the side of the stick. The vibration drives many of the worms out of the ground and they are easily picked up. Other times, we just turned over logs and flipped leaves over to find worms wiggling together and bouncing wildly to escape. My friends learned what “opening a can of worms” meant literally. In a short time, we filled an old worm container with a few dozen big and juicy crawlers with nice fat bands to hook into. 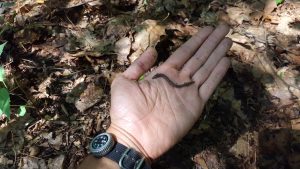 After collecting crawlers, I went right to my favorite fishing spot. Located behind the canoe shop not far from where we camp and…wait..I can’t tell you the exact location as it is a secret fishing hole. Once I arrived at my favorite location, I cast my line upstream and let it float down in front of a large tree that provides great shade even on the hottest days. The combination of a float, swivel, length of fluorocarbon with split shots, swivel, another length of fluorocarbon, hook, and worm was too much to resist. This hole normally produces a good 12 inch plus trout but on this day, I pulled out a brown trout that was approximately 16 or 17 inches using my crude end of the fishing pole to marking measurement system. As my friend Dave H. says, it’s “pert-in-nair” measurement as in pretty near that size.

After a respectable fight, I walked ashore to see my friends with my fish behind my back. They expected a guppie and were surprised when I delivered a fish large enough to share. After a brief fish cleaning demo where I demonstrated the process of removing the guts and examining the contents of the stomach, I told my friends I was going to cook them up something special. 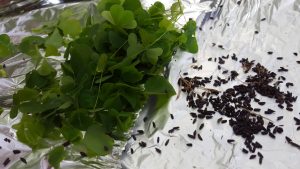 With my fish cleaned and set aside on some aluminum foil, I walked to a section of the property where we were camping where I had walked through earlier. At this spot, I located wood sorrel and garlic mustard. I collected a handful of wood sorrel and also trimmed some of the old garlic mustard seed pods. For those of you unaware, wood sorrel and all sorrels for that matter contain oxalic acid that imparts a lemon-like flavor. It is a great stand-alone trail nibble and it is fantastic in salads. In this circumstance, it was going to provide ½ of the flavoring of the fish I just caught. The garlic mustard seeds made up the second ½ of my flavoring. Mustard seeds are spicy and when cooked together, a “bushcraft lemon pepper” seasoning is accomplished. I took the sorrel and the garlic mustard seeds and filled the fish’s cavity with it before covering it in aluminum foil and placing it right on the grill over the fire. Anyone can use premade seasonings. Going out into the woods and finding everything needed really went over great with my friends. 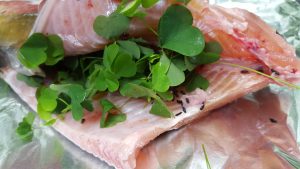 After cooking the fish sufficiently on one side, I flipped it over and cooked it on the other. Only occasionally did I test how done the fish was by slightly peeling back the aluminum foil. I didn’t add much olive oil (it actually isn’t necessary) to prevent sticking since the skin of the fish peels cleanly off when it is fully cooked. As hot as our hardwood fire was, it didn’t take long for the fish to cook and I removed it from the fire to portion it out. 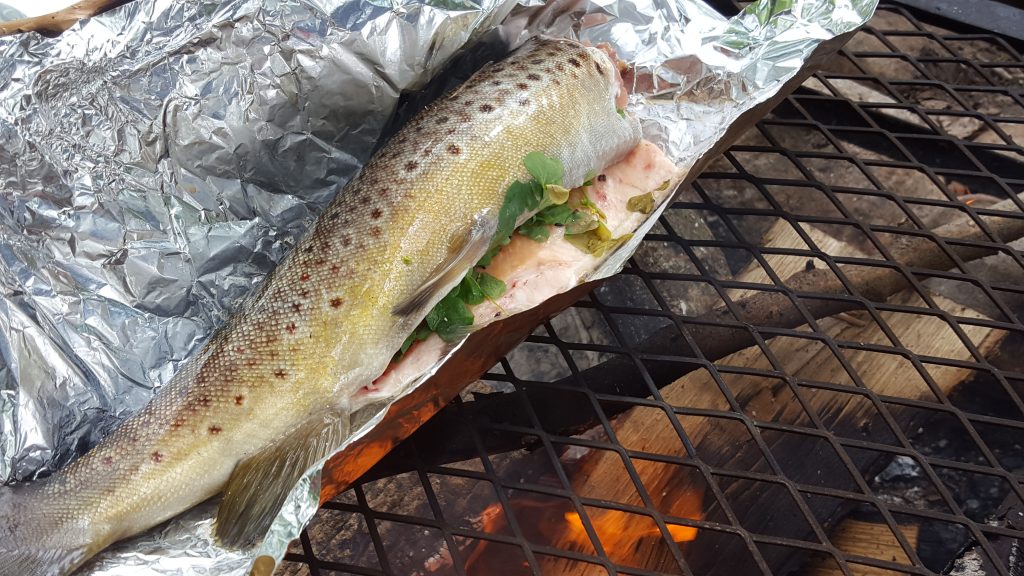 The great thing about catching a larger fish is that there was enough for everyone to try it. A larger fish has a good set of shoulders and this meat peels easily from the bones. The rib meat is also more substantial than a smaller fish and this too is worthwhile pulling away. In smaller fish, you really need to suck on the bones to access it. With something more substantial, the meat can be grabbed easily. Once one side of the fish was consumed, I flipped it over and served the other side. It didn’t take long before it disappeared too. Friends who eat fish regularly remarked how fresh it was and those who don’t even like fish commented on how they simply had to try it and when they did, they didn’t regret it.

To say, “the fish did not go to waste” is an understatement. I’m not saying this because all that was left was an intact skeleton. Not only was I able to give some caloric nutrition to my camping party, but I was also able to show how a person can source bait, herbs, and spices and fresh protein from the great outdoors. As much as we all love gear, I’m certain we all appreciate experiences equally if not more. In less than an hour, I showed a group of people how I do it, and sharing what I love with those who are willing to listen is what propels me forward. There was no waste in taking that fish. Friends shared a great meal together and a transferable skill set was passed along. I’ll take that dining experience to the trendy restaurants any day!