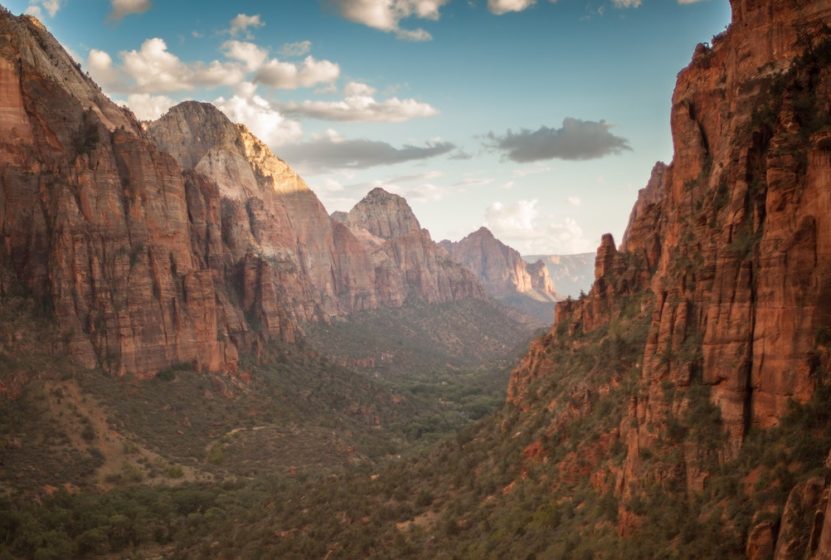 Zion National Park is located in southwestern Utah near the town of Springdale and can be accessed with a half-day’s drive from Salt Lake City and Las Vegas, Nevada.

The park represents the convergence of the Mojave Desert, Great Basin, and the Colorado Plateau. Although weather, seismic uplift, and volcanic activity have sculpted the park’s sandstone canyons, mesas, and peaks, the most influential force of nature here is the powerful flow of the Virgin River. Over millions of years, the river carved the park’s most iconic feature — a 15-mile long section of towering Navajo Sandstone known as Zion Canyon.

Zion’s geology represents 150 million years of Mesozoic-aged sedimentation. Throughout that time, the area was covered by shallow seas, lakes, and large deserts. The Colorado Plateau uplift that started 13 million years ago lifted the region about 10,000 feet.

Zion’s dominant flora include the boxelder, maple, willow, and cottonwood.

Humans have called the area home for nearly 10,000 years. Archeologists have uncovered artifacts from the Archaic culture that lived around Zion from 7,000 BC to 300 BC. The “ancient ones”, or Anasazi, resided within the park’s boundaries from 300 BC to and disappeared around 1200 AD.

The Southern Paiutes were the next to establish populations in 1250 AD and named the land Oawingwa — “a place where the stream flows.”

The Paiutes were later followed by Spanish explorers in their efforts to find a trail from New Mexico to California.

Mormon pioneers moved into the region in 1852 and named it Zion, which is Hebrew for refuge or sanctuary. Many of the park’s features were named by these early settlers: Towers of the Virgins, the Three Patriarchs, and Tabernacle Dome.

When explorer John Wesley Powell arrived in 1869, he honored the local Paiutes name by referring to the area as  “mukentuweap — “straight canyon.”

Local Mormon residents became outraged and saw the Native American name as an affront to their religious heritage.

Today, Zion National Park is America’s fourth most visited national park with more than 4.3 million people passing through every year.

Angels Landing is perhaps the most infamous hike in the park and is not for those suffering from acrophobia. The 5.4-mile roundtrip trail requires hikers to scale sheer and exposed cliffs with only the aid of a chain bolted to the rock. In some sections, the trail is only a few feet wide with 1,000-foot drop-offs on either side. A cautionary note: Precipitation makes the sandstone extremely slippery. Since 2004, eight people have fallen to their death along the Angels Landing trail.

Other hiker favorites include the eight-mile trail to the summit of Observation Point with a rewarding  270-degree view of the park. The Emerald Pools trail showcases a series of desert oases, waterfalls, and red rock cliffs.

Slot canyon fans can hike the Narrows and the more technical Subway. Both require a combination of wading, swimming, rock scrambling, and climbing to complete. Both also require permits and a keen awareness of local weather conditions. Even though Zion is in an arid region, water dictates every activity within the park. Even light rain miles upstream from the park can cause devastating flash floods through the slot canyons.

Zion’s epic sandstone canyons also give rise to the park’s monolithic cliffs which are world renowned among climbers seeking big wall routes. Due to the high summer temperatures, the best conditions for climbing are from March to May and from September through November.

Zion is home to three campgrounds with South and Watchman campgrounds located within Zion Caynon’s walls. The Lava Point campground is a one-hour drive from the park along the Kolob Terrace Road.

All campsites require a permit and the campgrounds are often full from mid-March through late November.